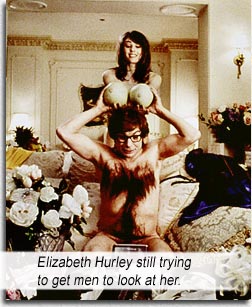 He’s the sexiest, swingingest secret agent ever to combat evil – DOCTOR Evil, that is…. mwohahaha ha ha ha….He’s Austin Powers, arguably Mike Myers’s greatest, most memorable, most embraced, most quoted icon – in the film that made it all shagadelic, baby! AUSTIN POWERS: INTERNATIONAL MAN OF MYSTERY is a hip skewering of the spy movie genre, taking especial aim at James Bond. The more you know James, the more you’ll love Austin.

Myers is Austin Powers: superspy, posh Brit accent, smashing fashion sense, a Byrds wig, unruly teeth, and a gigantic male… symbol draped around his neck. We meet him dancing in the streets of 1960s swinging London, and I think he’s doing The Froog.

Austin Powers’s nemesis is Doctor Evil (also played by Myers), a marriage of Donald Pleasance’s Blofeld (from YOU ONLY LIVE TWICE) and apparently, as Myers confesses, Lorne Michaels (his producer on SATURDAY NIGHT LIVE). Myers whipcracks it out of the park with Dr. Evil, for as everyone knows, a hero is nothing without the villain who loves to hate him. And Myers immortalizes his hero and villain by imbuing them both with equal amounts of thunderball mojo.

In the opening 1960s sequence, Dr. Evil escapes Powers by cryogenically freezing himself in an orbital rocket. So Powers volunteers to freeze himself as well, to combat Dr. Evil should he ever return to Earth. In the 1990s, Dr. Evil returns to Earth, and Austin is unfrozen to combat him; an old-world-hero for an old-world villain. (Yes, it’s the plot to 1993’s DEMOLITION MAN, only more froogy.)

Dr. Evil sets up his underground lair in Nevada and tries to blackmail the world governments for “one MILLion DOLLars!” at which point his Number Two (Robert Wagner, brilliantly playing it straight) advises him that one million dollars isn’t much these days. When he changes his ransom to “one HUNdred BILLion DOLLars,” we start to twig to this movie’s hook. It is part spy spoof, part fish-out-of-water, all Swedish-made penis enlarger.

Meanwhile, Powers is having his own revelations – that the 90s are not as promiscuous as the 60s he left behind, and the slinky flirtations he engaged in with his previous spy partner, Mrs. Kensington (tightly leathered Mimi Rogers) are wasted on his current salubrious spyhard, Mrs. Kensington’s daughter, Vanessa (achingly beautiful Elizabeth Hurley), a 90s woman, i.e. repressed and uptight about her sexuality. (Which might explain Hugh’s wayward thrust with that Hollywood Boulevard skank. As Bill Maher has noted, “The most beautiful woman in the world – somebody’s sick of fucking her!”)

The innocence of both hero and villain in a world that has left them behind is this movie’s greatest hook. Snappily written by Myers and directed by Jay Roach like a man, man!