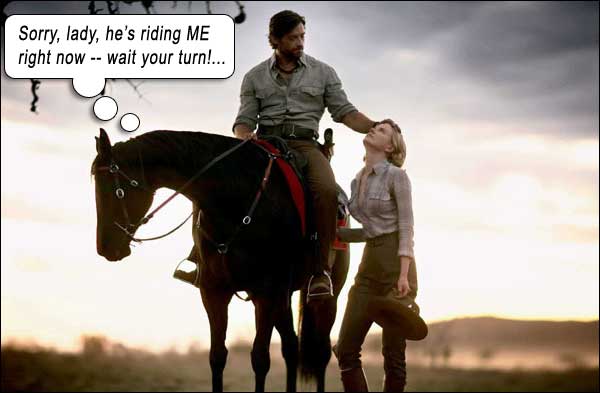 Being a son of Australia, this movie was calling to my blood. I had to watch it, right? I had to know it, feel it, taste it. And report back on whether it hides behind the faux-Aussie Outback Steakhouse jive, or whether it truly captures the wild frontier Dreamtime spirit of Downunda; the vast ochre countryscapes, the earthy indomitability of the fledgling nation… and Hugh Jackman’s sky-tanned, whip-leathered, torpedo-ripped, v-shaped body.

All of the above… No fake Outback Steakhouse accents in sight.

You’ve gotta have some ballsac to name your movie AUSTRALIA. It better be as epic as the story that drove a continent from convict colony to commonwealth.

Set in 1939, on the threshold of World War II, directed by Luhrmann, AUSTRALIA is a fitting update to the lowbrow image that CROCODILE DUNDEE burned into a blinkered world in 1986.

Kidman is Lady Sarah Ashley, who travels to Darwin in Australia’s Northern Territory, to hold onto her middle-of-nowhere property against the clutches of land baron King Carney (Bryan Brown). She finds herself in a massive cattle drive with a ragtag team of drovers, led by a man known as Drover (Jackman, doing some fine tragic acting over and above his bacon).

What can a man say about Hugh Jackman without going slightly bi-curious in the process? I’ll try. I counted at least seven Superhero Entrances, three Sexiest Man Alive pose-downs and lost count of the times I was caught looking at his gun-belt slung so low that I accidentally imagined his package brushing against my naked face. (Failed again with that “bi-curious” thing…) 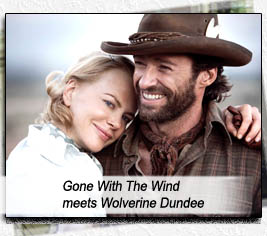 We meet Wolverine in a barroom brawl – big surprise! – biceps thrumming and wisecracks humming, his native Aussie accent so broad and true-blue I was flat out like a lizard drinkin’ tryin’ ta catch the Strine. Snooty Lady Ashley’s outspoken British disdain for this rowdy bushman tells us they are soon going to be tonguing breathlessly in the moonlight or dancing in the rain or running tearfully towards each other with uplifting music swelling the soundtrack.

Again: all of the above.

But now comes the element that separates this sloppy love story from its many mindless hormonal Teen Model copies.

It’s not just the soaring cinematography (AUSTRALIA must be viewed on the widest of wide screens); it’s not just Nicole Kidman’s padded baseball breasts straining against harsh schoolmarm blouses (eternally 23 years old, how come she has no pores?); it’s not just exhibiting bravery in killing kangaroos (the equivalent of killing American bald eagles – like the eagle, the kangaroo is a national symbol, but to a whole native people, the kangaroo is merely food); that which separates AUSTRALIA from the conveyor belt of epic, sweeping, tiresome love stories is… the Dreamtime – the rich, mysterious Aboriginal culture…

…embedded in this movie like the trail dust under Drover’s taut-buttocked saddle. Personified by the regal David Gulpilil, veteran Australian Aboriginal legend, playing an old-world tribal loner named King George, in touch with The Land and destiny in ways we “civilized” muckies cannot fathom.

Dr. Strange got nuthin’ on the Dreamtime!

And 12-year-old Brandon Walters as Nullah. In his first feature role, this young Aboriginal with the golden-black hair dominates the screen with confidence, frailty, innocence and empathy. The film is his – he stands as tall as Kidman and Jackman. He narrates from his perspective as the bastard son of a “white fella” and an Aboriginal, a half-caste the bigots call “creamy.” Nullah attaches himself to Lady Ashley after his mother dies; together with Drover, they form an informal family unit. (And Drover is not just a shallow white fella – his best mate is a “black fella” (David Ngoombujarra) and his deceased wife was that mate’s sister. The racist townsfolk consider Drover a black fella – which makes for a great excuse to start barroom brawls.)

AUSTRALIA marries the three disparate elements of Australia – the pompous city (Kidman), the rugged country (Jackman) and the beating blood of the land (Walters) – in one inadvertent family thrown together by range war and world war. It is heartening that Luhrmann and his co-writers (Stuart Beattie, Ronald Harwood and Richard Flanagan) remembered that all these elements together shaped the Australia we know today.

Never has there been an Australian movie that gives such respect, acceptance and influence to Aborigines. Which makes this film an old-fashioned epic with new-fashioned values.

AUSTRALIA comes with two happy endings (not counting the scene where Hugh Jackman pours a bucket of water over his nude beefcake). Ending #1 finds Lady Ashley, Drover and Nullah settling on her hard-won property (after that dance in the rain), but instead of the credit roll which would seem fitting here, we get – WAR! And land baron King Carney (your average “twirling mustache” villain) is succeeded by his henchman, Fletcher (David Wenham), who is truly monstrous – the type who would gun down his own son for financial gain.

Stakes are ramped up as Fletcher almost destroys Lady Ashley, while sending his own illegitimate son, Nullah, to a boys’ home on Mission Island. Which the Japanese immediately bomb. 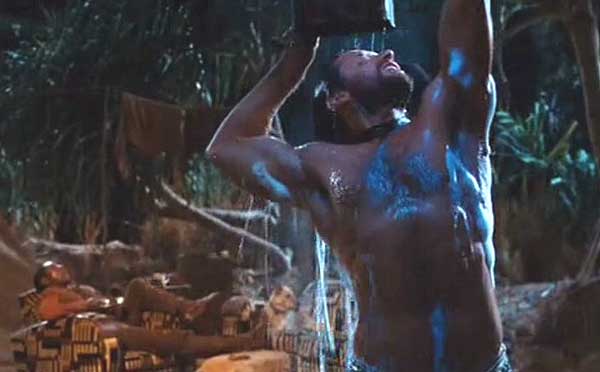 Whole third act is a tearjerker movie in itself, as everyone thinks everyone else is dead, leading to the inevitable “running tearfully towards each other with uplifting music” moment.

In a horrifying display of callousness, Fletcher tries to shoot Nullah, his own estranged son, until King George – a ubiquitous mystical presence throughout the movie – descends on him like a bird of prey. You will never again use the word “spearchucker” as derision.

Despite terribly inauthentic lighting, some iffy green-screen (worst offender is Nullah staring down stampeding CGI), and the mystical “I will sing you to me” moments involving Over the Rainbow, AUSTRALIA is a cry of elation for a southern desert land that was seemingly conquered by Hollywood with the DUNDEES, now reclaiming its mystery and majesty; a complex tale of three worlds in harmony, gleefully destroying Australian archetypes and shaping brave new ones.

Ending #2 is the bravura stroke, as Nullah goes a-Waltzing Matilda into the Australian bush with King George, on “walkabout” (Aboriginal transition to manhood). Luhrmann could have easily opted for a crass generic scene of two white lovers riding slomo into a red sun; rather, this movie is Nullah’s journey, Lady Ashley and Drover watching him fade into manhood, as a magic hour sunset burns into the sad horizon…