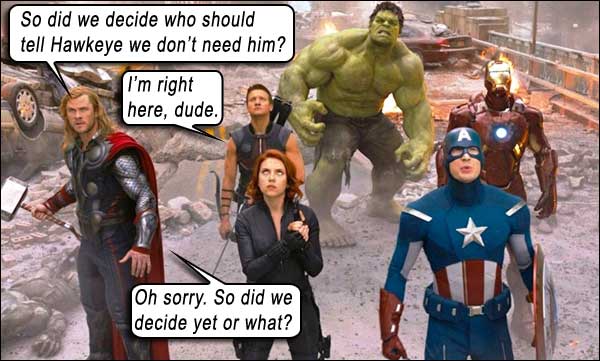 The god Loki (Tom Hiddleston, Brit-leering and still looking like Data from STAR TREK GENERATIONS) has come to Earth from Asgard to conquer and destroy. And Earth’s mightiest heroes are there to punch him a lot.

Seems kinda ineffectual and unimaginative that against literal magical/divine foes, the best retaliation that can be mustered by the writers of this mega-superhero tale (Zak Penn and Joss Whedon) is that the heroes “punch” demons flying around on bad motor scooters. (Even the grand resolution, though a jaw-dropping sequence, is nothing more than the old “destroy-the-source-to-destroy-the-minions” gambit.)

And what does Loki want with Earth anyway? As we saw in THOR (2011), Asgard was a pretty bodacious LSD-colorized dazzlegarden. Is he here for the fabulous Grilled Prime Côte de Boeuf at Spago? Is Loki after our Arab oil? Our blood diamonds? Our white women? Taking his cues from Dick Cheney, his plan seems to be conquest for the sake of conquest, no exit strategy, no goal. And he’s using a cutting-edge science concept to do it: the tesseract (or hypercube theory), a wormhole joining two distant points in spacetime. Loki allies with a croaky guy named The Other (whose helmet looks like it was fashioned from dog turds) and they order their Chitauri demon-riders to spurt through the wormhole to Earth and break things. Some plan!

Dim plot aside, THE AVENGERS is overseen by Marvel (the studio that can do little wrong when pumping out A-List superhero blockbusters) and fashioned by writer-director Joss Whedon (the man from FIREFLY, who can also do little wrong with his iconoclastic approach). Highly enjoyable/dimwitted movie experience ensues.

Not only are there big stupid CGI whale-things and Pretty Orange Explosions aplenty, there is heart and poignancy and humor, uncertain alliances between heroes, petty arguments, snappy dialog, human frailty and godlike wrath. And Scarlet Johansson’s leather pearbottom. 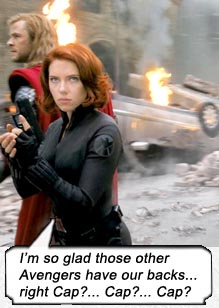 Whedon does it again – imbues this ostensibly kickapoo punch-em-up movie with real personality. Even if you did not meet the individual heroes in their own films over the past few years, they are each presented as a throbbing personality crisis, no emotion spared. Except maybe for Captain America/Steve Rogers (Chris Evans), whose wooden delivery makes us suspect he landed this job on the cerulean dreaminess of his eyes. You see, he’s frozen his facial muscles in place, for fear that if he moves them one iota, he’ll stop looking like a Chippendale’s dancer. And Jesus! – look at the size of his biceps!

And then we see Chris Hemsworth‘s biceps – and they’re even bigger! Hemsworth brings the hammer as thunder god Thor on rad steroids; half-brother to Loki, and therefore forced to speak in a British accent (for an Aussie, that’s an eternal annoyance).

Robert Downey Jr. is Iron Man/Tony Stark, now plonking his ginger assistant Pepper (Gwyneth Paltrow cameo), and bequeathed the best dialogue; so cheeky, arrogant and sarcastic that Brad Pitt called from OCEAN’S ELEVEN and wanted his insouciance back. His armor is the damned coolest thing about this movie, and when he is flying around firing his hand-blasters at demons, his power is awe-inspiring. Now if only he had an iron pearbottom…

Samuel L. Jackson is Nick Fury, director of S.H.I.E.L.D. (which stands for Stupid Homeland Idiots Evoking Love of Dicks); he’s been elevated from that of annoying harbinger of doom in post-credit Marvel cameos to annoying harbinger of doom in a starring Marvel role; wearing his custom leather, eye-patch flaunting, flying around in his invisible aircraft carrier like a pimp, and constantly whining that Earth can’t handle these threats so we have to assemble a team that can. May I suggest Craig’s List?

As soon as Fury assembles Captain America and Iron Man, Thor descends from Asgard and they all get into a threeway, pounding each other in the forest as only men from Craig’s List can. Thor wants to take his brother Loki back to Asgard for some of that sweet Asgardian justice, but Tony and Steve want to punish him right here on Earth with their totally functioning American Justice System that also works on gods. (I wonder what his bail will be set at – 4,000 Asgardian shekels?) After they decimate more of the forest than any super-criminal trying to destroy the environment, they agree to disagree that Hemsworth has the biggest biceps.

Hulk/Bruce Banner is dork-cool Mark Ruffalo. Love that guy; perfectly cast as the most unruffled guy in the room (unruffaloed?), even though harboring the most internal rage. In this third major movie featuring the Hulk (after HULK and THE INCREDIBLE HULK), he can apparently change green and fluffy at will. “That’s my secret – I’m always angry!” (Hey, I must be a Hulk!) Banner and Stark engage in much tech jargon that means absolutely nothing, but their quiet moments are powerful, almost poignant. Matter of fact, all the heroes have their quiet time for feelings, which director Whedon effortlessly makes compelling, and their dissent is the most interesting element of the movie, especially Steve’s and Tony’s argument about “Take that suit off – what are you?” “Go get your suit on!” “No, *you* take your clothes off!” “No, *I’ll* take your clothes off!” etc. Marvel Comics was always canny at creating Marvel Team-Ups where the moral ambiguity of the situation set heroes at odds with one another – and Whedon somehow captured that lightning.

Down the list, we have archer Hawkeye/Clint Barton (Jeremy Renner), who can apparently claim superhero status because he has good aim and his arrows explode. I guess Rambo can fill out that application form then. Renner was apparently unhappy with his role, because he signed up to be a superhero and for half the movie, he is a possessed bottom bitch for Loki. He is brought back to his senses when his woman bashes his head on a metal pipe, which is the correct way to bring a man back to his senses. Hawkeye and thigh-jitsu expert Black Widow/Natasha Romanoff (Scarlett Johansson) have been re-rendered by this movie franchise as two CIA assassins with a spanky sexual tension. One would think these two mere humans would get lost amidst the super soldiers, iron men and gods, but again, Whedon can even turn focus to their little patticake moments without losing our interest. And did I mention Scarlett Johansson’s leather pearbottom?

Clark Gregg appears for the umpteenth time as SHIELD Agent Coulson, now with a first name, Phil, and a predilection for Captain America trading cards (like the rest of us he-men, going bi for Cap’s biceps). Two of the film’s surprising touching moments involve Coulson’s trading cards and his first name. Further, deponent sayeth not. “…and this one’s for Phil!…”

All the subtle details that make THE AVENGERS a class act: 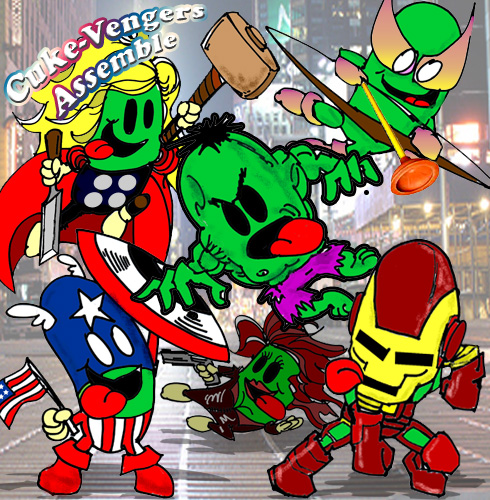 As much as these super beings inspire us to be more than we can be (pansy do-gooders), there is something very dangerous about their existence. Modern comics in the ’80s started addressing incredible power coupled with vigilantism. And in this movie there are dark overlords whom Nick Fury answers to (featuring Powers Boothe and the spunky Jenny Agutter, now sadly old) who want the Avengers on a short leash. Bruce Banner knows the danger when he argues, “We’re not a team, we’re a time bomb!” And that is true for any entity with inordinate power and no constraints on that power (cough-American military). Whether Whedon and Penn intended for that statement to be political, it hits home in this belligerent nuclear age, where the constraints to using/abusing America’s military forces have been eroded since Reagan’s Iran-Contra treason. It hasn’t been drawn down through any American administration since, only exacerbated.

Loki (suffering from General Zod Syndrome) tells the kneeling humans before him, “Freedom is life’s great lie!” Coupled with the above time bomb analogy, we recognize something deeper in this movie than just punching. It’s small, but it’s there. [Poffy: “That’s what SHE said.”]

In the final telling, THE AVENGERS will thrill with its stunning action, thoughtful characterization, and the simple fact that Marvel managed to cram all these colorful icons onto one bombastic piece of celluloid. And did I mention Scarlett Johansson’s leather pearbottom?…

Now let’s talk about that dicky poster. What a mish mash pish posh! Like the marketers were trying to squeeze all their franchise properties into a space they didn’t want to pay for.

• Why isn’t Iron Man wearing a helmet?! Myriad reasons, all to do with marketing to what they regard as their exceedingly dull target audience.
• Why is Captain America – also maskless – three stories tall?
• Why is Hawkeye in different lighting?
• Can it be composed any more arbitrarily?
• Did they fire their art director before letting a boob Photoshopper loose on this quack scenario?
• Who hired this useless guy?
• And can he get ME a job at Marvel? 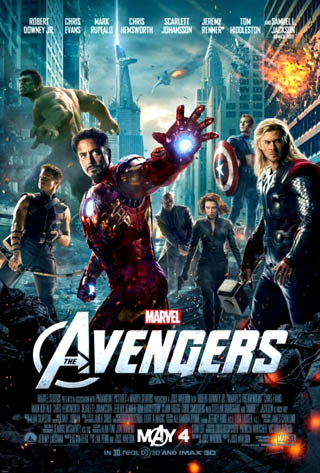 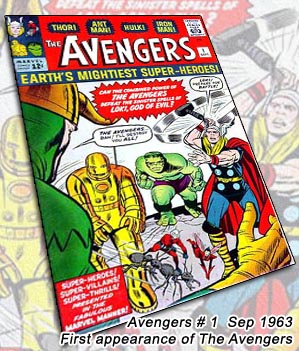