That Magnificent Man and His Flying Machines.

A powerful biopic of sex, insanity and aeroplanes. In any order. 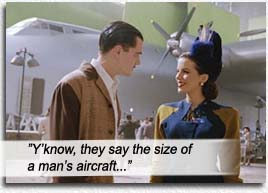 Martin Scorsese directs THE AVIATOR based loosely on the life of Howard Hughes, with Leonardo DiCaprio adequately filling the shoes and flying the skies of the eccentric billionaire. (Leo’s star status slightly distracts, as does his phony accent. Jim Carrey – originally slated for the role – would have pulled off a better visual hook; young Hughes resembled Tyrone Power more than Leo and the older mustachioed Hughes looked more like Bernie from WEEKEND AT BERNIE’S.)

Set in an era when Scarface was Paul Muni, not Al Pacino; when Hell’s Angels were the U.S. Air Force 303rd Bombardment Group, not the guys who killed Meredith Hunter at Altamont; when Jane Russell, not Pam Anderson, was the dirtiest thing on two boobs, THE AVIATOR (written by John Logan) follows Hughes from his halcyon days of filming his revolutionary WWII flying aces film, HELL’S ANGELS (which would cross over from the silent era to sound, featuring flying sequences to curl toes and splice spleens, and making its star, Jean Harlow, a household name), to his political swashbuckling with airliners and aeroplane building, to his starlet-hopping, to locking himself in his germ-free room drinking his own urine. There is probably not enough time in any feature film to encapsulate the storied misadventures of Hughes, so the breakneck plot touches on everything it can in the time allotted.

That Magnificent Cucumber in his Flying Machine

The film’s narrative flits from one vignette to another, almost as if mirroring Hughes’ creatively spasming mind: scandal over starlet’s flesh (with Ian Holm giving a grand, impromptu lecture on how much boob exposure is too much); many OCD episodes, from being unable to eat meat once an uninvited guest touches his plate, to suddenly obsessing over washing his hands and then not wanting to touch the bathroom door to exit; electronically bugging his lover’s house through jealousy; his aeroplane crash which took off tops of houses in Beverly Hills and left him crippled; his political battles over the largest plane ever built, the H4 Hercules, which flew only once in 1947, with him at the controls…With the ultimate phallic symbol at his fingertips, is it any wonder Hughes made mile-high headlines with Ava Gardener (Kate Beckinsale – mm! lovely!), Katherine Hepburn, Ginger Rogers, Jean Harlow, (insert any starlet). We can surmise that they didn’t fall at Hughes’ feet for his looks alone, but because he could literally fly them to Paris for lunch. The movie portrays Hepburn (Cate Blanchett) as a main squeeze, when in reality she was just another fling. Her character is intimidating enough to throw Hughes momentarily, “Men can’t be friends with women – they must possess them, or leave them be.” Though she burbles truth, she can’t live by her words, as her whole ideology breaks down once she settles in as Howard’s toy.

Unable to sit still and contemplate anything wisely, Hughes’ many mental problems contributed to his diving into unfinished projects, obsessing over small details when the madness took him. He was also a racist – but pretty Leo can’t be a racist, so we never see this side of him.

At a party, two suspicious characters shadow Hughes, who asks his aide, “Who are those guys? Do they work for me?”

“Everybody works for you, Howard.”

Power like that is almost as beautiful as Leo himself.