Even in Spain, there’s a Deep South.

Shades of STRAW DOGS and dabbles in DELIVERANCE, THE BACKWOODS is an exploration of deep south justice – in Spain. 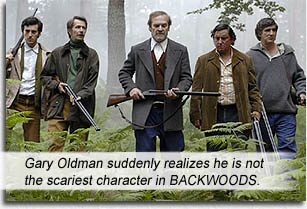 Two Brits with their European wives holiday in the backwoods of Spain; Paul and Isabel (Gary Oldman and Aitana Sánchez-Gijón), and Norman and Lucy (Paddy Considine and Virginie Ledoyen). The two men go hunting one day and come across a malformed little girl chained prisoner in a disused, ratty hovel.

It’s the freakiest scene in the movie. Obviously this little girl is being kept alive by someone – so though we fear her “crazy flipper fingers” (she sure plays a mean pinball), we must fear even more the people who are keeping her like an animal.

Paul and Norman never think of this, and remove her to Paul’s rustic cabin, intending to take her to a hospital. Let the moral ambiguity begin…

The villagers come a-lookin’ for the little girl, suspecting that Paul and Norman know something they’re not telling. They’re right, of course. But are the villagers right in their treatment of the girl? Should the British couples just walk away, turn a blind eye and leave the villagers to resolve their own sociological problems?

After leading Paul into the woods, the villagers go STRAW DOGS on Norman’s wife, Lucy, who “asked for it” quite explicitly by walking into the local bar upon her arrival in town, wearing a see-through dress.

THE BACKWOODS is an uneven production, alternately slow-moving and riveting; the malformed girl and STRAW DOGS rape scenes are compelling and wondrously violent, while the character studies of the two British couples trying to rejuvenate their flagging marriages are not so.

The villagers continually warn that the outsiders should not have stuck their noses into Backwoods business. And though this Euro production’s resolution is violently non-Hollywood (which raises its quality somewhat), we kinda agree that the filmmakers should have taken the villagers’ advice…