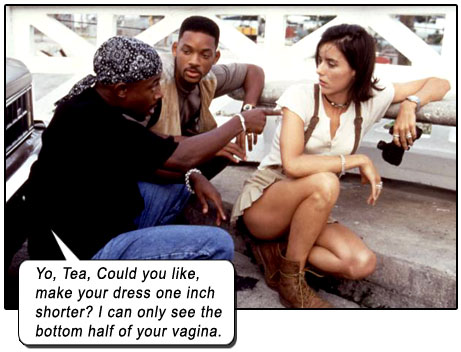 When it’s bad being Bad.

Geez, I hope no one confuses the sex appeal and street-kewl of these Hollywood-ized detectives with the misinformed rednecks that are real cops. Too late…

BAD BOYS Martin Lawrence and Will Smith are two comedians trying to make drug busts in Miami (which is basically a description of cops in Miami). On the tail of a 100 million dollar shipment for Euro badness Tchéky Karyo, they must also rescue mega-hotness Téa Leoni as a murder witness, must keep Lieutenant Joe Pantoliano out of their pantolianos, dodge Internal Affairs sexpot Marg Helgenberger, and placate Martin’s nagging wife, Theresa Randle. Their “theme song” is Inner Circle’s Bad Boys…

Michael Bay directs in his film debut, and we see all those swooping camera moves and slomo hero shots that would become a staple of his style. Maybe he was a natural extension of his predecessors, maybe a creature of his era? Maybe a copycat of some obscure European director, or a pioneer? I don’t know; I just know that this bombastic Pretty-Orange-Explosion, low-angle, guns-and-cars-and-cheese motif would inform the bulk of Hollywood blockbusters in the decades to come. We must admit, for all the chickendipshittery of it all – it looks great, with the production team of Jerry Bruckheimer and Don Simpson helming the slick affair, with a lotta laughs from the easy chemistry between Lawrence and Smith, and edge-of-your-seat thrills from Bay’s swooping cams. There’s no way we’ll ever confuse this glossy afterburner with the grit of DIRTY HARRY or the breeze of LETHAL WEAPON.

The title of the movie itself is a massive case of reappropriation (the act of taking an insult and claiming it as a badge of honor, like headbanger, jarhead, gay, etc.). Bad Boys was a 1987 reggae song that referred to criminals as “bad boys.” However, after it was misused/overused as the COPS TV show theme song, its perception was twisted and seemed to apply to the cops as “badasses.” In fact, this movie uses the song blatantly as the epithet for Lawrence and Smith’s badass quipping buddy cops; they actually sing a snatch of the song as they roll in their souped-up Porsche 911 Turbo II 3.6. That’s what Hollywood calls realism.

But cops, policemen, baconators – whatever you want to call them – are NOT your quipping pals who would judiciously discern you are not a “bad boy” and let you walk if they accidentally bumped into you on the street or near a crime scene. And whenever you call the cops for any reason, make sure all your alcohol is hidden, all your drugs are flushed, all your porn is stashed, all the bruises on your girlfriend’s arm from Krav Maga are covered, all your traffic tickets are paid, all your clothes are expensive, all your headlights and blinkers work, all your house is painted… or they will find some reason to arrest you and/or beat the shit out of you and/or taser you. And if you’re black, then they’ll really fuck you up.

So although many cop movies are classics and highly enjoyable, cops are NOT the discerning, judicious humanitarians they are usually portrayed as. They are trained to be merely apprehenders of suspected perpetrators. They are trained not to judge, not to deliberate, not to execute. Just bring the perp in, so the SYSTEM can do all that. But it’s media like this that makes the cops think – incorrectly – that they are allowed to have discernment and an opinion and a knee on someone’s neck.

In the world of BAD BOYS, we are rooting like zealots for the cops – family man Marcus Bennett (Lawrence) and sex machine Mike Lowrey (Smith) – to track down the drugs and save the dame. And do unimaginably stupid things along the way that only Hollywood can get away with, i.e. married Marcus masquerades as the womanizer Mike Lowery so that witness Julie (Leoni) will trust him with her life. It’s not enough he’s got a badge and gun, now he’s gotta have a slap-happy tool as well. Or how about taking a page from TANGO AND CASH: Marcus is a millionaire who owns that Porsche, but still does The Job so that the other guys on the force won’t think he’s coasting through life. Hey, I got an idea: why not leave the frickin’ force and coast through life?

Watch for Michael Imperioli (soon to be Christopher from THE SOPRANOS), Anna Thomson (the cut whore from UNFORGIVEN), Kevin Corrigan (as a geek scientist, before joining the Seth Rogen clan).

And you don’t really need to watch for Téa Leoni – you can’t miss her – as the screen is seared by her absolute flawless porcelain perfection and neck-crushing thighs, which the producers were canny enough to keep exposed up to the point of vagina. I thank you, Simpson/Bruckheimer! And my bad boy thanks you.