I Didn’t Shit Right For a Week.

So filthy. So disgusting. So irreverent… So funny. 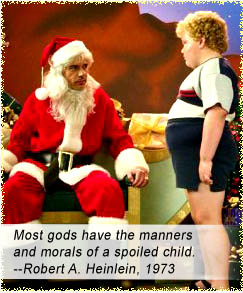 Billy Bob Thornton gives new meaning to “Santa Claus is coming to town” as a drunken, lecherous, foul-mouthed thief posing as a department store Santa with his accomplice elf (little person, Tony Cox), only to rob each store that employs them.

BAD SANTA is THE funniest film about that maudlin end-of-year idiot season, told with leering gusto and outrageous bravado by director Terry Zwigoff and writers, Glenn Ficarra and John Requa. This ain’t ELF (2003).

It would help if you just didn’t tell your parents you were watching BAD SANTA. Even if you’re an adult.

Until he meets Thurman. Thurman Merman (Brett Kelly): the model that evolution used for all neo maxi zoom dweebies. Thurman is 10, chubby, picked on by older kids at school and holds an unwavering belief that this is really Santa, against all the denials and derogation Santa hurls at him. He is almost a stalker – actually, he IS a stalker, who intervenes and saves Santa’s life when Ajay Naidu makes a cameo as a Hindustani Santa-hater and tries to ass-rape Santa while maintaining vociferously, “I’m not gay!”

I’d like to say Santa’s heart is quaintly thawed by neurotic young Thurman and his advent calendar and the gift pickle carved from wood and colored with his own blood, but, well… you can see it ain’t that quaint.

Santa hides out in Thurman’s house, drunk, plonking the Santa-fetish bargirl (sweet Lauren Graham) and stealing Thurman’s chocolates from his advent calendar. The turning point comes when Santa stands up to Thurman’s bullies, surprising himself that he could care for someone other than himself.

Hang on – it still doesn’t get quaint. It just gets drunker. And ends with a pink elephant.

John Ritter (in his last role) is the perturbed store manager who is too afraid to fire Santa and his elf for fear of pc repercussions, empowering security manager Bernie Mac to do it – who doesn’t fire them but blackmails them for a piece of the action.