It’s commendable that Cameron Diaz would go to such great lengths to portray someone so despicable and “ugly,” but BAD TEACHER doesn’t do her any justice, being even more despicable and ugly. 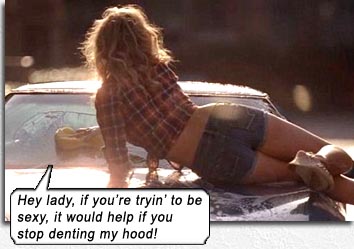 Foul-mouthed gold-digger Elizabeth (Diaz) takes a teaching job for a year while she cultivates her sugar daddy into marriage. When he dumps her before the big day, she must blondly support herself while searching for a new daddy, so returns to teaching – inexplicably, as she hates, neglects and mistreats the kids and has no respect for the school syllabus, so we assume it’s the only thing she knows how to do standing up.

As Elizabeth whiles away the school days smoking pot, sleeping at her desk and letting her students watch movies instead of study, she becomes obsessed with the notion that bigger fake tits will aid her quest for a rich john. She’s right, of course. Bigger fake tits will aid a woman in ANYTHING, not just the quest for a sugar daddy. The movie implies that due to Elizabeth being shallow, fake tits are shallow too, and don’t solve anything. Firstly, in Elizabeth’s milieu (that of a young woman coasting through life on the wallets of others – i.e. 80% of women today), fake tits solve almost everything; secondly, in EVERY milieu, they are a free pass to food, drinks, cars, homes, you name it – they make men listen to your mindless chatter for hours, they garner you compliments on dresses, shoes, necklaces, bikinis, when all we want to say is “Nice TITS!”; doors are opened, literally and figuratively; help with your luggage? wanna get a coffee? the cop let you off with a warning? need me to move that couch? Who is this movie trying to fool?

Jason Segel is a down-to-Earth gym coach who has eyes for Elizabeth but is not on her financial radar. John Michael Higgins is the school principal with an almost lustful affinity for dolphins.

British Lucy Punch is fellow teacher, slightly batty Ms. Squirrel, who turns into a rival of Elizabeth’s for the affections of a rich new teacher, Scott (Justin Timberlake). Punch and Timberlake salvage what little they can of their poorly-written roles, and almost save the production; most amazing thing about Punch is that she is ample-busted yet genuinely funny – how rare is that?! – usually blond, here lusciously red-headed, doing an impeccable American accent. And Timberlake, we find, is quite gifted at comedy, but then, he’s been making us laugh since he was in ‘N Sync.

The person most responsible for this failed attempt at dark toilet humor is the miscast Cameron Diaz. She is not funny. Never has been. She is a fine actress, and plays drama well (BEING JOHN MALKOVICH, THE BOX), but she just doesn’t sell her comedy character, because – as is always the case – hot women cannot pretend to NOT be hot. They cannot have it both ways – Elizabeth cannot supposedly be so good-looking that men trip over themselves to be near her and then also be stuck as a lowly middle school teacher. Ironically, Diaz really IS ugly, but we know the filmmakers would have us believe her character is only ugly on the inside and BEE-YOO-TI-FUL on the outside. So if she really wanted out of the lower class treadmill, why doesn’t she use what God has given her and strut those buns and that bucket mouth into an upscale bar in Bel Air? Or why not use what Al Gore has given her and use the internet to look up sugardaddy.com?

Elizabeth begs, borrows and steals money for her boob job, using her leering legs and peekaboo pear-cheeks like the prostitute she is, along the way making a mockery of the school system. It’s not the mockery of school I have a problem with, it’s not the prostitution, it’s not the drugs, swearing or sex, it’s not even the fact that Diaz is a one-dimensional actor – it’s the sudden flip-flop of Elizabeth’s heinous character. Writers Gene Stupnitsky and Lee Eisenberg (of the lame U.S. version of THE OFFICE) didn’t bother putting signposts along the way to this slut’s redemption. They simply decided to take a left turn when the script reached its page quota. And why is Jake Kasdan (WALK HARD) directing this trash?

We just KNOW that Elizabeth will never get that boob job because that is the device that drives her slut mode. This anti-hero would somehow have to turn into the hero, or test audiences would have a hissy fit and Sony Pictures would never distribute this offal. So the filmmakers sacrifice Ms. Squirrel, making her the villain to Elizabeth’s “unconventional” anti-hero, simply because she was trying to expose Elizabeth’s venal agenda. It’s a jaw-dropping display of lazy scriptwriting.

I’d hazard a guess that those two TV writers probably took screenwriting classes with bad teachers like Cameron Diaz. But probably not that ugly. And if those classes were in Hollywood, the teacher already had fake tits.