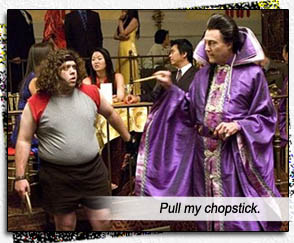 Starring Dan Fogler, George Lopez, Maggie Q, and the guy who does the second best Christopher Walken impersonation in the world – Christopher Walken (dressed like a geisha slut and sporting a ‘do more audacious than Gary Oldman in BRAM STOKER’S DRACULA).

Walking that fine comedy line just above Adam Sandler and Will Ferrell, BALLS OF FURY is so wilfully asinine it succeeds.

Directed by Robert Ben Garant and written by Garant and Thomas Lennon (renowned for his Officer Dangle on TV’s RENO 911, with a penchant for wearing tourniquet-tight shorts), BALLS is a journey deep into the dark heart of underground ping ponging, where Feng (Walken) gathers the best players from around the world to take part in a sudden death (literally) ping pong competition. Is it coincidence that Walken overlords these scenes like the Vietnamese slave-traders in THE DEER HUNTER who forced him to play Russian roulette? Only now, the chopstick is on the other won ton. How the writers make this death match plot instrumental in Feng ruling the world is anyone’s illogical guess.

Lopez is the FBI “Secret Agent Man” who enlists the aid of ping pong prodigy and Def Leppard fan, Randy Daytona (Fogler), a child star now grown lazed and portly on Vegas matinees, to infiltrate Feng’s operation and nab him – for what, I still can’t quite figure.

Excellent performances (especially from Fogler) and a highly stupid script keeps BALLS on its toes: James Hong as the blind mentor; Jason Scott Lee as a fried-furious kung fu antagonist; Diedrich Bader as a fruity courtesan, Thomas Lennon as a wild-eyed German champion who’s wardrobe choices somehow emulate Officer Dangle’s – hip-hugging leotards and shorts so tourniquet-tight we can see his balls of fury.