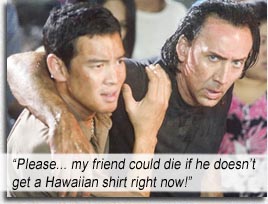 We just have to accept it for what it is. Comparing BANGKOK DANGEROUS 2008 to its original 1999 version is like comparing AMERICAN IDOL karaoke wannabes to real vocalists in hardworking rock bands. The original BANGKOK DANGEROUS (1999) – with its unassailable hook of the deaf mute teenage Bangkok hitman – wipes the floor with 2008’s version.

The strange fact remains that both films were created by the same writers-directors, Oxide and Danny Pang.

Seen with fresh eyes, BANGKOK 2008 is not as shabby as it may seem. The story elements of the original have been juggled around, and it is not as compelling due to Cage’s powerful hitman not having as much of a crutch to overcome as 1999’s deaf teenager, but otherwise it is a well-constructed piece of second hand trashiness.

Cage is hitman Joe, in Bangkok for four last kills, narrating he has lost the taste for the job, intending to walk afterwards. He employs young street hustler Kong (Shahkrit Yamnarm, coolly Westernized) as his aide, who soon becomes his confidante and student. He falls for Fon (Charlie Yeung), a deaf mute Thai girl who works in a pharmacy. Aom (Panward Hemmanee) is his stripper contact in a nightclub frequented by the bad boss, Surat (Nirattisai Kaljaruek). Surat’s last ordered sanction to Joe is a “good man” (as Kong advises), and Joe refuses the hit, opting to go after Surat.

Taken as read that GROSSE POINTE BLANK (1997) is the sine qua non of The Modern Hitman genre for its black humor as much for its brutal subject matter and unique redemptive stance, BANGKOK DANGEROUS goes for the same kind of redemption for its hitman, without the humor, and incorporates an “Eastern” master-student relationship into the mix, which is more poignant than the actual hetero courtship that the Pang Brothers insert sideways into this movie. I’m not buying the stilted courtship between Fon the religious deaf mute and Joe’s middle-aged sociopath hitman.

When Fon takes him to the temple to place fifty separate coins in urns and worship a golden statue, is Joe looking ahead to being “with” this girl and having to endure these superstitions every weekend? Is this killer really going to put up with these inane dalliances after The Getting Of Panty? No. Wasteful non-sequitur montage that could have been better spent making jokes about Nic’s mullet.

BANGKOK is a melding of Hong Kong/Thai cinema with a glossy Hollywood caress; the Pangs throw their camera amongst the Thai culture of floating markets, colorful streets and loud nightclubs where scores of chorus girls dance in unison WITHOUT taking their clothes off (not buying it!). The Pangs now have good funding, and it shows. Look at the elephants.

Joe opens the movie narrating, “Bangkok. It’s corrupt, dirty and dense” as we are choking amidst the bombast of traffic and crowds. By the time he arrives in the temple with Fon, he has found quietude. When he meets Kong hustling tourists, Joe narrates that his aide “has to be disposable,” and by movie’s end, Kong is indispensable as Joe’s friend, ally and – in the alternate ending – his savior.

I don’t usually side with Alternate Endings, as they ruin the payoff with syrup for girlies in focus groups who can’t handle the hero having to die at the end – but in this case, when Joe follows the original script, there is really no reason for him to do so, and I actually prefer the Alternate Ending on the DVD for a better payoff.

As for that mullet, does Gene Simmons know you have his extra wig, Nic?…