Her paps are centers of delight, Her breasts are orbs of heavenly frame.
–Thomas Lodge, Rosalynde.

If you’ve seen CASABLANCA, you don’t want to watch BARB WIRE. It will bring the pain – knowing that resting on that classic movie’s shoulders, are this movie’s breasts.

Naked with a big gun 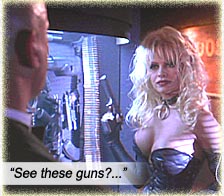 Pamela Anderson-Lee, bountiful BAYWATCH überbim, stars as the titular secret agent, who gets her baby-smooth buttocks involved in lots of running, shooting, explosions, gangsters, magic contact lenses and Nazis. Who cares? Look at those CANS!We’re not here to see her act. We’re here to see her Act.

Dishonesty reigns supreme as BARB WIRE touts as its drawcards the non-stop action and dazzling effects and exciting thrills, and even the fact that Pamela Anderson-Lee is in the lead role, mini-skirting the truth that the only sane reason any human would invest eight dollars and two hours breathing time with this deformed ape-child of a film is to slake their wonder on those Parton-proportioned curios.

Not that these pimping pierogies were much of an attraction in the final theatrical release of this film – all one seems to be doing is rubbernecking down impossibly-skewed necklines and incredibly tantalizing side-breast-arc with no real reward for all one’s efforts. When the movie ends and no one in the audience has nocturnally emissioned, we realize it has all been just One Big Tease; the only satisfaction coming from racing home and succumbing to the trailer park vérité of your sixteenth-generation VHS copy of PAM AND TOMMY LEE: HARDCORE & UNCENSORED (retching optional).

Written by Chris Warner, Ilene Chaiken and Chuck Pfarrer (lifted loosely from the Dark Horse comic heroine of the same name), and directed by music video novice, David Hogan (who should at least be allowed sitting space on the bottom steps of Movie Heaven on effort alone), this film serves as prime fodder as to why this society has such skewed priorities.

Purely on the strength of her exhibitionist penchant and her prominent honkers, Anderson-Lee has had the opportunity to become a well-rounded person in more than one sense of the word: in prep for her violent, protruberant role, Anderson-Lee was given kick-boxing lessons, experience with different weaponry, bike-riding experience, not to mention aesthetic pandering, custom-made clothing, voice coaching, acting lessons, manicures, pedicures (and then came the actual salary over and above the personal enhancement) – simply because she cooperates in the exploitation of her judiciously exposed mammii. For the sake of those two perverse, cavewoman infant feed-bags, hundreds of thousands of dollars were spent on this undeserving tramp with a voice akin to scraping fingernails across a blackboard; every pandering, sycophanting, leather boot-licking courtesy was extended this bubble-headed boob tube with the intelligence quotient of an average chimp – for one eternal glimpse of a circle of wrinkled skin tipping an outsized silicone implant.

Temuera Morrison, of the jaw-dropping New Zealand powerhouse indie film, ONCE WERE WARRIORS finds himself at the opposite end of the talent, intelligence and acting spectrum here. Along with Morrison, dependable B-Men, Udo Kier and Clint Howard attempt to elevate the enterprise with their presence, but I don’t think anyone was taking this as seriously as Ms. Anderson-Lee’s chest.

Political satirist Bill Maher commented on the opening week’s box-office for BARB WIRE being less than hefty, and added, “This proves one thing – America is gay.”