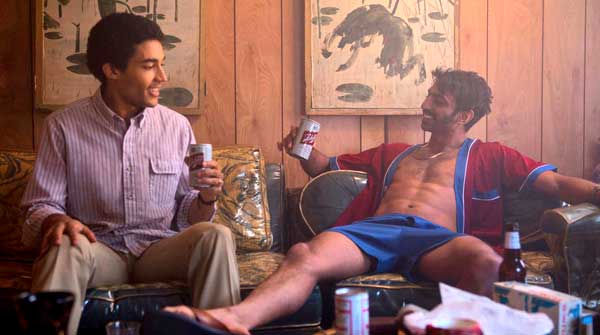 Saleem gives Barry lessons in how not to be so uptight.
Barry has progressed to undoing the top button of his shirt.

BARRY shows us the future 44th president of the United States, Barack Obama, landing in New York as a hopeful college student in search of himself. And some ill manky-g.

This remarkable leader, this orator, this first “black” president, will surely have countless other biographies in store, not least for dragging America out of the ditch she was being ass-raped in due to president Dick Cheney and his bottom bitch W. And I imagine most of those biographies would have the time to only explore a few aspects of Obama’s storied life. So BARRY (much like SOUTHSIDE WITH YOU, which explored Barack and Michelle’s first date-night) features insight into Barack Obama’s formative year at Columbia University in 1981 New York, and what factors might have played into his quest for a direction in life that would lead him to the highest office on Earth.

Australian Devon Terrell is Barack (known as “Barry Obama” until he grew into manhood); an excellent portrayal that is neither mimicry nor satire, but a down-to-Earth representation of what the somber, activist youth might have been like; how he might have interacted with other students, how he might have been affected by the racist tenor of the times, how he might have handled himself in confrontations. The movie does not flinch in showing us an Obama who is not only the intellectual, but is down with drinking, smoking the manky-g, and hitting on women other than his girlfriend. As with all Obama simulacrums, this guy is cool. Coolness on the hoof. At some point in the film, our minds just collapse under the weight of that strut and we just take it for granted ‘that’s Barack Obama’ – the Man, the Dude, the Big Cheese. 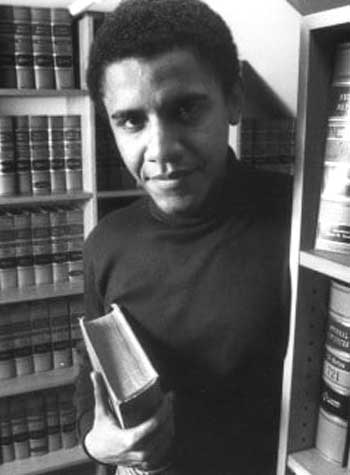 Young Obama. Dreams for the laydayz!

Barry’s roommate is Saleem (Avi Nash, THE WALKING DEAD, a talented mimic, who does a great Obama-sounding-like-a-white-guy, which we realize with a shock basically means he sounds exactly like Obama!), the college boy trope – irresponsible, over-sexed, beer gopher and manky wrangler.

Jason Mitchell (STRAIGHT OUTTA COMPTON) is PJ, one of the underprivileged black students whom Barry meets on the basketball court. (PJ calls Barry Invisible Man, because that’s the first book he sees Barry reading courtside. From then on, it’s all hilarious iterations of that moniker – calling him “Invisible” or just plain “Invis.”) In his quest to find a community to belong to, Barry is curious on how the “other half” lives, so PJ shepherds Barry through some projects, with painful results.

Barry finds himself at odds with students in his civics class, because he talks like a white dude, yet advocates for the black man (a classmate asks, “Why is everything always gotta be about slavery?”), yet Barry doesn’t feel white, nor does he feel black. He confesses to a fellow student (Ellar Coltrane, BOYHOOD) that he feels alien.

Which is why he falls for Ace Frehley. Comes Anya Taylor-Joy (THE WITCH) as fellow student Charlotte, with her striking mannequin face and carved Ace Frehley lips. Not a bad way to spend your youth in New York: chain-smoking, playing ball, studying civics, and tapping Anya Taylor-Joy. But this relationship is doomed from the beginning, because we know Barry ends up in the arms of his law office supervisor, Michelle Robinson. It might have been just a simple breakup with Charlotte, but the movie adds weight to Charlotte’s interaction with Barry by inserting racial tension in Barry that would give him the impetus to annoy John Boehner and Mitch McConnell 30 years from now.

The racial animus might all be in Barry’s head though, because he seems to nitpick that Charlotte is taking him to restaurants in primarily black neighborhoods, he quizzes her on who “Idris” is (a friend’s name she drops offhandedly – but definitely a black name!), he feels discomfort when she integrates so smoothly with the black street vendors… Ultimately, Barry suspects Charlotte only likes him “because he’s black.” Accusing her of a kind of “reverse” racism. (You only LIKE me – not dislike me – because I’m black.) Charlotte’s sadness and pain is palpable as Barry slips away. For seemingly no reason at all.

It doesn’t make Barry look very good. He never stopped to consider that maybe Charlotte just preferred tall, dark and handsome; or maybe she was comfortable because she was strong enough not to be intimidated by pigment? Planting the race flag so firmly at the root of other people’s motivations, means he also planted it at the root of HIS motivations. Again, none of this might be accurate with Charlotte, and she may have been a wonderful young girl in real life that Barry just grew apart from, so the movie might have unfairly burdened this poor young lass with the root cause for why racists lost their shit in 2008. 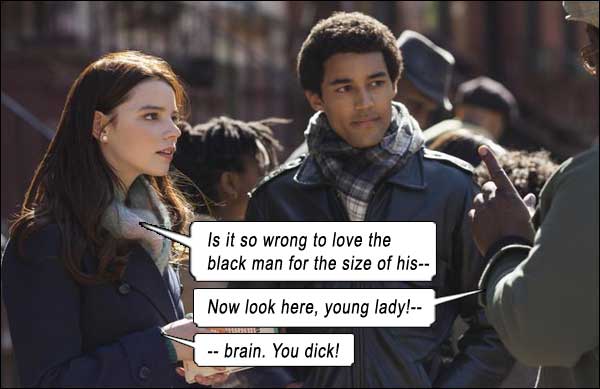 Ashley Judd is Ann Dunham, Barry’s articulate, cool mother, who visits Barry, Saleem and Charlotte. When talk turns to Barry’s dad, Ann brushes it off, “He was a lovely man; we just weren’t suited to each other.” She has forgiven whatever sins the senior Obama might have committed, and moved on with her life. That’s a key element to Barry’s search for himself…

In trying to find that “Jack Kerouac scene” Barry still won’t let go of his longing for a father figure to guide him. He starts writing a letter to his father, who seems almost like a fiction, an ideal in his head, because Barry had only met him once, as he reveals to a few people. In the letter, he makes a resolution to meet with his dad, signing it, “Love, Barack.” It’s probably the only time that name is used in this film. And we can see why Barry uses it – to connect with his dad, using the name they both share, rather than the Westernized version that he has grown accustomed to answering to in white society.

Written by Adam Mansbach, directed by Vikram Gandhi (for both, their first feature film), this Netflix production avoids that annoying cliché of prescient one-liners – characters intimating to our hero that he’ll be great one day through wink-wink dialogue. BARRY just meanders along, like its titular character, seemingly unsure of its direction, until it coalesces when Barry deduces what he doesn’t want in life. To cling to the past.

At a wedding party, Barry meets an elder bi-racial couple, marveling at how peaceful they seem with themselves. He opens up to them about his alienation: that he’s from so many places, yet feels he is from nowhere; that his mother was white, father was black, and he can’t resonate with either color; the fact that he can play ball with the best of the brothers and yet can’t integrate into their street culture. The couple reassures him, telling him all those contradictions prove, “It makes you American.”

One day, Barry gets a phone call from “Aunt Jane in Nairobi.” She simply states, “Your father is dead. He is killed in a car accident.” The world stops turning. A few moments later, in silence, we see Barry open up the letter that he didn’t get the chance to mail to his father.

A brisk morning, Barry steps out to the basketball courts, and finds just one little kid playing. The kid asks him where he’s from, and Barry answers, “I’m from a lot of places. But I … I live here now.” He had found his home.

In a theme similar to SOUTHSIDE WITH YOU, it was only by “letting go” of his father that Obama was able to move forward. BARRY’s moviemakers zero in on Obama’s father being a defining element in his life, even though he was absent for most of it. Obama himself would prove the metaphysical hold of his father by writing a book entitled Dreams From My Father (Times Books, 1995).

Thank you, Barry, for finding your way…

While watching the young Obama, I couldn’t think why the name “Barry Soetoro” kept floating around my head. I looked it up and it was in fact, Obama’s step-father’s surname, Lolo Soetoro (whom his mother Ann married in 1965). But Barry wasn’t using it in the movie, calling himself Obama, as we know him.

And I recalled why Soetero carried such baggage – because during Obama’s presidential run in 2008, and forever afterwards, the Republicans weaponized that name by claiming that Obama applied to Occidental College as a “foreign student” named Barry Soetero in order to gain a scholarship. It was a story as devoid of facts as any Republican conspiracy idiocy, yet it took hold, because – MAGA (Morons Are Governing America) and MAPA (Morons Are Populating America).