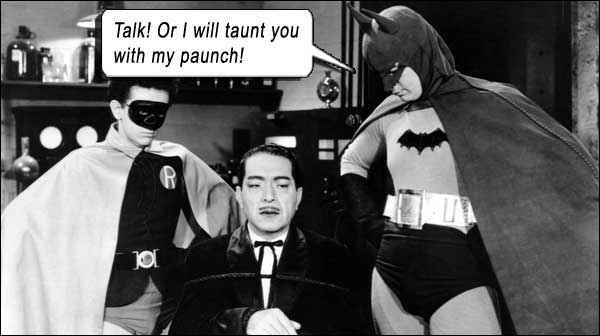 The very first Movie Batman! After Bob Kane created the name of The Batman in 1939 and Bill Finger created all the elements that would become Batman canon (from the costume to the Batmobile), THE BATMAN follows the caped crusader in a 15-part serial released just four years into the character’s comicbook adventures. No wonder Batman didn’t have time to get in shape.

Peering through eyeholes not far enough apart to accommodate his fat head, panties hiked up to his nipples, and with his cloth cape aflutter, the cowled “government agent” Batman lumbers into fistfights with the grace of a doughy bus driver and punches his way to justice, all the while effeminately brushing his cape out of his face, while wearing a utility belt that he never uses, the size of a pizza tray, and aided by a pissboy who seems to love getting punched in the face by men. 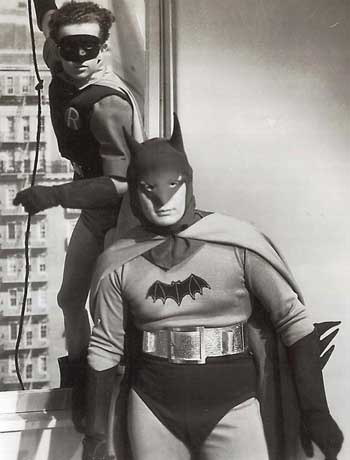 When superheroes put Justice first, and Working Out last.

Lewis Wilson stars as Batman/Bruce Wayne. In this first ever onscreen appearance of the dark knight, there is surprisingly no “origin story” (maybe it was not yet ironed out by Bill Finger, while Bob Kane was hiring lawyers behind Bill’s back to steal all those ideas as his own), but there IS one of those excitable radio-styled narrators, introducing the dread Batman in his hilltop mansion, brooding in his Batcave. Now, in the previous sentence, I used the terms “dark knight,” “dread” and “brooding” – but it is obvious those epithets are a long way from being employed on this fruit in the gray cloth cosplay.

Another fruit enters the scene – the smooth-thighed Boy Wonder— I mean, Bruce Wayne’s jailbait ward and beaten-upon sidekick, Dick Grayson aka Robin (Douglas Croft). While the narrator is pre-ejaculating, extolling the virtues of this government agent who works with the police force (the censors made them tweak Batman’s role to a socially-acceptable one, rather than retain his comicbook ethos of vigilante), Batman and Robin earnestly discuss fighting crime, like they’re acting in a scene to earnestly discuss fighting crime.

Let’s talk context: 1943 – America was in World War II, after Pearl Harbor; Japanese internment camps dotted the American landscape and forever stained the American soul (George Takei, of STAR TREK fame, recounts those camps with great clarity, as a child prisoner with his innocent parents). And this serial reflected those jingoistic sentiments, making the villain Japanese, Dr. Daka. And though there are numerous blatant insults to the Japanese people (Narrator: “Since a wise government rounded up the shifty-eyed Japs…” JESUS CHRIST! They said that on film?!), the filmmakers’ greatest insult to the Japanese would only become apparent decades later, as Daka is played by J. Carrol Naish – a CAUCASIAN ACTOR WITH PULLED-BACK EYES!

Daka’s plot is to kidnap scientists and mind-control them, via a salon hairdryer that shoots those sciency bzzz sparks. Daka calls his slaves “zombies,” but dahling, zombies are people like Jesus and Lazarus – who used to be dead and brought back to life. Your creations are just slaves without free will.

Just so happens, Bruce Wayne’s somnolent squeeze Linda (Shirley Patterson) is missing her uncle, and suspects Daka has enslaved him. Of course, she’s right, otherwise where would the plot go? But being Daka’s slave is not so bad. Each slave sports a Buck Rogers helmet that doesn’t muss their hairdo, matching snappy turtlenecks and a nice pair of slacks.

Wilson plays Bruce Wayne like a lazy carouser, and every time Linda asks for help from her supposed boyfriend Bruce, he tells her to go it alone! WE know it’s so that he can follow her as Batman, but Bruce is constantly complaining he could never wake before noon, never keep dinner dates, stalls her at every turn until we wonder why she would ever continue to date the lethargic, callous, entitled, overweight, rich— oh. Never mind…

And Dick Grayson never leaves the two lovebirds alone – not for a second; like he’s attached at the hip to this dirty older man. And what a big mouth he has. This must be where Burt Ward (Robin from the 1960’s TV series) learned his craft, as Dick delivers his lines like he’s trying to talk over a jackhammer, “You’re liable to carry that masquerade too far!” And Bruce shouts back, “If I let her know I’m the Batman, she might worry!” Geez, fellas, speak a little louder, the people two mansions over can’t hear.

Batman and Robin access the Batcave via an old grandfather clock, squeezing through it slowly and uncomfortably, and hoping that the crime they’re changing for isn’t urgent. Sometimes they just change in the back of their car, like band guys changing in the toilet. It’s just a big, black car, NOT a Batmobile, because the studio couldn’t afford to build one. 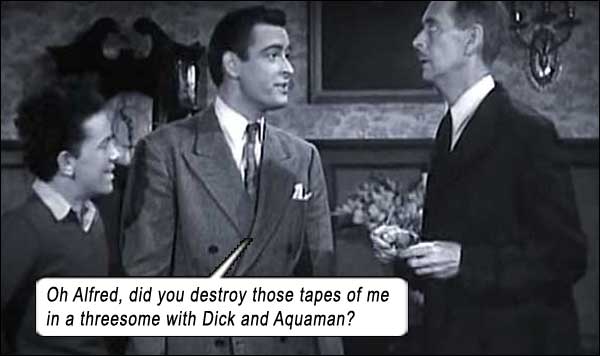 Alfred (William Austin) is quite a card, as British as cricket, gadding about in different disguises, infiltrating crooks’ lairs and right amongst the fracas when Batman and Robin appear to take charge as nellie bottoms. (In the comicbooks, Alfred was portrayed as portly, but soon his image would emulate this wizened liege.)

There is a Captain Arnold instead of Commissioner Gordon, who refers to Batman as his “best agent” (to keep the censors out of their pants). He keeps finding crooks tied up on the street with – get this! – a bat symbol on their foreheads! Decades before Batfleck started branding his victims – here in this first Batman outing is that mark of the beast. There is a Native American (true-blood Billy Wilkerson), known as “Indian Steve” whom the writers give lines like, “Me know Coulton. Me no see Coulton.” Well done, Columbia Pictures, you racist assholes! And I’m sure that’s Jason Robards as a young thug, who must’ve wiped this movie from his imdb page.

One episode features Bruce donning a big-nose disguise to infiltrate Daka’s henchmen, calling himself “Chuck White.” It’s hilarious because now he’s crossing over into Clark Kent glasses-wearing territory; Linda calls on him, and we gain a greater understanding of the level of her mental retardation when even she can’t recognize him. Late in the serial, Daka eventually gets Linda under mind control, and that’s when we KNOW he’s mad – because the first thing he DOESN’T do is make her take her clothes off. 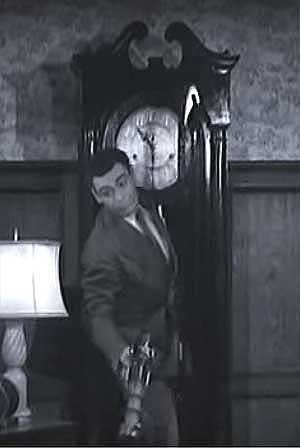 Squeezing through the clock not raising any alarms about the weight, Bruce? None?

In fisticuffs, Batman and Robin are pretty well-matched by the crooks, who regularly get the better of them. And who never fire their guns that they are usually holding. In one scene, a thug holding a gun walks into a room, sees Batman – and hits Batman on the head with his gun hand! Then, instead of just shooting him to make certain, they put Batman in a coffin. So this is where the practice of Having A Gun And Not Using It started!

Suffice to say the fisticuffs, which the serial includes in almost every episode for “action,” becomes tiresome and repetitious if watched in one sitting. We can never hope to capture the intensity of watching this with young eyes, waiting breathlessly for the next weekly installment, in the days when cars drove in front of rear projection screens and every pit you fell into had wall-spikes that closed in on you. Remember when EVERY action movie had wall-spikes that closed in on you?

Directed by veteran B-movie maven Lambert Hillyer, THE BATMAN was taken pretty seriously in its day, yet filmic techniques and cultural norms have moved so far from this period that it is painful to watch the way people fought, the way they acted, the way they spoke, the way everyone was blocked facing the fourth wall while they spoke in a group, even the way people had to put a coin into a public phone and dial!

Released during the war, the filmmakers could get away with all sorts of explicit racism: “In this hour when the Axis criminals are spreading their evil over the world…” “That’s the kind of answer that fits the color of your skin…” The Japanese Cave of Horrors is like a ghost train ride with all the exhibits showing mannequin Japanese soldiers holding white women prisoner, taunting a white man in a cell, etc. Batman himself, when he finally meets Daka in the last chapter exclaims, “Jap devil!”

Looking vaguely like Clive Owen, Lewis Wilson filled the remainder of his career with “uncredited” roles in B-movies and one starring role in a series in 1973. He only has 16 credits listed on imdb. These days, to score a starring role as a superhero means your star is rising, as well as promoting the careers of veteran actors in smaller roles and occasionally spawning spinoff movies for secondary characters.

THE BATMAN serial was so successful that it spawned another serial in 1949, BATMAN AND ROBIN, same Bat-studio, different Bat-actors. 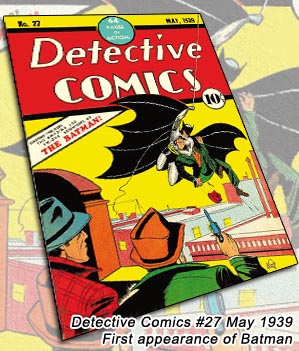 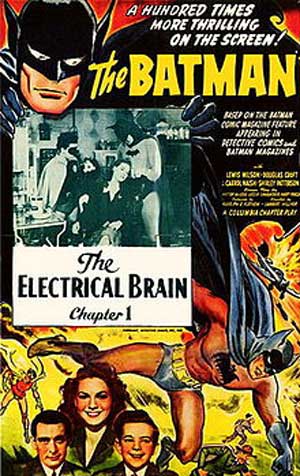