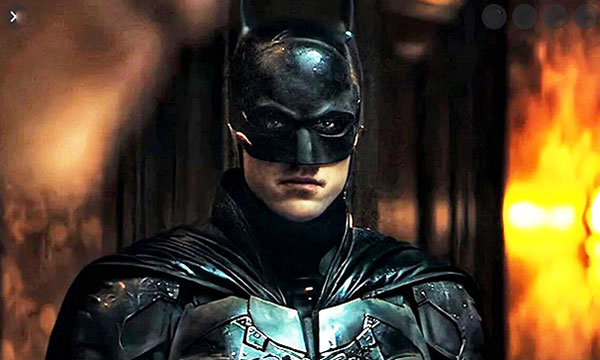 A young Batman, in his second year of fighting crime, feels futility mounting in his quest to rid Gotham of corruption. When he is enlisted to help Lieutenant Jim Gordon against a terrorist known as The Riddler who is killing politicians, he begins to question how high up the corruption goes, and is confronted with his own dead father’s morally ambiguous ties to the very sociopaths he pursues.

THE BATMAN is a nitrous fueled noir detective thriller, brimming with fear and darkness and hubris and heroism, sweeping across gutshock action and granular detective work with equal verve. The Batman not yet a legend, more a vicious rumor – emphasis on vicious; the police tolerating him as an eccentric vigilante, useful to their Lieutenant for his off-the-book skills. Batman keeps a journal titled “Year Two” – a nod to the legendary 1987 Frank Miller origin story Batman: Year One (yet this movie has little to do with Year One and nothing to do with the 1987 Mike Barr/Todd McFarlane comic, Batman: Year Two).

An epic character study and crime drama, with such sweep and nuance, it seems almost a crime to just focus on: THE BATMAN Top 5 Bottom 5.

B4 – THE DUMBO FOLLOWERS: NO MORE LEADERS 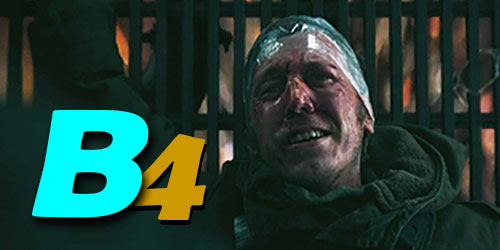 THE BATMAN has captured real world cultism at its worst. So why is this in the Bottom 5? Because it exists in the real world, and this film is coloring too close to the dumbo donald diarrhea of rightwing nutjobs. When the Riddler gun-nut cultist mimics Batman, “I’m Vengeance!” there’s a terrifying message here – at first, it seems like that trope of Hero and Villain being two sides of the same coin, but it’s actually mimicking our reality, of those who are on the wrong side of history wholeheartedly believing they are right, because they follow a demagogue who tells them they are. Criminals calling themselves “lawful,” anti-choicers calling themselves “pro-choice” and xenophobes calling themselves “patriots.” Because their cult leader has made it passe to misrepresent yourself with lies. Only difference between dumbo and Riddler, is that Riddler was doing a noble thing regarded as a crime – ridding the world of lying politicians; whereas dumbo donald IS the crime. 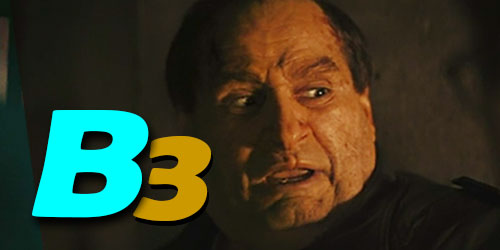 Now, understand this: Colin Farrell puts his heart and soul into the goombah character of Oz, aka The Penguin, under layers of doughy-guy makeup. He’s the muscle for the city’s crime boss, Carmine Falcone (played with effortless slime by John Turturro). It’s also excellent how they’ve made Oz the owner of a nightclub patronized by politicians as slimy as the crime boss – showing the relationship between the underworld and the people supposedly keeping us safe from it – hand-in-glove. But uh, why is Farrell made up to look like that? This is not Gary Oldman made up to look like a famous figure – this is a skinny, good-looking actor made to look doughy. But in a revisionist movie like this, there is no “standard” look for the Penguin – he could have looked like Colin Farrell. So the question becomes: if they wanted someone to look like that, why didn’t they get an actor who looked like that? Are there no more fucken actors?

B2 – ANDY SERKIS: NO ALFRED 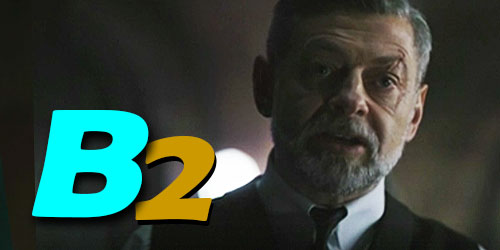 Let’s get this straight: Andy Serkis is the master of mocap – can make you weep for a computer blip of his character; is therefore one of the premier actors of our generation. But he’s no Alfred. Also: Are there no more fucken actors?

B1 – CATWOMAN: NO NEED THE HERO 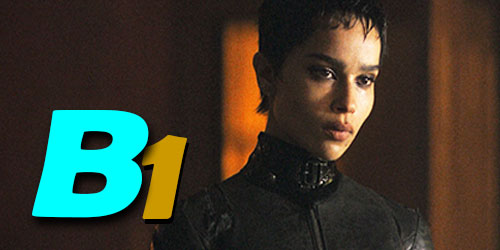 The worst thing about THE BATMAN: I’m frankly sick of seeing Catwoman turned into a hero. They did it with Halle Berry, they did it with Anne Hathaway and now they’re doing it here with Zoe Kravitz as Selina Kyle, a cat burglar who is never called Catwoman. She is given a suitably tragic backstory as to why she’s committing robberies, but how is her avocation any different to the street thug who robs a liquor store, also with a suitably tragic backstory? Matter of fact, the street thug would have to rob 1000 liquor stores and old woman’s purses to make what Selina makes on one haul. So who’s the bigger criminal? Oh, that’s right. She’s hot.

Reminds me of those female schoolteachers who statutorily rape underage boys and are given a pass. The feminine double standard is alive and well in these times of Woman Empowerment, gender fluidity and #MeToo. Yet women will never complain about the culture giving a female criminal a pass; will never correct you if you regard a criminal woman as too cute to incarcerate; will turn a blind eye when Hollywood coddles a female felon into a hero; will never whine “toxic femininity” when SHE kicks the asses of people who are trying to stop her stealing from them.

And the lore of Batman being attracted to Catwoman works best only when Catwoman is a criminal. That’s the whole point of why that romance was engineered in the first place. Batman has to sift his way through his emotions – is he drawn to her musk because she’s a woman or because she’s a criminal? It’s no big thang if Batman is attracted to another hero vigilante – who cares?! – the dynamic only becomes dangerous and interesting if it’s a forbidden romance. Instead, we’re left with this bland hero-on-hero cosplay.

Jeffrey Wright is Gordon, Batman’s ally on the force – another remarkable, controlled performance from one of the greatest character actors; Paul Dano brings a new look to an old nutter as The Riddler, in a bondage headmask and goggles. There’s a scene heavily evocative of John Doe from SEVEN, where Gordon narrates Riddler’s diaries, scrawled in tiny deliberate hand.

And now… the Top 5 things about THE BATMAN… 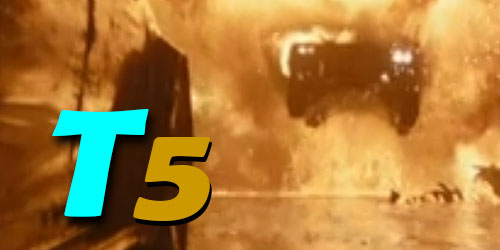 Not yet the angular batular rampager it would come to be, the Batmobile here is just a musclecar – tech lite, yet a sleek weaponized projectile. It turns one of the dumbest tropes in car chases into the most inspiring explosive moment the Batmobile has ever had in cinema. You know the gag: either a fleeing car or a chasing car will drive up one of those car-transport semi-trailers that conveniently has its ramp flush to the ground and is conveniently empty of cars, to leap traffic and get in front of the chase. Corny. Stupid. Unrealistic—and the Batmobile thunders up the ramp giving chase to Penguin’s car and, amidst explosions, comes flying through fire on the other side, to CRASH into the fleeing Penguin… with a view from inside Pengiun’s rolling car, coming to a stop upside down… as we see the halted Batmobile in the distance, from Penguin’s perspective – UPSIDE DOWN, silhouetted by flames – as the Batman exits, choral slow motion, menacing score by Michael Giacchino, as he walks toward us, black figure in rain and cape and fire and fear. If Vengeance had a car, it could only be this. 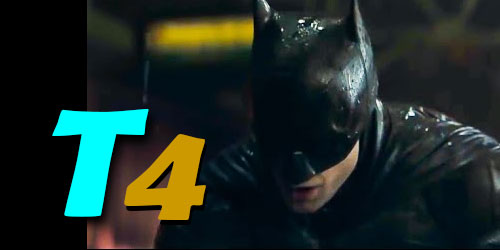 Fear is a tool. A gang of thugs pauses in their attack on a citizen, as they hear approaching boots, like the impact tremors of a tyrannosaur, with all the terror associated with that flesh-eater. The first entrance of the Batman is from a pitch-black alley – I have not seen a movie weighted with this much dark lighting since THE GODFATHER – and he steps to the first thug and with lightning strokes BEATS him down before answering the age-old question, “The hell are YOU s’posed ta be?”

I think we ALL lost our shit when we saw that trailer. 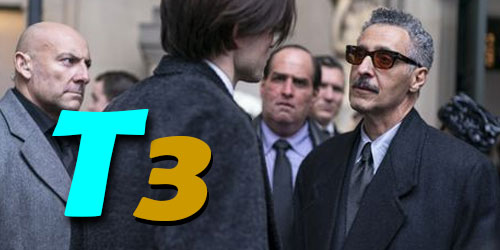 I think Kevin Smith said “We all know the story of Batman’s parents better than we know our own.” But now there’s a wrinkle in our memory of Thomas Wayne… In the grand tradition of Nolan re-writing the MAN OF STEEL’s purpose on Earth with a new terraforming spin, writer Peter Craig and writer-director Matt Reeves have re-written Thomas Wayne’s legacy; they’ve dug into the calcified goody-two-shoes image and burdened this POLITICIAN – because that’s what a prince of the city truly is – with a morally ambiguous rise to power. Incurring the wrath of many, thus making his murder not such an arbitrary event, as portrayed all these decades. I mean, this was the most powerful man in Gotham – he had no enemies?! 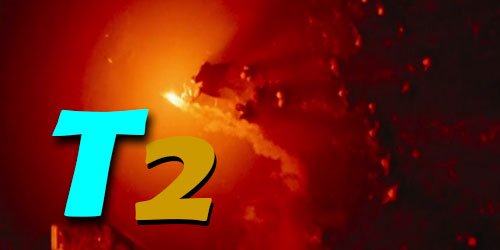 Upon realizing the dumbo Riddler cultists reappropriated his slogan – “I’m Vengeance” – Batman is driven to go further than simple punchaboo: “Vengeance won’t change the past – I have to become more…”  From vengeance… to salvation, as he realizes that though he was powerless to save Gotham from Riddler’s explosives – like a Superman or a Flash – he could still be an agent of good, and we see his role subtly change when the flood victims follow his red flare through the waters. A light in the darkness. It is messianic. It is the other side of hero-dom: not only enacting vengeance, but caring for those for whom the vengeance is enacted. He puts a woman on a stretcher – and she doesn’t want to let go of his arm. From an icon of terror, to a trusted savior; like a Superman, she just wanted this god of hope near.

Some viewers complain about this third act as pointless filler; these would be the same people who don’t understand why Rooster Cogburn makes that last deliverance ride in TRUE GRIT, after the baddie is killed – because it shows the true measure of the hero’s worth, not just killing the bad, but saving the innocent. And Giacchino’s score will make you weep. 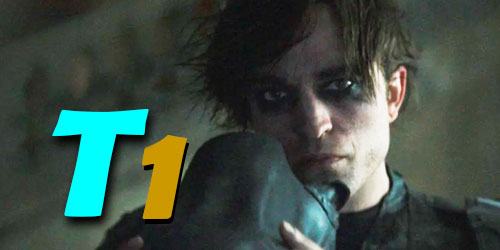 Ladies and Gentlemen: Robert Pattinson… The Batman. After all the speculation and whining, coming to us from TWILIGHT (blech!) and THE LIGHTHOUSE (whoa!) and TENET (uh, wha–?), Pattinson slays this role, pulling one of the most stolid, violent, and tortured performances ever for both Bruce Wayne and Batman. After being accused of being physically unfit for the role, to buffing up and doing many of his own stunts, Pattinson morphs into that state where we feel that no other actor has done justice to this world-scrutinized role as much as him at this cinematic moment.

And the filmmakers have done him proud in accoutrement. His cowl is cutaway with more face-space than previous Batmans, almost like a leer; his eyes seem to glow in the dark (there is much focus on Batman’s eyes here, because we discover he wears contact lens recording devices that allow him to review the night’s travails). And when he removes the cowl, that “black mascara” that we see behind every hero’s hood is smudged (like a modern Joker! Also keeping that connection to Kristen Stewart in TWILIGHT, who wore enough mascara to embarrass a prostitute). When it comes to masks, Marvel have totally lost the plot with their helmets and masks that magic on and off people’s heads, but here, DC gets it right, with the Batman’s street-cred, real-life cowl! To add to the real-life utility, his chest symbol is a knife-edged tool!

His combat style is efficient and vicious; bulletproof armor, arrows on his gauntlets, tasers in his gloves! A cape with a collar! As he wades into gunfire, muzzle flashes lighting up his face in the black, like jagged freeze frames, we ask ourselves: How could we doubt? How could we doubt?!

The Batman’s growing legend is played perfectly in this movie. When the Bat-signal scars across the rainclouds, some run, some scoff, some cower, but all wonder: Is the new apparition on the streets of Gotham real? Or a mythic harbinger of doom? Robert Pattinson done good – from a fruity vampire bat to one of the Top Three Batmen of all time. With a bullet– uh, batarang. 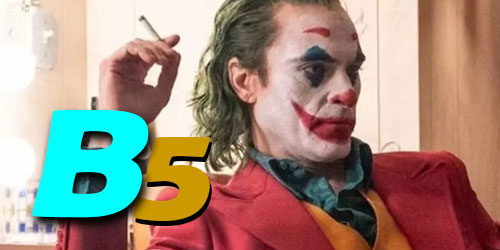 B5 – Maybe some of you noticed that I didn’t have a B5. Here it is: In the final frames, Riddler in his cell speaks to another Arkham inmate, a cackling character, a real joker… He’s played by Barry Keoghan – but that ain’t right, Movie Maniacs! I think it’s time for THIS Batman to meet… THIS Joker!

Y’know, I could be wrong… but you know I’m right!