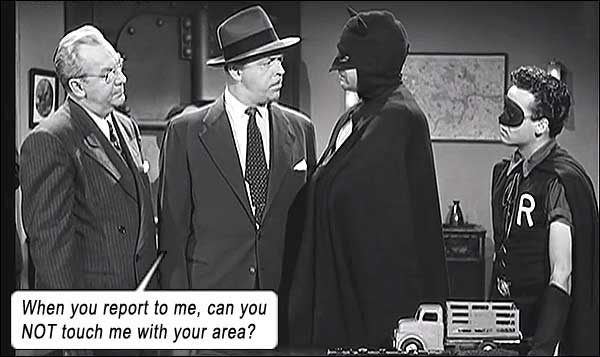 Batman Returns! For the first time. Six years after Columbia Pictures’ success with THE BATMAN (1943), they release a sequel, another serial of 15 chapters called BATMAN AND ROBIN. And all cloth cosplay breaks loose.

Robert Lowery plays Batman/Bruce Wayne (looking like Victor Mature), and Johnny Duncan plays Robin/Dick Grayson (and we can’t quite figure whether he has a speech impediment or he’s just a bad actor).

Columbia Pictures was buoyed by the fact their 1948 SUPERMAN serial (starring Kirk Alyn) was a success, so didn’t hesitate investing in this superhero thriller, that finds Batman against a more fearsome adversary than the Caucasian-pretending-to-be-Asian in his last adventure. The Wizard is the arch-villain tweaking Batman’s cosplay nipples here, an electronics whiz bedecked in black clothes, black cape and a black, full-face hood (replete with eyeholes as misplaced as the ones on Batman’s cowl); he creates a device that can control all transport, that runs off diamonds that his henchmen in hats and suits must continually steal. And which Batman and Robin must continually punch. Because punching solves everything.

The Wizard’s head crook is Nolan, who looks so much like Clark Gable he frankly doesn’t give a damn.

In our youth, these henchmen were the guys whom we colloquially referred to as “crooks.” They don’t make crooks like they used to: all suited-up like groomsmen at a wedding, hats rakishly tilted like they were in the Rat Pack. And always holding a gun with their elbows bent in an L-shape, talking in clipped syllables to the person they’re pointing the gun at (“You, get-over-there!” “You, get-the-money!”)… In our youth, it got so that any guy in movies with a hat and suit that called his boss “Boss” was a “crook.”

Lowery plays Bruce Wayne the same as his predecessor – a lazy carouser, while Duncan is just happy to get syllables out of Dick’s mouth without tripping over them. (Really, was this guy retarded?) Alfred, the Wayne’s faithful manservant, is played by Eric Wilton with a more dignified air than 1943’s comic relief butler. Added to the cast is reporter Vicki Vale (Jane Adams), whom we must presume is also slightly retarded, because she can’t recognize that Dick Grayson’s curly hair is exactly the same as Robin’s, due to that obscuring eye-mask. If only that darn eye-mask didn’t block so much of nothing. A suitably doughy Commissioner Gordon (Lyle Talbot) is now head of the police force, and seems to be the only cop who ever does anything around there. We must presume that the lack of police around the station drove him to invent – the bat-signal, a tiny light that he shines out the window that can be seen as a magnificent bat-specter in the sky from miles away, even in daytime. We constantly wonder why he doesn’t try to solve these crimes with his police force first and turn to Batman as a last resort. He even gives fingerprints to Batman to identify! 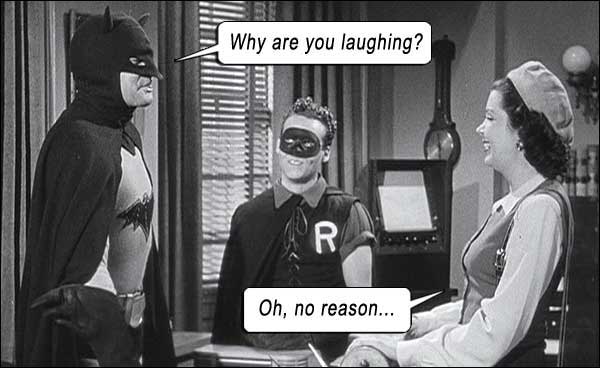 As the familiar elements of the Batman’s world fall into place, Batman’s outfit has also been modified since his first filmic outing. His cape and cowl are blacker, his panties are slimmer, and his ears, for some inexplicable reason, point outwards, rather than straight up, in that classic Jim Aparo comics-art fashion we know and love on all our Batmen. His chest symbol is larger and his utility belt is smaller (although he does pull out massive gas containers and oxyacetylene torches whenever he needs them – like a cartoon). Robin’s costume and cape are altogether darker (which is a good tactical move – I’ve always questioned the utility of a stealthy night avenger wearing a SCREAMING YELLOW CAPE. “We shall hunt under cover of darkne–” It’s YELLOW! “We will be hidden by the night–” It’s YELLOW!). 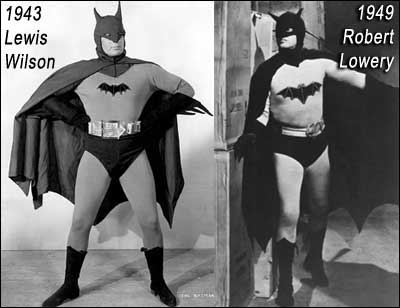 Yet the eyeholes in Batman’s nose-pointed cowl are still in a weird place, forcing him to add a new tactical move to his combat arsenal – mid-fight he adjusts his cowl, to be able to see out of those stupid bat-eye-holes. Crooks use this opportunity to punch him. Very krav-magAAAH.

Though Batman comics have a Batmobile, lack of budget means no Batmobile on set, and the caped crusaders must make-do with just a big tan convertible, sometimes changing in the back of it, like bandguys forced to use the toilet as their green room. Vicki Vale even asks Batman, “Does Bruce Wayne know you’re driving around in his car?” Whaaat?! Yes, Batman and Robin are so hubristic about their secret identities that they brazenly don’t even have more than one car; never mind a “Batmobile” – just another car to disguise your identities! Matter of fact, there is no Wayne Manor, and I’m not even sure if Bruce Wayne is a millionaire here; his house looks like it’s on Mapleton Drive next door to Jerry Mathers as The Beaver.

And the dynamic duo actually do some “science” in their crime lab known as – the Batcave! They regenerate a negative film that was burned, to identify the crooks. They also follow some radioactive money with a “sensor.” (And when that radioactive cash falls on some straw, it catches alight. I guess the filmmakers don’t really grasp what “radioactive” means.) They use communication devices: Robin follows a getaway car, sees crooks enter a secret hideaway, and radios Batman on a com way too large to fit in his tights, “I’ve discovered the Wizard’s hideaway. It’s on a cliff near the ocean.” Being driven by the police, Batman replies, “We’re on our way!” Firstly – driven by the police?! Of course – NO SECOND CAR! Secondly – no further directions; “on a cliff near the ocean” is enough to have everyone meet in the same place and punch crooks. Kids will enjoy the stupid taste of Batman Hideaway Directions Cereal. 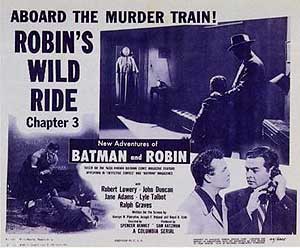 Beating the Crooks! Chasing the Villain! Adjusting the Cowl!

It really is a kids’ movie. Do they really expect adults to accept the ridiculous plotlines? One whole episode is driven by Batman replacing a packet of diamonds in a sleeping crook’s pocket. This crook sleeps not with the diamonds in his inner coat pocket, but with this most precious cargo poking out of his side jacket pocket like a newspaper, to make it easy for Batman to reach out and replace them.

Batman and Robin are trapped in a room with poison gas pumping in. They almost die of inhaling the fumes before Batman gives Robin a gasmask, and then pulls out a blowtorch bigger than his briefs and cuts the door down. Why didn’t you pull these things out RIGHT AWAY instead of suffocating for the first five minutes?!

In another episode, Bruce dons a disguise to infiltrate the crooks’ club. It’s a bandage on half his head. He doesn’t look one bit like the guy he’s trying to imitate. He looks like Bruce Wayne with a bandage on half his head. It’s as laughable as the “Chuck White” character from the 1943 serial. Bruce asks Dick, “How do I look?” Dick replies, “Like his twin brother!” Wait, really? You know we have eyes, right?

There is an almost-exciting car chase, Batman pursuing crooks in a van, and the van plays chicken with Batman in an unbroken take, where the stunt actually achieves a high level of danger. The crooks push bales of hay out the back to hinder Batman’s pursuit, then they turn a corner and stop, and we think they are going to set a trap for Batman… But no. They all get out to have a smoke! And Batman stops just short of the corner and tells Robin, “They’ve stopped around the corner.” How does he know this?! After Batman fights the gang and is thrown off a cliff, the gang leader says, “We’d better get out of here!” Really? WHY DID YOU STOP IN THE FIRST PLACE?!

And tying it all together there is… the punching. Every episode of this 15-part serial has to have its third-grade schoolyard fight choreography, to keep third-grade schoolyard boys happy. If the serial is watched in its entirety in one sitting, the fighting becomes tiresome immediately, as there are no interesting or exciting moves or even creative editing, just guys amateurishly hitting each other like schoolboys who think this is how adults fight, with that omnipresent dsh! dsh! dsh! sound, no matter if the punches land on the face, gut or back of the head. For two guys who are trying to stop crime, you’d think Batman and Robin would engage in punching as little as possible, and have more efficient methods of stopping crooks. How about a gas pellet? How about bolos? How about stun-guns? Do they have to always RUN toward the group of henchmen and wade into the punching? And keep in mind that all these henchies are armed with guns that they never shoot. 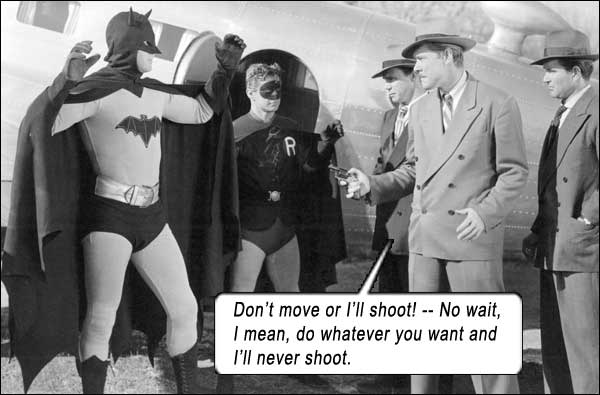 When we compare these first superhero films with modern super movies, even the stupidest ones (cough— FANTASTIC FOUR, GREEN LANTERN, CAPTAIN AMERICA: THE FIRST AVENGER) seem like masterpieces of re-imagining beside them.

In the final chapter, the Wizard creates a device that makes him invisible, so we get all the old-fashioned “invisible man” gimmicks – doors opening by themselves, objects floating through the air supposedly being carried by the invisible guy, but looking like they’re on strings, people pretending that someone is hitting them, telephones dialing themselves… for which I’m sure 1940’s kids were utterly amazed.

The mystery resolves like a Scooby Doo cartoon, with the unmasking of the Wizard and the explanations of his methods and crimes. That still leaves many questions unanswered:

Why is that newscaster broadcasting every single plot point, so that the heroes and the crooks all know where to go punch each other? Why don’t the crooks ever shoot? Why does Commissioner Gordon speak to Bruce Wayne and Dick Grayson as if he’s just continuing a conversation he just had with Batman and Robin? Why is that guy in the wheelchair suddenly walking? How does Batman fit so much big stuff into his utility belt? Why does Robin look older than Batman?

After this childish attempt at bringing the dark knight to the screen, surprisingly, it would only get more childish, as the Batman would soon – go West!