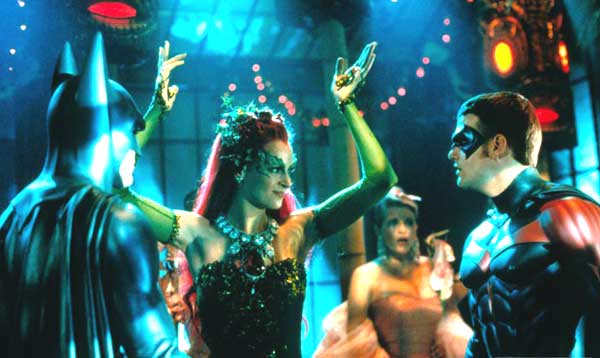 The Battiest of them all.

Why does George Clooney waggle his head like that when he talks?…

And how did he infiltrate Wayne Manor’s impenetrable security system – Alfred Pennyworth (Michael Gough) – to become the next Batman? I suppose Alfred – in seeing no less than three Batmen pass through his hallowed halls (Keaton, Kilmer, Clooney), simply puts it down to his spiraling Alzheimer’s…

I find it strangely ironic that the major complaint with this fourth modern Batman incarnation, BATMAN AND ROBIN, is that it resembles a comic book – let’s all step back from our sophisticated bad selves for a moment, folks… Batman IS a comic book. It is doubly ironic that modern comic books exhibit a more cogent view of “reality” – since Batman’s inception in 1939 – than that which director Joel Schumacher opted to portray in this sophomoric film, which harks back to the inglorious camp of the 1960’s TV series, much-maligned by aficionados of the “brooding Batman” persona. 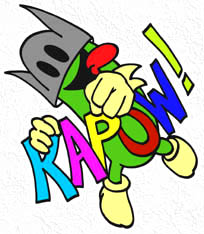 And in camping it up, Schumacher seemed oblivious on where to draw the line: primary colors shriek in anguish and gobos coruscate like an LSD afternoon delight (I assume that the DISCO BALL in the Batmobile’s engine means Batman has “Knight” Fever-?); humanly impossible feats of acrobatism abound, contravening every physics principle mankind has worked so hard to identify; everyone speaks simply and directly (“Freeze – you’re mad!” “She’s definitely evil!” “I was the one who kicked Ivy’s butt!” – gems, one and all) with lowbrow puns constituting over 80 percent of the egregious dialogue; henchmen and policemen as widespread as buffalo on an Oregon plain – and just as dispensably bovine; all that’s missing are the Kapow’s and Blammo’s…

Stupidity runs rampant in this movie, so outlining the plot may seem like an exercise wasted: Arnold Schwarzenegger, as Mr. Freeze (who becomes “bad” after falling into a vat of cryogenic solution – er, okay), bewilderingly reaches the conclusion he will find a cure for his frozen wife by flash-freezing Gotham City. Ah, the Republican mind at work: like George W. Bush’s plan of furthering education for American children by blowing up Iraqi children. We all know that Arnold can’t act – but who knew he couldn’t even OVER-act?

Meanwhile, Uma Thurman (playing Poison Ivy like Mae West on the brink of constant orgasm), who seeks to over-run the planet with her horticulture, is a lesson in blandness. That doesn’t quell the writers relentlessly plying these two monotonal villains with exquisitely-painful puns, eliciting uncomfortable throat-clearing in the stead of guffaws.

Place them beside the traffic-stopping vapidness of Chris O’Donnell (Robin) and the plump insipidness of Alicia Silverstone (Alfred’s niece, Barbara aka Batgirl), whose lips look like two oysters doing battle and whose costumed bosom is as unnaturally rounded as Janet Leigh’s was unnaturally pointed, and we have a cast as formidable as any ensemble from a POLICE ACADEMY stinkbomb.

Resembling a comic book is not a crime; insulting our intelligence is what earned Schumacher’s BATMAN the prize in banality. Of the thousands of gaffes that litter the movie, one of the most galling is when Batman shows Freeze incriminating footage of Ivy admitting she was Mrs. Freeze’s would-be killer. During that admission, Ivy had dispatched Robin with a gentle push into a two-foot-deep wading pool, Batman was tangled in vines near the ceiling and Ivy was busy kicking Batgirl’s portly butt. Yet the Bat-Palm-Pilot simply replays footage from this movie (!), not even trying to re-create any “hidden-camera” authenticity.

After spending the greater half of the second act feebly arguing over Poison Ivy’s affections (in a vain attempt at dispelling their image as the original Ambiguously Gay Duo), Batman and Robin must then field the inclusion of Batgirl into their troupe, who apparently assimilated the complete Bat-Crimefighter Protocol in one evening (from Alfred’s Bat-Secrets DVD), when she turns up to get her butt kicked by Ivy.

Hilarity ensues, as she larks at Batman, “Bruce, it’s me – Barbara!” – oh, sorry, that meager strip of mask which covers virtually zero percentage of your face had me irretrievably flummoxed!

To further the idiocy – Batman, who for most of the movie has been badgering Robin (the professional acrobat) about being unprepared for battle, nonchalantly allows the out-of-shape college student Batgirl (who has spent just one evening cramming the Batalog into her blond brain) to participate in life-threatening battle with super-villains. Now that’s a responsible guardian! (A far cry from Alfred’s summation of Barbara, who asked, upon her arrival at Wayne Manor, “How in the world did you manage to get here all the way from England?” Seeing as she is in her late teens, did he pose that question because she is retarded, or because they don’t have planes in England?)

By movie’s climax (which sees Gotham Telescope crashing to the ground and exploding, obviously due to the vast poundage of explosive material that telescopes are made out of), the costuming on the three heroes is so garishly superfluous, so clinically hedonistic, so tastefully atrocious, that it goes way past eye-candy and directly to eye-myocardial-infarction, Clooney’s costume neck-bracing him like a stockaded rodeo bull, silver highlights transversely swirling over pecs and quadriceps and Achilles-tendon – one imagines he must feel intoxicatingly liberated when he is free of that constricting cowl, as Bruce Wayne; to dance and sing and compose odes to peripheral vision…

…I guess that’s why he waggles his head like that.