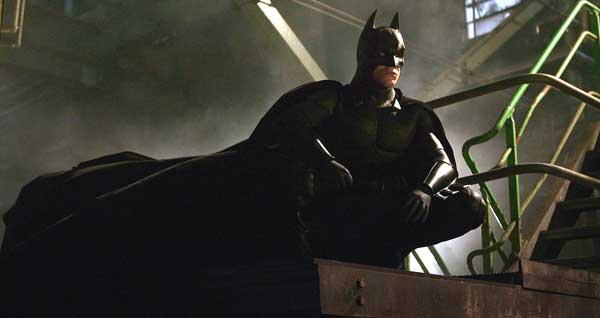 Droves of bats against an ocher sunset, teasing out the infamous Bat Logo on the sky with their swarming bodies; the first five seconds of BATMAN BEGINS are scintillating.

Then it just keeps getting better.

If there is bedrock truth in the axiom, “If it ain’t broke, don’t fix it,” then surely the inverse is also true: “If it is broke – FIX it.” And if there was one modern legend that needed fixin’, it was the laughable vamp and clamorous camp of Gotham’s fruity caped crusader, the Bat Man. As Michael Caine might opine, “About bloody time!” 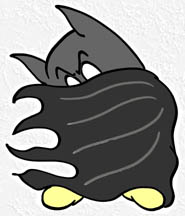 A secret cabal, old as civilization, called Ra’s Al Ghul, seeks to wipe out Gotham for its iniquities, as it destroyed London, as it destroyed Sodom. And Batman – trained by that very cabal as a young Bruce Wayne to become one of them – must stop them with bat brand flying.

Director Christopher Nolan is in no hurry to throw us blockbuster money shots, as this leisurely-paced (yet crammed with content) origin tale takes us on a blighted journey, physically and mentally, exploring the whys and wherefores of the psychosis/rationale behind one man’s obsession for curbing injustice. Along the way, we are made privy to a multitude of answers to questions we’ve never even thought to ask, such as: how did Alfred get in on the gag?; origin of the Batcave?; cowl contractors?; why reptilian spikes on forearms?; why even wear a cape, a non-utilitarian artifice at best? – and, most importantly, “why a bat?”

In the Keaton BATMAN (till now, the best of the modern BATMAN series), we met our protagonist already entrenched in his dualism; how he got there was the subject of minimal flashbacks and a priori knowledge on the viewer’s part. This movie, though subtitled “Batman 5,” should realistically be the first in the series.

Which raises a pertinent issue: where do they go from here? Through years of braindead example, we are well aware of how gutless, greedy, shameless and rootless studio heads are, and how they would readily sacrifice quality for the sake of potentially increasing sales of their stocks. The fact that creating a quality product might even elevate their stock values never occurs to them. As such, BEGINS is unfortunately not the beginning of a trend, but a departure from Method, as painfully illustrated by the shallow mentality (and hence, wide demographic appeal) of THE FANTASTIC FOUR, this season’s other Superhero Movie. 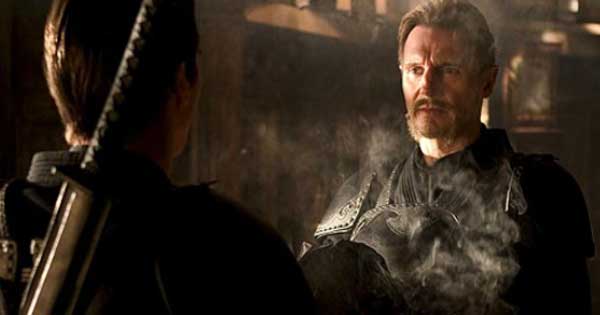 Liam Neeson draws deeply on The Mists of Monk-Fart.

BATMAN BEGINS is so rooted in a modern-day reality, and filmed so grittily and starkly, that when the Batman (Christian Bale) eventually does appear, he is almost incongruous; an anachronism in this modern crime drama. In keeping with his alter ego, Bruce Wayne’s, vision: invoking fear with a figure so haunting and misplaced from reality that it resembles nightmare.

Not for the Attention-Deficit-Disorderlies, our Chiropteran Hero appears well after the movie’s first hour and then, only in small bouts of screen time – “the bat man” is portrayed as an enigma. See too much of the Enigma, it loses its mystery and terror.

Amazing how the film-makers (co-writers Nolan and David S. Goyer) took so many liberties with this revered character and yet re-rendered him as even more appealing. The costume is the blackest, sleekest and most functional of all Batman’s incarnations. (Unfortunately, after initial glimpses, we never see it wholly clearly again.) The logo has been honed to a more serrated appearance – subsequently, all the bat-gadgets must necessarily resonate this upgrade. The Batcave is an actual cave, depicted before computerization, dramatic lighting and rising turntable dais for Batmobile… Nolan even went so far as to renounce the canon, “Never mess with a man’s vehicles,” obliterating the popular conceptual design of Batman’s automobile – gone are the associative batwings and sleek undulating curves – the “tumbler,” as it is called here, is the jagged offspring of a Hummer and an F-14 Tomcat. 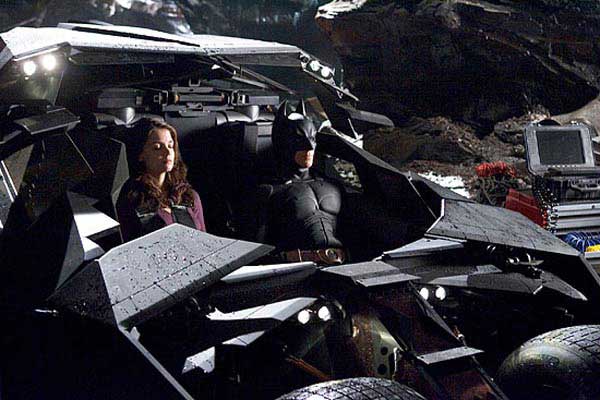 “I think I cut myself on your car.”

And the best upgrade of all: Batman is no pussy-rescuer.

Allow me to elaborate: Superheroes are often shown saving kittens in trees and preventing minor purse-snatchings, to give us a sense that they really do Care on a level which should probably be “beneath” them. Well, it is beneath them. In a reality where super-beings commission themselves to combat injustice, they would be veritable gods (albeit vigilante gods), and you don’t bother gods with trivialities like the coffee machine being broken – they are there to solve the Big Problems that are above the Common Folks’ capabilities.

Ironically, a “super” being concerning himself with every grocery-store heist and fanny-pack snatch would be considered a menace through his vigilantism – by every cop flunkie who would rather be scoring the collar for themselves.

Conversely, super-beings who involve themselves at higher levels of crime will also risk run-ins with the authorities – but at higher levels of bureaucracy. For the authorities in every major city don’t really want to stamp out crime, or drugs, or terrorism – without the power they wield as supposed protectors from these “evils” (not to mention the direct and indirect kickbacks and perks), they become impotent.

An excellent writing choice in allowing this “super” being to resolve a fiendishly “super” plot – one which could not simply be curtailed with some well-placed Pow’s and Blammo’s.

Although, to be honest, in making Batman more than a pussy-rescuer, it would then be unnecessary for this high-crime bane to stand atop a rooftop gazing out over the city. All he is achieving is airing out his cape, as he is way too busy to go galavanting after every stereo-stealer and horse-dealer he must be witnessing from that vantage.

The cast itself packs a Blammo, and have the time of their lives playing dress-up: Bale in his Batsuit; Michael Caine, a spunkier Alfred; Gary Oldman playing cop Gordon pre-commissioner; Liam Neeson, exotic Hard Guy; Cillian Murphy in his funky burlap hood as the Scarecrow; Tom Wilkinson doing Pacino; Morgan Freeman playing – er, Morgan Freeman. (It must be noted: Katie Holmes‘ baby-bottom cheeks add nothing to her role as “hard-nosed attorney” and Bruce’s love interest. Even at her advanced age, Kim Basinger would have still made a more convincing and alluring mate for Bruce Wayne. It’s all the rage now anyway – older woman, younger batman.)

Give Burton and Keaton their due, but forgo the rest of the series, especially Clooney’s nipples and Robin’s single facial expression – it is HERE… that Batman begins…

Batman versus Batman
Keaton or Bale? A blow by blow comparison.