From Dark Knight to Boogie Knight. 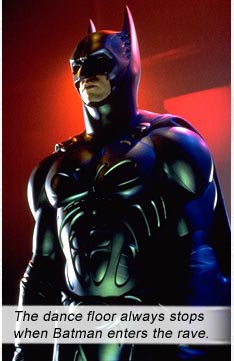 After Tim Burton gave us the brooding BATMAN (1989) and the dark-yet-kinda-silly BATMAN RETURNS, he relinquished the director’s chair to Joel Schumacher, who promptly made Batman fruitier than Adam West.

In BATMAN FOREVER, the third installment of the modern Batman legacy, Val Kilmer is the fruit bat whom we cannot be sure is hero – or victim (of director Joel Schumacher).

The tone has shifted to the cartoonish bent of the 1966 BATMAN TV series, yet strangely, Kilmer seems to be taking it all seriously, doing a magnificent brooding Batman and tormented Bruce Wayne. In one scene he laments to a stupefied Robin on why seeking revenge is an empty aspiration, and that actually getting it simply hollows out the soul even more. Then Robin opens his mouth and mewls and all we can think about is Burt Ward’s moose-knuckle undies.

No matter that Kilmer brings the baritone darkness, everything and everyone around him is out to make this the stupidest Batman experience yet, starting with the script (by Akiva Goldsman, Janet Scott Batchler and Lee Batchler) – they open by putting these words in Batman’s mouth, “I’ll get drive-thru”; later giving him a silly punchline on why girls hound him: “It’s the car. Chicks dig the car.” How do we roll our eyes in this cowl big enough for everyone to see? Sets dressed to fry our eyeballs with their colors, most of them looking like plastic leftovers from LOST IN SPACE; overacting on stir fry (Tommy Lee Jones and Nicole Kidman); and some guy who somehow passed the audition without any acting ability at all (Chris O’Donnell as Robin).

Robin’s origin as a circus acrobat is mildly interesting (and accounts for why Burt Ward wore such ass-cracking knickers). Tommy Lee Jones is Two Face, a villain with half his face fried off, and Kidman is Chase Meridian, a psychologist who could use a good psychologist for the way she openly pussy-drips after Batman for a taste of his rubbery leathür.

Besides Kilmer, one other beacon shines in this smarmy comicbook discotheque: Jim Carrey as The Riddler. Amidst the screaming colors and rainbow stupidity, Carrey’s überacting almost steals the show as the greatest Batman Villain ever captured onscreen, at one point asking: “Was that over the top? I can never tell?” You and us both, Ace!

Honorable mention to composer Elliot Goldenthal, who crafts probably the greatest Batman score ever committed to these modern superhero movies. There is a scene where Robin saves Batman’s life and the soundtrack swell is absolutely tear-welling and chest-bursting. It reminds us of the final epic music in ALIEN 3 (Goldenthal responsible for that score also!). At various points, that soundtrack will grab us and shake us out of our glossy-eyed stupor, making the comicbook visuals seem grander than they are. It is the closest any composer has come to attaching a memorable theme to a superhero movie (since John Williams did it in 1978’s SUPERMAN), if it weren’t for the modern penchant of attaching pop songs to tentpole movies, in this case, Seal’s Kiss From A Rose.

Two Face and The Riddler team up to kill Batman. After lots of colors and explosions and batarangs and epic music and Nicole Kidman flouncing around with her red lips on panty pout, the villains fail, due to Batman being so damn cool as Val Kilmer. 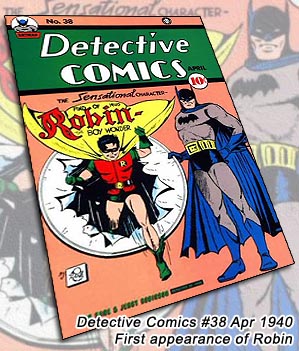