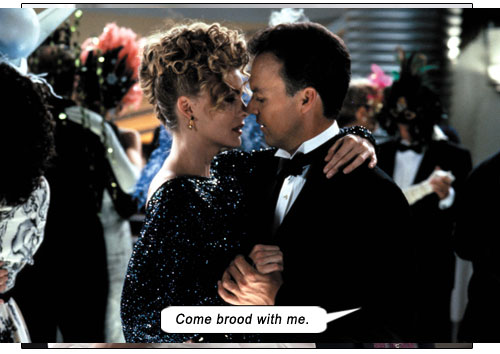 The Bat, The Cat and The Fat.

Something happened between BATMAN and BATMAN RETURNS. The eighties had ended, George H.W. Bush ended his one-term presidency, CGI was invented, and director Tim Burton was so depressed about all these things that the tears in his eyes must’ve clouded his Dark Knight vision.

Crooked businessman Max Shreck makes an underground freak, The Penguin, Mayor of Gotham City, to plot its ruination and his empowerment. Meanwhile, the shy secretary he thought he killed comes back as the vengeful Catwoman, to destroy Shreck and anyone who stands in her way, like the Batman.

So much potential to be a dramatic noir film, but ending up as willfully camp as the 1960’s series that Burton’s own BATMAN (1989) tried to wipe from our memories, BATMAN BEGINS is, in retrospect, a logical stepping stone to Joel Schumacher’s ultra-camp BATMAN movies to follow. What’s with the goony set design? Christopher Walken straight out of a catalogue for showroom dummies? Henchmen dressed as clowns? And penguins with “frickin’ laser beams attached to their heads”! (Throw me a bone, people!)

In a simple tale that features the flamboyant villains Catwoman (Michelle Pfeiffer), The Penguin (Danny De Vito) and Max Shreck (Walken), something mature almost peeks through the tilted angles and ostentatiously fake moonlit rooftops. There are momentary lapses into the darker side of dual personalities, neuroses and psychoses, political chicanery and even murder of children.

The best scene that highlights this subsumed sincerity is when Bruce Wayne (Michael Keaton) and Selina Kyle (Pfeiffer) dance at the costume ball. They are the only two people not wearing costumes — ah, but they are, for their society garb has become their “costume” and their night personas have become their true selves… They’ve recently fisticuffed as their true selves – Batman and Catwoman – and shared a lustful/poignant moment where each made a remark about mistletoe and a kiss. During this slow dance they inadvertently make those same remarks to each other, realizing each other’s secret identities. Selina laments, “Do we start fighting now?” Before this moment they were “finding each other,” speculating over a future they might have had together, dialogue woven with cryptic allusions to their alter egos. There is the undercurrent that they both need rescuing and that they are each other’s best hope for that rescue… And Keaton and Pfeiffer convey this spiraling hope and sudden loss so poignantly, it is heart-breaking. Then the Penguin appears with the trailer-ready line, “You didn’t invite me – so I crashed!” – and everything gets all Adam West again. 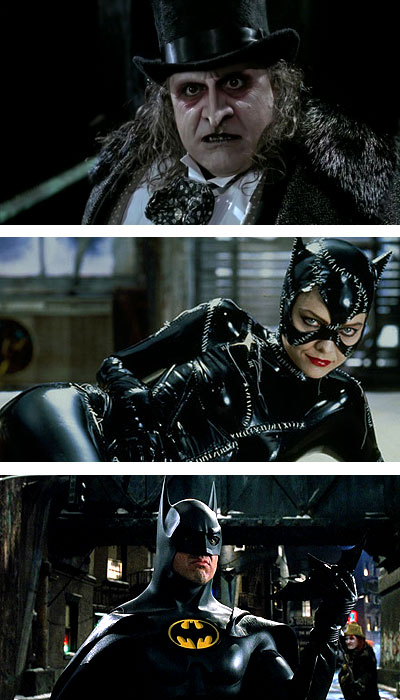 Danny DeVito is deformed fatness as Oswald Cobblepot (aka the Penguin), a freak with crazy flipper fingers, abandoned by his parents and forced to live in the sewers, until he rises up to try and join “normal” society. There is a tragic pathos here that is, again, felt only in tiny snippets, like his need for acceptance, even through criminal acts – like becoming a politician – and with his disturbing death scene.

Michelle Pfeiffer is catnip creaminess, with skin the milky paleness of the inside of a whore’s thigh and lips the color of a baboon’s vagina in estrus. Kudos to the writers for making her Catwoman ambiguous. Her only motivation is the death of Shreck, which makes her just a vengeful vigilante, rather than a villain. While she kinks it up a notch in her faux leather and pussy-whip, Batman brings it to manageable levels of sleaze by wearing his underpants outside his trousers…

Keaton once again proves he is one of the best brooding Batmen to don the cowl, as we meet him in his batcave, uh, brooding.

The film itself suffers its own duality – one thematic angle is dark and disturbing, one does the Batdance. The tone constantly jumps from scathing darkness (the Penguin discovering his tragic loss) to slapstick (Christopher Walken goofing off doing Christopher Walken impressions instead of putting his heart into a three-dimensional villain).

The Penguin’s vengeful plot is to kidnap and drown all the first-born of Gotham – that’s pretty dark stuff, even if it is from a supposedly holy book – but this plot point is given all of 15 seconds screentime before it is thwarted by Batman. So the film resorts to its Adam West ethos and the Penguin’s Plan B is to program an army of penguins to march on Gotham with frickin’ laser beams attached to their heads.

A climax involving penguins… Is anyone buying this?

Even this might have been a workable scenario had the execution not been so callous. The ruination of BATMAN RETURNS is its cheap production design. Burton opted to go the way of BRAM STOKER’S DRACULA and shoot everything on indoor sets. Even the largest “outdoor” sets look like cheap TV. That doesn’t look like real rock, aged marble, or skyscrapers, no matter how young the demographic or how hard I squint. It’s like a child’s vision of what a movie set looks like.

The film’s climax draws on both its commendable and silly aspects. Catwoman sticks out that ass bedecked in touch-yourself pearbottom leather as she’s whipping Shreck (the Good), while having a debate with Batman over leaving Shreck to the police and going home “together” (the Poignant). As he sees her slipping away, Batman rips his mask off for her (the Stupid). For what redundant reason? She already knows he’s Bruce Wayne. Not only that, in the shot a second before, we see that black coloring around his eyes behind the mask – as he rips it off, the black coloring is gone from his eyes (the Stupider). Also, why does his mask “rip” like it’s cheap rubber? (The Stupidest.) How does he usually remove it? How does it come off without tearing? In the comics, it is like cloth, and falls back over his shoulders like a hoodie. What idiot wrote that this removable mask should tear like rubber?

Same idiot who thought penguins was a great climax.