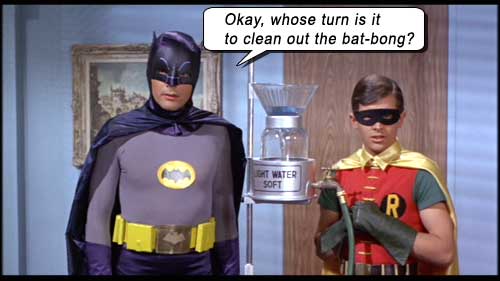 Holy jumble! Where’s the hope of the world now?!

The Bat. The Robin. The Cheese.

BATMAN: THE MOVIE, the big screen fintuzula of the mid-60s fruitopia TV series (released in June 1966, between the first and second seasons of the TV show). The dark avenger of the night, The Batman, played by the greatest actor of his generation, Adam West. Batman’s life partner squeeze peach Robin played by that altar boy fantasy Burt Ward.

As the Dynamic Duo, Batman and Robin employ their superior fighting skills, indomitable intellect and subterranean lair where everything is marked in blind-sized lettering to defeat the most heinous archrivals that the city of Gotham – nay the world – has ever known: the rambunctious Riddler (Frank Gorshin), the jesting Joker (Cesar Romero), the pernicious Penguin (Burgess Meredith) and the deadliest of them all, the calamitous Catwoman (Lee Meriwether).

This United Underworld plans nothing short of dehydrating the leaders of the free world for their own criminal ends! Can the caped crusaders stop them in time? Fending off shark attacks (that leave no bite marks), escaping a magnetic buoy (thanks to a noble porpoise) and disposing of a bomb will drive our heroes to the brink of their abilities. Will they triumph, gentle confessor? 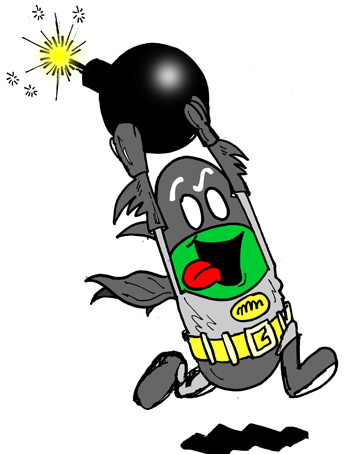 Meanwhile, at stately Wayne Manor, Ms. Kitka and her pointy bra slink their way into the heart of millionaire Bruce Wayne, Batman’s civilian alter ego. Unbeknownst to our tumescent playboy and closed-lip kisser, Ms. Kitka is in actuality – the fiendish Catwoman, whose shimmering spandex pearbottom will stop at nothing to entrap Bruce for her dastardly den of devious death-dealers!

Bruce is kidnapped to lure “that Cossack Batman” to his aid. But unbeknownst to the villainous scum, Bruce is Batman, and his only hope is to escape, in order to slide sensually down his bat-pole to acquire his costume and bring the fiends to justice. A justice that, at the end of his mighty fist, they will not soon forget.

Stop laughing. What’s so funny? You think these heinous villains are not evil? How about Cesar Romero not even caring to shave off his mustache for the Joker role and just painting his whiteface over his mustache? Now that’s evil.

And you think that bomb scene was played for laughs? With Batman carrying that hissing bomb above his head and being closed in by nuns and a stroller and a Salvation Army band and some lovers in a boat and some wooden ducklings that were supposed to be real, and the same army band and the same stroller and the nuns… you think that was a joke? Holy tourniquet green panties, Robin! How come Christopher Nolan replayed this scene identically in THE DARK KNIGHT RISES when Batman races against time to stop a bomb exploding in Gotham? “Some days you just can’t get rid of a bomb!” (Was that Nolan or Adam West? And were they talking about the explosive prop or the movie?)

Like THE DARK KNIGHT RISES, BATMAN: THE MOVIE also addresses the ambiguity of their sexuality—did I say sexuality? I meant vigilantism – the ambiguity of their vigilantism, when Ms. Kitka speaks of Batman and Robin as “vigilantes like the American west” and is put in her place quicksmart by the overacting of Commissioner Gordon (Neil Hamilton), who tells her that Batman and Robin are fully deputized agents of the police force. I wonder, does that extend to their faithful liege Alfred (Alan Napier), who, when entrusted to drive the Batmobile on surveillance, wears a batmask? (On a side note, it’s a good thing the Batmobile is such an inconspicuous undercover surveillance vehicle.) Alfred and Robin surveil Bruce’s date with Kitka, whose idea of “slipping into something more comfortable” was apparently a dressing gown with an even pointier bra underneath.

From the answers to two riddles – an egg and apple sauce – Batman and Robin realize an attack on the United Nations is imminent. Well done, chum! How’d they figure that? Don’t you see? You fools!

The nine leaders of the nine countries of the world gather around a table at the U.N. (because that’s all the countries in the world, right?), all speaking their own language to the others, with no translators. And we wonder why nothing gets done at the U.N. The Penguin, Joker, Riddler and Catwoman appear and dehydrate them into vials of dust. With all their powers the caped crimefighters were too late! 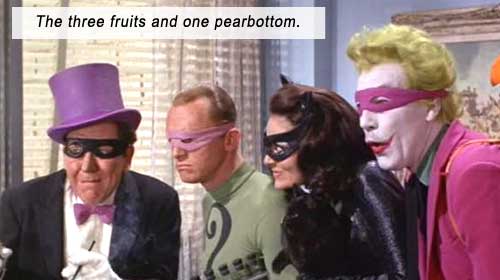 They give chase and the final great battle for the soul of humanity is waged atop the Penguin’s penguin submarine, where we can actually see the folds in the sky cyclorama stretched out behind them! This was a metaphor for the world being flat and ruffled like a curtain. As Batman and Robin BAP and KAPOW in this fight scene that would put the fear into Bruce Lee, with choreography that only the fiercest ballerinas in Russia have ever attempted, the filmmakers are not even trying to disguise the stuntmen any more, wearing Joker wigs and Riddler spandex and a slightly paunchier Batman. It must be a metaphor for the dark avenger’s struggles against a world he can no longer recognize.

Batman and The Boy Wonder restore the U.N. to their non-translatable glory, as Batman sucks in his gut and Robin punches his hand for the hundred-and-fiftieth time. While the fiendish foursome – Catwoman, Riddler, Joker and Penguin – are put behind bars where they belong! And even though the dark avenger does not do the Batusi here, you will be 2-degrees less intelligent for having watched BATMAN: THE MOVIE. And you’ll thank me for it.

But can the jails of Gotham hold the quintessentially quarrelsome quartet, camp counselor? Or will Gotham’s finest prove ineffectual against the scurrilous schemes of the wrathful wrongdoers?