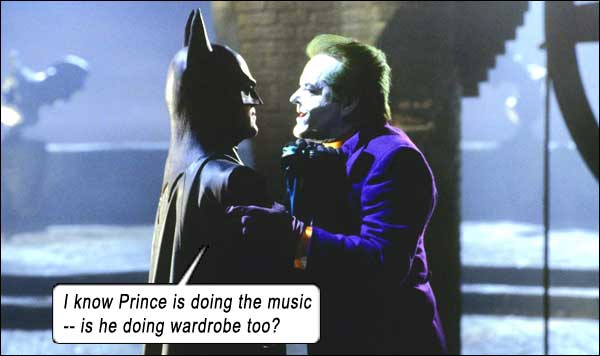 Who knew MR. MOM could make such an awe-inspiring, vigilante crimefighter? With gadgets formulated from watching Martha Stewart, a cape hewn from a reconditioned wooby and an unsurpassed knowledge of daytime soaps, Michael Keaton squeezed his distinctive lip structure into that sacred cowl and surprised everyone to become the Sean Connery of Batmen. 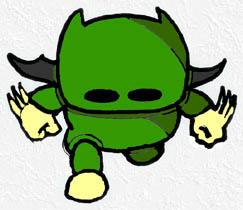 Arguably the Second Great Superhero Movie – after the SUPERMAN franchise tragically ran out of steam (halfway through SUPERMAN II in 1980 and then kept gasping lungfuls of air like a Devonian fish on land plodding forward on knuckled fins) – director Tim Burton, writers Sam Hamm and Warren Skaaren, and Batman Keaton deliver a tale part noir, part comicbook, all Knight.

BATMAN is set in a preternaturally devolved Gotham City, where shadows and steam curl over dank, criminal streets. We meet Keaton’s Bruce Wayne in his early thirties (although he may just be 29 – the Batman’s agreed age through the 70s classic era of Giordano and Jim Aparo comics), the billionaire prince of Gotham, flitting about the rooftops in sawtooth vigilante garb, for what we presume must be his early outings, as a dimestore hood fearfully implores him, while being dangled over a rooftop precipice, “Who are you?”

To which the caustic reply has been immortalized by Keaton, “I’m Batman!” 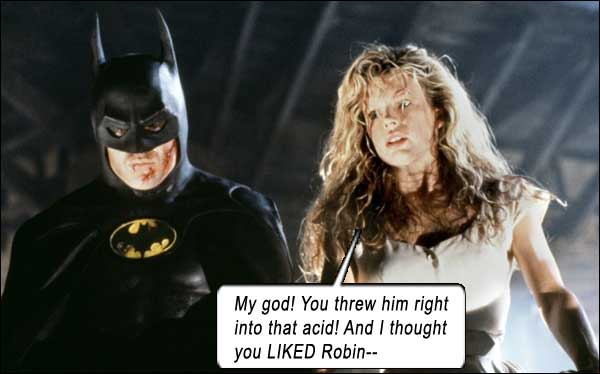 There is thankfully yet no Robin, nor – just as thankfully – Batgirl. But there is the supreme essence of faithful manservantry, Alfred (Michael Gough), the exacting, doughy authoritarianism of Commissioner Gordon (Pat Hingle) and the miscasting of Billy Dee Williams as attorney Harvey Dent. Robert Wuhl acts kinda stupid, Jerry Hall acts – kinda, Kim Basinger steams the screen with her sultry Vicki Vale and even Jack Palance hisses a cameo as a crime boss.

There are two aspects where this movie falls down. Firstly: Prince. An almost unthinkable indictment, coming from a person who has worshipped the ground Prince has pirouetted upon since his entrance onto the music scene, but his incongruous songs – unlike Danny Elfman‘s epic score – serve to diminish the movie’s impact for some strange reason, especially noticeable in the museum-defacing and balloon-parade sequences. 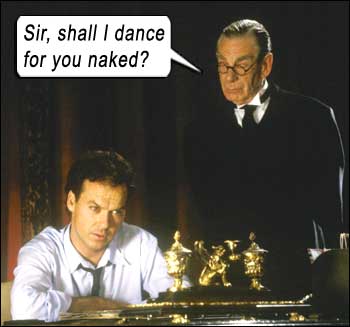 Second bug is the third act that plays like a second act. The lowliest point of the climax is the destruction of the batplane – this ingenious piece of weaponry, brought down by a bullet from a comically-long barrel. (Even in future Batman adventures, it is disheartening how his fantastic multi-million dollar gadgets are destroyed so offhandedly.) Then Batman hoofs it up some cathedral stairs, in pursuit of the Joker, whereupon The Joker, Batman’s arch-nemesis of decades in the comic books, dies in a weak special effect.

Tim Burton does a sincere job of rebooting the Batman image with this dark vision that yet retained its comicbook elements: the high-on-crack colors, the skewed angles, the slap-in-the-face stereotypes, capturing even the moodier modern comics (ahem! “Graphic Novels”) of darker depths of dark depths of depth of suffering darkness. Whew! Need therapy much?

As Bruce Wayne tries to explain to Vicki Vale, “My life is… com-PLEX.”

The franchise may belong to the Bob Kane Foundation, but the Knight belongs to Keaton.

Batman versus Batman
Keaton or Bale? A blow by blow comparison.