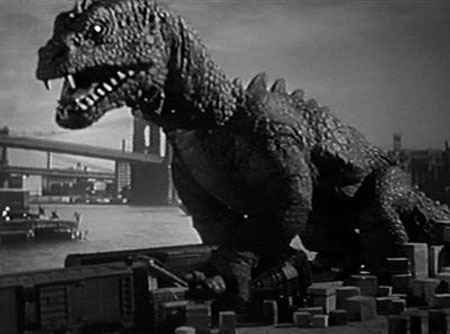 There Were Giants In Those Days – and Harryhausen was the largest!

His name was synonymous with SPECTACLE.

View any movie from the 50s or 60s with a gigantic, roaring, pseudo-prehistoric, collateral-damaging monster and you were probably watching one of Ray Harryhausen’s herky-jerky children of fantastic plastic.

Though he was minimally responsible for the production side of the movies he worked on (only rarely donning the caps of director, producer, writer or actor) his “stop-motion” visual effects method was so innovative and startling that movie-lovers came to refer to a whole genre of films as “Ray Harryhausen” movies.

And why not? Were it not for the blind-man’s-bane Harpies in JASON AND THE ARGONAUTS (1963), or the kidnapped Allosaur in THE VALLEY OF GWANGI (1969), or the damsel-devouring Kraken in CLASH OF THE TITANS (1981), where would those movies have been, had the film-makers opted to have some guy in a rubber suit do Ray’s dirty work? Harryhausen’s creations brought character to the movies – in more ways than one. (No, he didn’t do the seminal stop-motion grand-daddy of them all – his mentor, Willis O’ Brien, did KING KONG (1933). 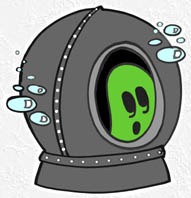 THE BEAST FROM 20,000 FATHOMS, like many of its ilk, sports the barely-legal setup – nuclear tests in the Arctic – before The Beast is unleashed. (During the Cold War, it was de rigueur to detonate nuclear devices willy-nilly, irradiating animals into gigantism causing 45 minutes of cinematic running and screaming…) Then perfunctory wooden acting amidst mundane set design until – more unleashing! Directors and screenwriters of “Harryhausen” movies gleaned so much quality from Ray’s creatures that they were off the hook in providing little more than running, screaming and military stock footage to bridge the gaps between monster scenes.Integrating Harryhausen’s footage into the body of these movies was masterful, utilizing every trick those oldsters knew to retain the illusion of proximity and size of the fictional beasts. Eugene Lourié directs this Beast rampaging through city streets, eating a diving bell, sinking a ship, toppling a lighthouse, looming above the populace, pushing over office buildings – no doubt affecting the Dow-Jones Average egregiously – with nary a doubt it is really performing these feats.

Though it does look goofy by today’s standards, there was a certain level of pseudo-realism attained that magnificently satisfied those pre-CGI audiences and allows even a post-EPISODE III audience to appreciate at least the towering aspirations of the state-of-the-art back then.

Identifying The Beast was an exercise in malarky: The Chick (Paula Raymond) gives White Hero (Paul Christian) a ream of artist’s renderings of dinosaurs, to identify the one that may be The Beast from his unnecessary Arctic tests. From the ream of realistic renderings he pulls the obvious cartoony one (done by a movie studio artist on the quick&cheap) and The Old Paleontologist (Cecil Kelloway) identifies it with a name as faux as its rendering – a “rhedosaurus” (“rhedo” being Latin for “bogus”?), though I’d be apt to question Old Paleo’s credentials with the centerpiece of his lab being a Glue-By-Numbers, anatomically-imbecilic sauropod skeleton purchased from Wal-Mart.

Mandatory running and screaming scenes lead to the mandatory military stock footage, to Christian’s big-chested, square-jawed, all-white Hero having unbridled access to all levels of the military and police forces as if he was in charge – and them obliging his every whim as if he was. The top-level brass in both Army and Navy are somehow always just a phone call away and eager beaver to accommodate White Hero simply because he’s the tallest and whitest guy they know (albeit, this particular Hero has some funky Euro accent sprinkling his American megalomania).

White Hero determines a solution to the Beast problem – i.e. how to KILL this wondrous organism. It seems that after the one paleontologist on Earth (Kelloway) becomes brunch for The Beast, there is no one else to step forward (no zoological organization, no Greenies, no special interest group) to speak for this unique animal’s Right To Life. (Old Paleo’s demise would have been tragic if it weren’t so illegitimately verbose, with him in a diving bell as The Beast bears down on him, as he is in the throes of scientific orgasm, spouting obliquities like, “the clavicle suspension appears to be cantileveric” – whatever you say, doc! Get a closer look at the gullet and stomach and digestive juices for us, wouldja?…)

So The Beast Must Die, in another staple of 50s cinema – The Fiery Finale.

In a final sequence so heart-stoppingly boring that test-audiences couldn’t answer their survey cards from being ASLEEP, White Hero and a boyish Lee van Cleef (!) ride a roller-coaster to the top of a trellis, to shoot a radioactive isotope into the bloodstream of The Beast (don’t ask), while hundreds of troops stand watching like statues. If there was any doubt they resembled statues, the director inserted many, many cutaways back to them to remind us that yes, they did indeed resemble statues. While The Beast frolics innocently amidst the roller-coaster trellis, White Hero and van Cleef, dressed as beekeepers, shoot it, then take about four hours to descend the trellis, while a runaway roller-coaster crashes and starts the aforementioned Grand Finale Fire. While the troops stand like statues. Watching. While White Hero and van Cleef climb down. Slowly. While the troops watch. While they climb.

Thankfully, the inanimate humans in the film were overshadowed by the cutaways of a backdrop ablaze with the roller-coaster trellis, silhouetting The Beast roaring its long goodbye.

Troops cheer. White Hero gets The Chick. But the real Hero of the film was a man who scared the tit-willow out of those boring humans with a plastic model no more than three feet high – RAY HARRYHAUSEN.