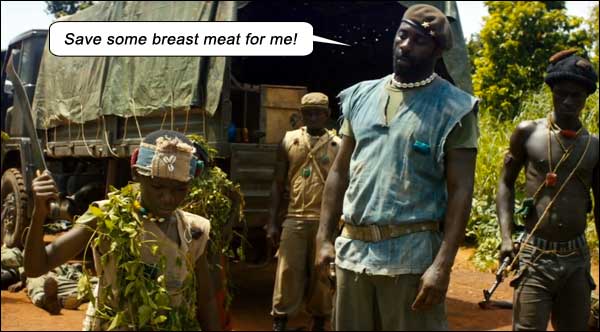 All Beasts, All Nations.

By removing all politics and nationality from its lead character, BEASTS OF NO NATION allows us to see through the eyes of innocence the insanity of man against man for no apparent reason.

During a raid on his African village, young Agu’s father and brothers are gunned down by – guerillas? – freedom fighters? – bad soldiers? while his mother is spirited away by – friends? – sympathizers? – rapists? And young Agu is left alone, fleeing weeping through the jungle. He stumbles across an opposing African guerilla group and accepts their offer to join, not because it is morally or politically right, rather to survive. He never comes to understand who he is fighting for, who he is fighting against, or why. The group’s suave leader, named Commandant, promises Agu that he will find his mother by joining their band.

Thus follows raw and violent atrocities in the name of – we never find out! – as this unnamed African country tears itself apart through military conflict. Agu’s band of mostly boys and teens (and one fully naked Neanderthal, complete with long duk dong) are coerced into inhuman behavior by Commandant, all graphic, all disturbing, in the pursuit of war seemingly for war’s sake. And for what? Is there motivation/rationalization at the end of the rainbow? When a man does injustice to any other man, does being part of a nation justify it?

Unlike BLOOD DIAMOND or MACHINE GUN PREACHER, both of which gave us an overview of their African conflicts, and how young boys ended up as soldier slaves, BEASTS OF NO NATION does not reveal which side is which, or any reasons behind the conflict they are embroiled in, forcing us to simply see the RESULTS of war on the innocent. Agu is made an orphan, but whether the soldiers who murdered his father were “right” or “wrong” is irrelevant, the end result is still Agu as an orphan. Only unthinkable tragedy could have brought each of these child soldiers into this squad, deaths of loved ones or kidnapping, or simple recruitment because they had nowhere else to go. No matter the reasons/rationale, look at these end results! Is this any way to run a human race?

Agu, like all these boys, must necessarily join with the first guerilla group that snatches him up, puts a gun in his hand and orders him to kill soldiers on the opposing side, in return for shelter and succor. Is Agu fighting on the “right” side? Who knows? His voiceover would question every violent and inhumane action, and as much death and dysfunction he visits upon others will return to haunt him a thousand-fold.

He petitions God (whatever that means) to look down upon his army and their atrocities, and put a stop to it. Obviously, that doesn’t work. Because God either doesn’t exist so does not intervene, OR God does exist and is loving this torture-porn so lets it continue. (You can’t have it both ways if you believe your god is moral.) 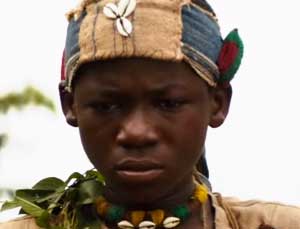 “All these murders and broken bones and venereal diseases and bullets through the intestines — and now they tell me there’s no Santa Claus either!”

Abraham Attah is Agu, in a breathtaking debut performance, in what must have been an emotional drain on his childhood. This 13-year-old Ghanaian isn’t assimilated into the film industry by way of starring in syrup like HOME ALONE or HARRY POTTER; he is baptized in a murderfest where he must slash a machete through a pleading victim’s head! He must suffer the loss of his father, brother, mother and sister, must endure an implied rape, must carry the wounded body of his 13-year-old mute friend through knee-deep swamp, only to find his friend dead when he puts him down…

Attah gives us everything: the joy of family life, the tears of loss and fear, the blank-faced murders, the thousand yard stare; he sells this film – until the great Idris Elba (MANDELA: LONG WALK TO FREEDOM), surprisingly, takes us out of it! Not because of a slouchy performance; no, his Commandant is fearsome, a soft-spoken, adored leader, who can inspire his boys to battle, and who takes sexual advantage of the youngest ones. In a movie filled with unknowns, with seemingly “real rebels” who have never tasted clean water for all we know, for a moment we see the edges of the movie frame when Elba strides out and we recognize a Hollywood star amongst this dengue jungle.

And young Attah matches Elba note for note, in fear, anger, doubt and indignation. (Attah would win the Marcello Mastroianni Award at the 72nd Venice International Film Festival for this role.)

Based on a novel by Uzodinma Iweala, underscored with a hypnotic soundtrack by Dan Romer, BEASTS is written and directed by Cary Joji Fukunaga (TRUE DETECTIVE), who builds the trajectory of Agu’s insanity on a few key moments:

Definitely one of the most disturbing scenes, and the moment Agu tips into insane, is when he is given a machete by Commandant and told to secure his place in the group, by lopping off the head of a pleading captive. Agu hesitates, and when it happens, it is not clean or quick. As the machete bleeds down again and again, Agu narrates: “It is the worst sin – but it is the right thing to do.”

Then there are the moments when we don’t know whether to recoil in horror or laugh at the irony: The guerillas raid a house where Agu embraces an unknown woman, thinking she is his mother. Her tiny daughter is ripped from her embrace and beaten savagely. Agu comes out of his daydream, realizes it is not his mother, and joins in kicking the daughter, while the older boys rape the mother. Agu, nothing left to live for, shoots the mother point-blank in the head, while she is being raped! (Understand, this is not to put her out of her misery, but because she was not his mother.) And – here’s the clincher! – the older boys (who are robbing this house, raping a woman and bashing a little girl) jump off the mother’s corpse mid-thrust and call HIM insane!

Are WE insane if we laugh?…