Wish it into the Cornfield.

Idiotic and contradictory messages fly at us like fart jokes in a movie bankrupt of ideas, which BEDTIME STORIES is. Without the fart jokes. 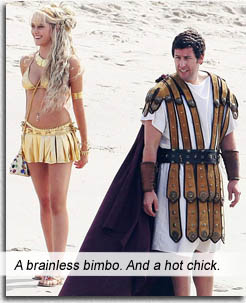 Skeeter Bronson (Adam Sandler), a shiftless janitor, discovers while babysitting his sister’s (Courteney Cox) children, that the stories they make up at bedtime are actually coming true for him. Ever the lazy get-rich-quick type, he tries to manipulate them into telling stories that will make him successful in the hotel business, while trying to woo a hotel owner’s daughter (Teresa Palmer, valley girl), and ultimately falling for the “plain” chick who hates him initially (Keri Russell). Hot cup of Cliché, anyone?

BEDTIME STORIES is not reprehensible because it is a kid’s movie with an implausible happy ending; it is not egregious for its fantasy segments, which are funny and well-produced. It is reprehensible because – like so many “children’s” movies – it applauds laziness and stupidity over hard work and ambition. As Skeeter’s friend Mickey (Russell Brand) warns Skeeter after Skeeter tells a decidedly bland story, “What kind of message does that send to the kids?” Exactly.

Skeeter’s father (Jonathan Pryce) left him a world-class hotel as inheritance, but instead of taking over the family business, Skeeter became the janitor of the property. Now the hotel owner (Richard Griffiths) and his daughter’s ambitious boyfriend, Kendall (Guy Pearce, deliciously fey) plan on revamping the hotel and firing Skeeter. Skeeter, oblivious to business practices and totally incurious on how to rise above his station, is necessarily unhappy about the potential firing, but does nothing to offer reasons not to fire him, such as taking a few business courses, or even elevating his janitorial performance to mediocre.

The hook of the movie – bedtime stories becoming real – is more like a distraction, as Skeeter makes his sister’s children (Laura Ann Kesling and Jonathan Morgan Heit) tell their improvised stories (because he is too numb-brained and uncreative to actually think up fairy tales for them) and is assaulted the next day with real life analogues of their fantasies, such as candy falling from the sky, being kicked by a dwarf, rescuing a damsel being accosted, saving a fat guy on the beach, and meeting all his old girlfriends. (Seems like Skeeter was a real Benetton Playa, as his old flames comprise a black chick, an Asian chick, an old chick, a white runway model, a busty, “thick” chick and a homey chick – no doubt, so that none of Sandler’s actual female base will feel slighted.)

Lesson Number Two for impressionable kids: if you believe in a fantasy hard enough – such as becoming a hotel manager even though you have nil experience or ambition to become one – it WILL come true.

Brit comedian Russell Brand is not onscreen long enough as Skeeter’s best friend, in a too-little, too-late performance that cannot save this fart joke without the flatulence.

Skeeter spoils the MILF’s kids, on the proviso they will make up something favorable for him in their bedtime stories.

Lesson Number Three: Kids, if you want something in life – bribe.

When the MILF gets home, first thing she does is nag Skeeter that she was hoping a little of his free-spiritedness would rub off on her kids, who were usually regimented in their fun. Not only did Skeeter give them every opportunity to be free-spirited (baking marshmallows on the roof of his hotel, etc.), the type of “freedom” that a layabout hippie like Skeeter would impart to her kids would be exactly the wrong type of message – if they were perceptive enough to appreciate it in the first place, which they were not obviously, for their mother could see no change in them. And it is not Skeeter’s fault for lack of trying. If they HAD become as lackadaisical as Skeeter, gleaning the lesson that it is okay to be a layabout all your life, he would have earned an earful of nagging for that as well.

This movie is so mixed up in its message, it disappears up its own inside-out backside – where most Adam Sandler movies go to die.

It is so satisfying hearing old actresses complain about how men want only their fecund, vibrant youth and that after they’ve squeezed out a coupla “miracles” and their stretchmarks are irreconcilable, they’re discarded. Uh, yeh. And? After all the grief the female persuasion burdens us with, after all the rejections and highbrow attitude and gold-digging and getting everything they desire on a silver platter during the years their breasts don’t need wirelifts, they must eventually face the fact that society only wants them during those years! Then comes the expiry date! And after relegating all those male Just Friends to the lower shelf because they never saw them “in that way,” these ex-hotties now desperately booty call those Just Friends, dressing twenty years younger, willing to go Greek – do or say anything – in the hopes that those once-discarded Just Friends still see them “in that way.”

Sexism, feminism aside, the irony is as delicious as candy falling from the sky.