They’re not Monty Python… but they’re on their way. 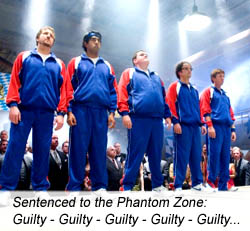 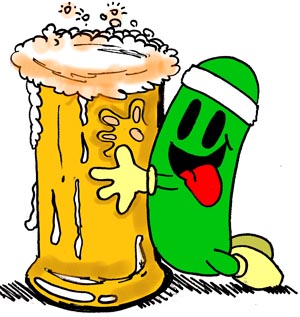 Two German-blooded American brothers, Jan and Todd Wolfhouse (Paul Soter and Erik Stolhanske), who run a brewery called Schnitzengiggles, travel to Germany (pronounced “Chermanny” by all the Deutschlanders in the film for maximum frat-house authenticity) to scatter the ashes of their dead grandfather during Oktoberfest, and stumble upon an underground beer Olympics called Beerfest.

Sent packing by the veteran Cherman drinking team (headed by mad Teuton, Jürgen Prochnow, including fey Eric Christian Olsen and gladiator Ralf Moeller), the boys resolve to return the next year and reclaim their drunken honor.

The Cherman team also accuses Jan and Todd’s grandfather of stealing an age-old super-tasty beer recipe, and their grandmother (game Cloris Leachman) of being a prostitute, all of which the boys discover to be true.

Desperate now to win back everything that their ancestors sullied, Jan and Todd forge their indomitable team of beer drinkers from a group of old friends – a hot-dog-eating champ (Kevin Heffernan), a Jewish egghead (Steve Lemme) and a gay prostitute who would blow them all for a bargain price (Chandrasekhar).

No one cares about the plot – it’s about how to make us laugh with every tiny detail that makes BEERFEST a cult favorite: Heffernan making the ventriloquil dummy repeat Lemme’s lines; the team’s training methods using goat urine; the hornblower not able to blow fanfare; the fact that no matter how much everyone drinks in BEERFEST, no one seems to be drunk – except for the sleeping-with-a-fat-chick scene; the painful recount by Chandresaker of his “ping pong at Ding Dang” tragedy…

The Broken Lizard team are in fine form, absolving themselves of their CLUB DREAD (2004) clunker.

In a mad wink to Prochnow’s primo 1981 role as a U-boat captain, the ultimate contest against the Cherman team is to skull from a giant glass boot without spilling a drop – called “Das Boot.” (They scream “Das Boot! Das Boot!” in this movie more than they ever said the phrase in the actual movie DAS BOOT, which was never.)

I’d explain the physics behind the winning tactic of twisting the boot as the bubble reaches the heel, while someone urinates on my shoe – but right now I’ve got a date to suck on some giant jugs. Of beer.