The Importance of Being Malkovich. 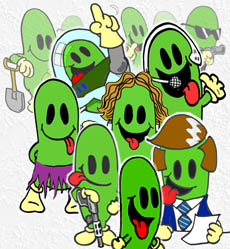 Being Poffy The Cucumber 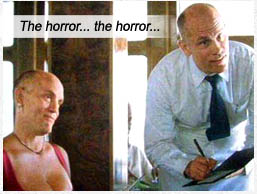 It’s about a puppeteer who finds a portal into the head of a real-life actor… No, it’s about an over-sexed, 105-year-old pirate who runs a company on the 7 ½ floor of a building who has found a way to live forever… No, it’s about a woman who realizes she is transsexual after having sex with her lesbian lover whilst inhabiting the body of John Malkovich… Okay, I give up.

I plead the Charlie Kaufman defense.

Transcending its own marginally sane storyline (penned by that maniac, Charlie Kaufman), this movie stuns us with its audacity: has there ever been a puppeteer as movie hero?; when was the last time action took place on the 7 ½ floor of an office building?; have characters ever spoken plain English to a secretary, only to have her accuse them – in English – of speaking gibberish?; have we ever met such a lovable Grandpa character with such a liltingly filthy mouth (“My spunk is, to you, manna from heaven”)?

Brought to the weird screen by director Spike Jonze, MALKOVICH stars John Cusack as the puppeteer, Craig Schwartz; Cameron Diaz in an actual thinking, speaking, acting role as his wife, Lotte; Catherine Keener being arrogant as usual, as the glibly aloof Maxine (I would sincerely hate to be the guy Keener comes home to every night), Orson Bean as the lovable old lech, Lester, Mary Kay Place as his befuddled secretary whose naked thighs he wants to feel next to his and, of course, John Malkovich, being – well, you know…

Comporting himself in that slightly askew manner that can only lead us to believe he is a closet knife-killer, John Malkovich proves to be quite the sport when it comes to self-deprecation. Skewering himself as thoroughly as the movie skewers him, he does such an exemplary job of acting as if other people were inhabiting him, that we truly forget it is he himself who is calling himself an “over-rated hack,” or lamenting that he should have found a younger body to inhabit, for fear of breaking a hip…

Jonze and Kaufman bend storytelling convention so far backwards so successfully that – like 2001, like BRAZIL, like ORANGE – we could never guess at what might be coming next in this sui generis tale – which is as satisfying in its own way as any left-turn plot twist.

The bizarre intertwining between Maxine and Lotte and Craig-as-Malkovich will not support a simple “Hollywood” solution and commendably, there is no sappy ending with a heterosexual couple finally together after enduring adversity. Another portal has opened, another soul is diluted, and Carter Burwell’s sad, evocative score shadows a tragic, disturbing conclusion.

MALKOVICH is a wonderful balancing act between comedy and pathos: the ongoing reference to “that jewel thief movie,” which Malkovich is constantly accused of acting in, against his denials; the sudden cameo of a well-known Hollywood roisterer as Malkovich’s confidante; a funny little backstory involving Lotte’s chimp, Elijah; Cusack as the tragic, unappreciated puppeteer, walking a line which could have easily led an audience to regard him without pity – as a ball-less, amoral cur, who had to inhabit someone else to realize his own potential – yet somehow evoking our sympathies through his pathetic attempts at progress.

Though the story alludes to sublimated personalities, possession and transmigration of souls, it thankfully steers clear of any pseudo-science or mysticism, holding firm to the credo of not explaining a damn thing.

And what happens when Malkovich enters the portal himself? That, faithful reader, is too Malkovich for mere words to Malkovich.