Question: How retarded do you have to be to enjoy THE BENCHWARMERS?
Answer: Pretty fuckin’ retarded. 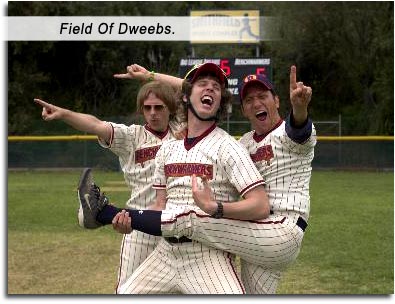 THE BENCHWARMERS turns America’s Favorite Pastime into America’s Favorite Asstime. It pretends to be a movie by attempting a plot: three grown men form a three-man baseball team to beat bullying boy’s teams. Is this what writers Allen Covert and Nick Swardson call plot? Director Dennis Dugan is another matter. He’s a veteran of Adam Sandler films so he’s well versed in directing turds. Sandler produces, staying well out of the camera’s eye. Can you imagine how bad your movie must be when the star of BILLY MADISON, HAPPY GILMORE and THE WATERBOY doesn’t want to be seen onscreen alongside the lead man-ginas?

So where do we start with the ball-aching stupidity?

Let’s start with that half-trick pony Jon Heder. Does he know his career is going nowhere except down a toilet? Does he know he’s still playing Napoleon Dynamite, and that there are other character types available? (Admittedly, not many to a hoss of his half-witted stripe, but available nonetheless. He could maybe try the Kevin James Fatman Dancer, or maybe the Kevin Nealon Non-Funny Cameo type might suit him better. I’m sure he can make a go of the Chris Parnell Beige B-Character.)

Then there’s David Spade, usually able to salvage poorly-written and/or unsavory character roles into watchable sardonic gold. Here, he is a bowl-hairdo cloud-brain that delivers gags as ineptly as his nerd character delivers fastballs.

Jon Lovitz is a billionaire who used to be bullied, who dreams up the asinine scheme of pitting men against boys to teach the boy bullies a lesson, I guess the lesson being that when you grow to be a man, you can still bully younger boys.

Then there is Rob Schneider as Gus. Usually Sandler’s go-to bottom bitch for B-roles and unfunny cameo bits, here promoted to leading man. And succeeding beyond anyone’s wildest expectations! There may a future for this guy in movies yet. He plays a mature, sensible man (whilst surrounded by idiots – cast and crew alike), and they’ve further upped his manliness by having him married to a ’10’ (Molly Sims), who, due to her quest for a child, is always hounding Schneider for sex (making him seem even manlier).

Movie surprises us by having a twist that doesn’t surprise us: Gus (Schneider) used to be a bully! At least now we know how he scored that ’10.’ Lends the movie a teeny wisp of a heart as he must find redemption with a past victim. A touching yet stupid resolution. It’s not much, but it’s something more than Jon Heder’s salad-tossing buck teeth and David Spade swiping at baseballs like a menstruating girl.

As with all movies about bullies, nerds, dorks and Jon Heder, it takes the Path Most Traveled in lauding failure and ineptitude over success and aptitude, sending mixed and blatantly WRONG messages of self-belief to a whole generation of nerds who are going to wonder why the snide world is stepping all over them even though they’ve got good hearts and own a multitude of STAR WARS action figures.

Just because Bill Gates is a nerd who became a billionaire doesn’t mean that all nerds are destined to be billionaires. Case in point: Arnold Schwarzenegger was a man’s man, a bully, a go-getter who only had time for weightlifting and pussy. He was a jock, a middling intelligent, bodybuilding automaton with an unstoppable desire to be at the top of his career. Three careers later, at the top of each, I don’t think anyone in the world would consider him a nerd in any sense of the word. See? Powerful, aggressive bullies can make it too! Which means that nerds can also fail. Put away the action figures and go outside, you ninnies!

Interesting to note that both Sandler’s bumboys are here, past and future: Schneider (who is usually insufferable, and here very suave) and Swardson (who is usually funny, but here plays an insufferable agoraphobic, as well as co-writes a load of gags that fall flatter than Keira Knightley’s chest). I don’t EVEN want to spend the time figuring why. Just hit this movie in the head and take a walk…

From working Bumboy to out-of-work Hero.
Rob Schnieder used to squeeze in a cameo or B-role in almost every Sandler movie up to this point. Of late, his presence is noticeably (and thankfully) missing, replaced by another tool who is younger, better-looking and, fortunately, funnier – Nick Swardson. One wonders at what transpired between Sandler and Schneider regarding this gradual replacement: was it a falling out? Inconvenient scheduling? Career choice? Was it because he came off as such a hero in this film and Sandler’s ego/onscreen persona clashed with it? Maybe it was just the regular upgrade that every man goes through in middle age, but usually with chicks: replacing a worn model with a younger, better-looking and funnier one? We can only speculate…