So Close… Yet So Beowulf. 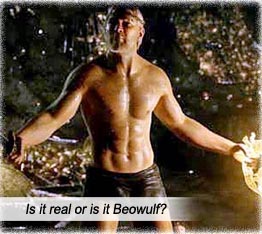 “I am Beowulf!” yells Beowulf.

Five minutes later, he full-throats again, “I am Beowulf!” for those arriving late, we presume… Divebombing into a raging sea of serpents, sword slashing on bloodied sinew, warrior man-meat glistening with sev– “I am Beowulf!” – Okay dude, now you’re just feeding some deep-rooted insecurity complex…

“Beowulf” is the oldest known English epic poem (Anonymous author), one of the first pieces to be transcribed from its oral tradition to manuscript (somewhere between 700 and 1000 AD.)  That’s a pretty awesome pedigree, with a hundred modern media incarnations shouldering their claim-space, so to tackle another incarnation one needs to bring something pretty extraordinary to the table. And Robert Zemeckis’s BEOWULF is definitely extraordinary – in one sense. And definitely mediocre in all others…

The extraordinary aspect of this 2007 incarnation is its 3D-motion-capture method. Pioneering this “realistic” method on THE POLAR EXPRESS (2004), Zemeckis now hones it to breath-defying proportions. Nothing is real, but it is obviously emulating reality through sensors on actors’ faces and bodies, and the zenith of “3D-cartoon” technology. At first, those bi-color glasses suck all the joy out of the moviegoing experience; then once you get used to them, you marvel at the whizbang technique itself, even though many action passages threaten to incite ocular myasthenia; after all the 3D wonder has dissipated, you can sit back to enjoy the movie on its movie merits, but by then, you’ve figured out it has sacrificed most of those merits for the sake of whizbang and annoying glasses.Now that was a whole lotta something for a whole lotta nothing. But I’d already paid for the parking, so I guess I was obligated…

In this Ye Olde English tale (set in Denmark and Sweden), lush lech King Hrothgar (voiced by Anthony Hopkins) and his reveling court are regularly terrorized by the ugliest person/creature in the world, with an oversensitive external eardrum, named Grendel (Crispin Glover, whose main dialogue outbursts consist of the word “Raaaargh!”). From across the treacherous seas (we imagine Zep’s The Immigrant Song accompanying him) comes Beowulf (voiced by Ray Winstone) and his merry men, borne only with the desire to accrue glory in slaying Grendel. A tacit bonus prize is Hrothgar’s nubile queen, Wealthow (Robin Wright Penn), whom Beowulf wastes no time in showing off his pecs to.

In the Great Mead Hall, Hrothgar’s manservant, Unferth (John Malkovich), pooh-poohs Beowulf’s tall tales (causing more unnecessary proclamations from Beowulf about being Beowulf) and Hrothgar unveils a gleaming chalice as a prize for Beowulf were he to defeat Grendel. Beowulf illogically figures that to beat Grendel, he must strip naked. That, and to give the queen a no-hands “wassup.”

In response to Beowulf’s men roaring ribald drinking songs into the night, Grendel appears at the Mead Hall and kills almost everyone, before his arm is ripped off by a nude Beowulf with artfully-obscured genitalia. (It irks me that our society still giggles whenever male genitalia are scantily-hidden by foreground objects – it’s a juvenile practice for juvenile viewers and pulls you out of the story quite forcefully.) Beowulf’s liege, Wiglaf (Brendan Gleeson), survives the attack, to fight and make running gags another day.

Grendel retreats to his dank subterranean domicile, mortally wounded; a poignant moment when we realize this “monster” is only a pathetic wretch with oversensitive hearing who, like many young garage bands will attest, only wanted the neighbors to “turn down that damn noise.” His most powerful witch mother (who looks like Angelina Jolie, only hotter), cradles him in her lullaby arms sadly, at which point Grendel whispers another gratuitous “Beowulf!” and dies (thereby promoting the second-ugliest person in the world to first place), which sends his mother into a dragon vendetta against the man so named.

There are plot twists which depart from the original tale, but this movie ties all the familial threads together very intriguingly: We discover that Hrothgar had “relations” with the witch to spawn Grendel – his son! When Beowulf enters the dank chamber to finish off the witch, she seduces him by simply turning up as Angelina Jolie. Years later we will discover that the dragon that firestorms Beowulf’s castle and causes the sacrifice of his arm and life is, in fact, the spawn of Beowulf from his union with the witch. It’s all very DAYS OF OUR LIVES and kept pretty succinct, whereas the original legend rambles on with trysts hither and thither complicating things… and that Olde English doesn’t help…

There is minimal exploration of other themes, but they seem forced at best: Beowulf’s lament of his legend growing greater than he ever was; of his age precluding him from iron-thewed battles, etc. but the movie itself knows that there is not much to itself, except its grandiloquent Things That Come At You From The Screen.

Though some viewers had trouble adjusting to the eyes of the characters, it all seemed quite realis– “I am Beowulf!”