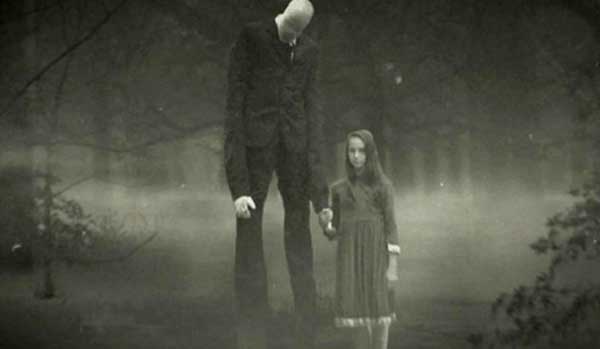 The parents of the injured girl really appreciate you turning her attempted murder
into a horror wankfest. Thanks, Movie!

BEWARE THE SLENDERMAN is not sure whether it wants to be a documentary about two Wisconsin girls attempting murder, or a horror movie about a creature that might be real.

The girls (12-year-olds Anissa Weier and Morgan Geyser) are obviously mentally unbalanced when they claim they tried to murder their 12-year-old friend in 2014 to appease an internet concoction named “Slenderman,” yet filmmaker Irene Taylor Brodsky frames this doc as if Slenderman really exists, by showing shots of him (a tall, gangly man in a black suit with a completely white head) in various locales. Film seems to play apologist for the two girls, as if maintaining that the entity being shown is real and they are not fully to blame.

It’s BLAIR WITCH meets MOTHMAN. And is that really appropriate when there’s a little girl out there recovering from nineteen stab wounds due to this overwrought jape?

I have not seen Brodsky’s other work, but she has completely lost the point of this particular film. She is trying to creep us out with ominous music and weird visuals of the lead character. But the “Slenderman” tag has only been applied to this case for sensationalism. Is it at all relevant to the fact that a girl was stabbed nearly to death? Even the title is sensationalism – not “The Slenderman Stabbings” or “The Waukesha Internet Incident,” but the word BEWARE in the title – really?! – like we have to “beware” an actual Slenderman and not its creators/promulgators who are causing all the trouble, or the gullible people who are doing things to appease it.  The only reason this film is given any credibility by the viewing public is because, ironically, people are so credulous! Audiences love to believe any far-fetched horror tale, and in framing the film in this horror movie manner, Brodsky appeals to that naïve demo that feeds off clickbait and fake news.

But there is a more horrifying and judicious documentary that could have/should have been made around this incident – the sociological angle of how an internet meme could gain enough popularity to captivate two young girls to the point of murder. There is also the story to be told of the girls’ psychosis, not the blunt fact that they tried to murder a girl – but how this idiot society drove them to be this gullible.

They claim their actions were “to appease Slenderman,” but does that afford them ANY LEEWAY AT ALL? No. So stop bringing it up! There is a deeper answer in relation to their upbringing in this social media-drenched society. Though this doc shows us the origins of Slenderman on the internet, it is done in a way that makes the character seem scary, when in reality, the scariness is in the gullibility of the uneducated hordes.

In the final telling, SLENDERMAN is treated like MOTHMAN – that other mythic creature that people supposedly sighted many times around West Virginia. Another harbinger of death, Mothman – like Slenderman – only appears to the gullible, while the rest of us keep leading lives with our eyes closed to this superstitious idiocy. So Slenderman begins to feel like a harmless superstition. But it is not! Because it has led to attempted murder. And it should not be treated with the flippancy of Mothman. The first established FACT this film should relate is that we are talking about an internet meme, not a tall faceless killer on the loose influencing young girls. We actually get this explanation about 30 minutes in. Because Brodsky wants us to piss our pants first. 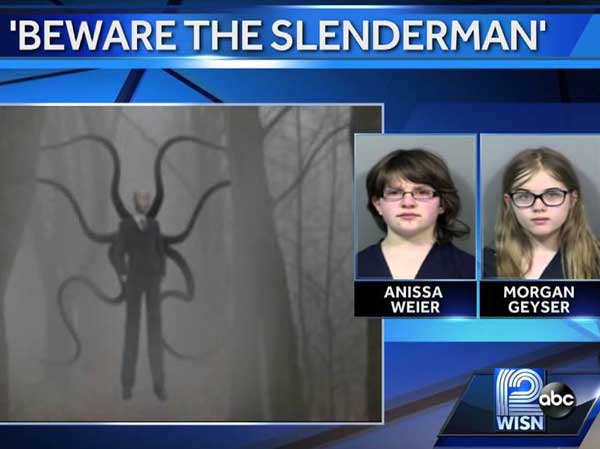 Because the FICTION is more important than the suspects.
You go, ABC News, you sensationalistic asshats!

Interspersed with interviews of the girls’ families and black-and-white interrogation room scenes that are angled like Batman-Villain cameras, Brodsky keeps inserting “horror movie” shots of Slendie appearing to people, without any title cards warning us that this is a “dramatization,” or any other indication these shots are pure flummery.

With the dearth of information on imdb and Wikipedia in relation to this movie, I suspected this was just another great BLAIR WITCH marketing ploy, but with the inclusion of the great evolutionary biologist Richard Dawkins offering his views on cultural memes, I could accept at least the attempted murder case was real.

Slenderman is visually just another iteration of the Shadowman, or those aliens from the 1960’s LOST IN SPACE episode (“We want the mechanical man!” – meaning the Robot). More modern visual iterations include Jack Skellington or even the long men with white heads in PINK FLOYD’S THE WALL.

A stop-motion version of the classic Pied Piper tale reminds us of Slendie’s cultural mnemonics. A reputation for taking children, like the Piper took the children of Hamelin after the townsfolk refused to pay him. Again, ominous music, meant to scare us into … uh, “believing” in Slenderman – ? You tell me, Brodsky. Do I soil my panties when I hear a piper at the gates of dawn?

With so much more screentime to fill, Brodsky ends up humanizing the girls through extensive (i.e. boring) interviews with their parents. But instead of Morgan’s parents showing us a doll house she built with tiny pieces of pizza on the table and a tiny computer screen, the documentarian should have delved into how the parents went wrong in their raising of the two attempted murderers. Instead, we get tears and syrup stories about how “normal” the girls were – a fact which is demonstrably untrue…

Sigh… wake me when the Mothman arrives…

If you voyeuristically get off on graphic descriptions of murders mouthed by young girls, and if you sincerely believe the Slenderman might also be coming for you, then BEWARE THE SLENDERMAN is your cup of poison. I don’t really care about the fates of the two girls – they are reportedly facing sentences up to 65 years. Ultimately, this is just an overlong doc about two nutjobs who don’t really deserve their fifteen minutes, let alone two hours. And there’ll always be nutjobs in the world. Look how many came out of the woodwork in America for the election of the white supremacist. Beware the non-slender man!