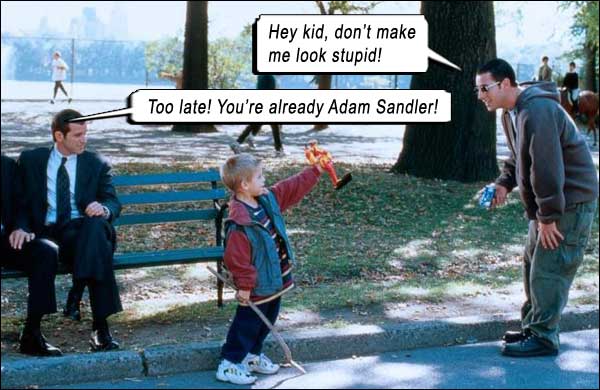 Raising a kid is easy!

Especially if you’re a shiftless imbecile with no talent, goals, ambition or responsibility. Cue Adam Sandler.

Playing Sonny Koufax in BIG DADDY as only Sandler can (somewhere between mildly retarded and idiot savant), raising an abandoned five-year-old, Julian (played by Cole Sprouse and Dylan Sprouse), Sonny’s parenting methods involve lots of newspaper and convenient screenwriting.Whenever Julian wets the bed, or vomits, or demolishes the kitchen, Sonny lays down newspaper – never cleans the mess, just lays newspaper over it – presumably to show the fairy cleaners where the mess is. It works, for when the action moves to that room again, it is spotless – except for its dumbo-jumbo décor simulating some kind of late 90s biscuit-thrower loser élan. As with most Sandler movies, intelligence is a concept as far removed from his lead character as comedy is from Rob Schneider. Who needs intelligence when you’ve got a chic, neon “Live Nudes” sign? And Rob Schneider. The Book of Revelation is funnier than Rob Schneider. Which effectively means there is no comedy within poo-flinging distance of this seriously misdirected malformity.

At its best, Sandler tries hard to do what he is being paid unwarranted millions to do – act. At its worst, it stoops to asinine scripting and punchlining gays. And there’s that Rob Schneider thing.

Julian is accompanied by an accusatory note from his abandoning mother, stating he is the accidental spawn of Sonny’s roommate, Kevin (misused Jon Stewart, THE DAILY SHOW), who is out of town. Sonny, possessing the intellect of a stray dog, takes it upon himself to unofficially adopt Julian. Cue story arc of irresponsible loser finding responsibility and love by having to raise a child.

Though director Dennis Dugan and writers Steve Franks, Tim Herlihy and Sandler himself would like us to believe that this is the burnt-out cliché they are retreading for our bored-to-suicide selves, their script is so rife with stupidity that they can’t even get that simple Hollywood cliché across in one piece. For Sandler’s character is an imbecile – more than an imbecile; firstly, he only adopts Julian for pussy’s sake (trying to show his leaving girlfriend that he can assume responsibility by being a father); secondly, his parenting methods are harmful and ignorant, physically and psychologically, not only to his young charge, but to all who deal with Julian (from tripping rollerbladers, to urinating in public, to an instance of Sonny breaking into a man’s home, threatening him with bodily harm and stealing from him, in an effort to sate Julian’s Halloween jones). Advocating selfishness and laziness, Sonny’s principal tenet is “Do What Thou Wilt,” regardless of courtesy, social ethos or laws. The last person to advocate this credo – Aleister Crowley – was dubbed the “wickedest man in the world.” Verily, there is a message here – exactly the opposite of what BIG DADDY tries so lamely to convey. 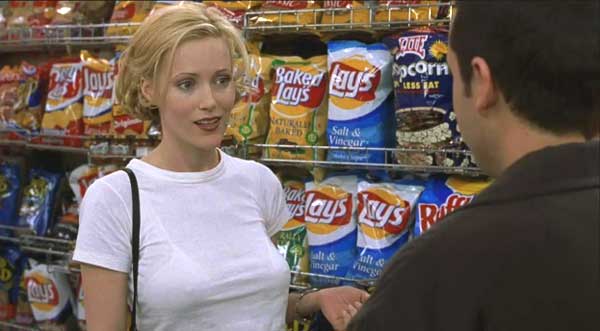 A pair of boobs.

At one point, Sonny explains to Julian how they have to study first and play later. Once. Every parent in the audience must have done a spit-take of toxic theater coke over their cardboard hot dogs when Julian docilely agreed to Sonny’s suggestion without whining for cake or to stay up late, or crying inconsolably for six hours nonstop. Kids reflect their parents – Julian’s upbringing was from a mother so irresponsible that she would palm him off to an accused father (which spawns its own encyclopedic dialogue) without even ensuring that he was delivered safely – and no child with a background like Julian’s would civilly agree to “study first, play later.”

If you cannot see what is wrong with the above picture, you must surely be this movie’s demographic: sophomoric, childless, late-teen who pays to see Adam Sandler films.

After Social Services arraign Sonny on fraud charges and take Julian away, a montage and lame version of Guns ‘n’ Roses’s Sweet Child of Mine (which makes me want to cover Sheryl Crow with newspaper), sparks a dim bulb in Sonny’s brain, making him realize he loves Julian enough to legally fight to get him back.

Layla (Joey Lauren Adams, as always sounding like she’s squeezing her ingratiating preschool voice out of a plush toy) provides Sonny’s romantic interest (though not a shred of chemistry) – and any woman psychotic enough to sex a one-day-a-week tollbooth operator is not shuffling a full deck of self-esteem to begin with, which probably explains why she would give up a major career opportunity to instead romantically represent him in court. Furthering her obsequiousness, she sits quietly by as Sonny proclaims publicly that he doesn’t have to worry about money because SHE has a good job. It’s called idiocy in any voice.

A message almost peeks through during these final scenes, when Sonny proves that his ever-disparaging dad (Joseph Bologna) has attended his court case not to see that Sonny goes to jail, but to ensure that he stays out of it. But by then it’s too late.

Ten thousand weak-chested Hooters jokes later, the full cast enjoys their contrived resolution at Hooters, standing around uncomfortably aware of the “fourth wall” they need to face to get their screentime on (like an insufferable episode of that RAYMOND show or the equally unfunny and insufferable FRIENDS), with Layla sporting a lesbian-short “motherhood” ‘do, having inexplicably married Sonny and horrifically spawned a toddler loser of their own…