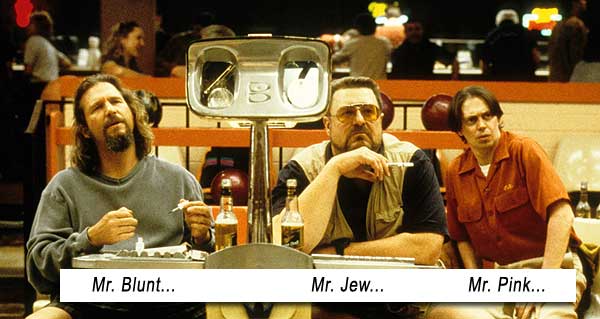 All The Dude ever wanted was his rug back.
–The Dude, THE BIG LEBOWSKI.

Thus it begins. Two low-rent thugs mistakenly terrorize shiftless stoner Jeff Lebowski (aka The Dude) instead of the rich mark they were meant to threaten, also named Lebowski. They pee on The Dude’s rug for good measure, precipitating the rug’s demise. That rug really tied the room together. And by Creedence Clearwater Revival, The Dude shall have restitution!

Jeff Bridges brings a breezy effortlessness to The Dude that is the heart, soul and hash pipe of this culture-gasm called THE BIG LEBOWSKI. He doesn’t just “make” the movie – he IS the movie. They say John Wayne was tilting towards Rooster Cogburn all his life. The same is true of Jeff Bridges subsuming himself in Jeff Lebowski, nay, The Dude. No matter how many more films Bridges may make in his lifetime, he will forever be remembered as The Dude, or His Dudeness, or Duder, or El Duderino if you’re not into the whole brevity thing.

And he can claim to his grandchildren that he once did a whole movie in his pajamas.

The first three viewings of THE BIG LEBOWSKI will wash over you before you realize it even has a plot, as you wallow in the headrush aura of Bridges playing The Dude as if these lines are just occurring to him as the camera rolls.

Set in the art-and-porn surfer-bowler underbelly of Los Angeles’s Venice Beach locale, by the fifth viewing, you will realize there are other actors sharing the lens: John Goodman as The Dude’s high-strung Jewish gun-toting, ex-war vet, bowling buddy Walter (“I don’t roll on Shabbos!”), Steve Buscemi as their mousy sidekick Donny, whom Walter has no patience for (“Shut the fuck up, Donny!”); David Huddleston as the Big Lebowski of the title, the billionaire whom the low rent thugs should have visited. If they had, we wouldn’t be here right now, with a revolution of in-gags and cult quotables.

Comes Philip Seymour Hoffman mewling in the middle background as the billionaire’s liege; Julianne Moore as Maude, avant-garde, elitist artiste who re-kidnaps the Big Lebowski’s rug after The Dude takes it as restitution for his own demised centerpiece; Tara Reid as the billionaire’s trophy wife Bunny Lebowski, who is the person actually responsible for the whole mess leading to the micturating on The Dude’s rug…

Ben Gazzara makes a cameo, as does Sam Elliott’s Mustache, bringing Sam Elliott with it as The Stranger, narrating in that baritone velvet, “The Dude abides.” (That mustache recently insured Elliott for a million dollars with Lloyd’s of London. It knows it just wouldn’t look the same without him.)

And there is John Turturro as rival ten-pin bowler, the ball-tonguing, ambiguously-Mexican The Jesus. Not pronounced “Haysoos” and not just “Jesus” – The Jesus.

A plot happens while no one is looking: a kidnapped girl (“They’re gonna kill that poor woman!”), a cut-off toe (“You want a toe? I can get you a toe, believe me”), a porn king (“Mr. Treehorn treats objects like women, man!”), a ransom drop gone horribly wrong involving Walter’s underwear (that’s the ‘horribly’ part), and some nihilists led by Peter Stormare and Flea (“We believe in nussing, Lebowski. Nussing! And tomorrow we come back and we cut off your chonson”). But the plot itself is merely McGuffin, in the parlance of our times, wending its way like a stream of consciousness film noir pulp novella only to prop up the cannonade of one-liners, white Russians and a nice marmot. 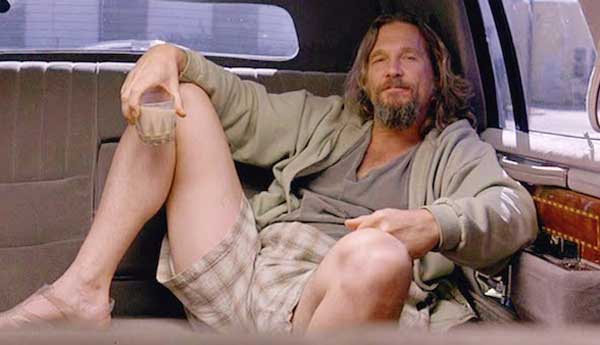 As convoluted as the story gets, it threatens derailment at every turn with subplots and left turns: an hallucinatory dream featuring a Kenny Rogers song from his days of dropping acid (Just Dropped In), tracking the thief who stole The Dude’s car (“Is this your homework, Larry?”) and Julianne Moore making men uncomfortable, saying “vagina.”

Being a Coen Brothers film, things don’t always go as expected: someone dies, someone conceives, and someone just dropped in to see what condition my condition was in.

Is it the best film ever made? The reviewers will revile, the purists will pule, the Church of Lebowski will effuse. One thing is certain: It’s good knowin’ he’s out there; The Dude. Takin’ ‘er easy for all us sinners.