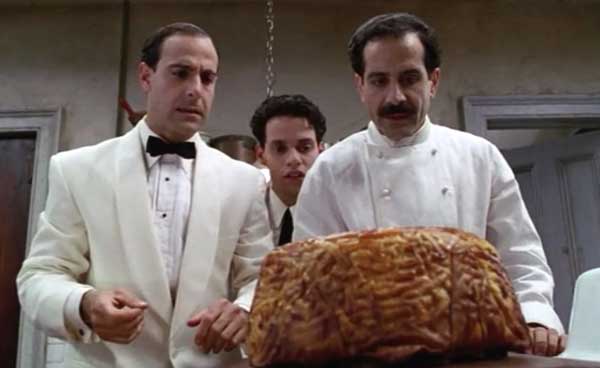 “Wait, I saw something like this in a Sigourney Weaver movie,
and it didn’t end well…”

Stanley Tucci outdoes himself with his directorial debut BIG NIGHT, the poignant, funny story of two Italian brothers risking it all on one feast that might save their failing Italian restaurant.

Tucci is everything to BIG NIGHT. He is co-writer (with his cousin Joseph Tropiano), co-director (with Campbell Scott), and star. Even his character, Secondo, has many roles – manager, cook and frontman for his authentic Italian restaurant on the Jersey shore. As a recent American immigrant, Secondo is trying to make the restaurant work by offering only bona fide Italian cuisine, but customers would rather flock to the generic Americanized Italian restaurant across the way, Pascal’s.

Tony Shalhoub immerses himself in the role of Secondo’s older brother Primo, head cook and gourmand, impatient to the point of murder towards the “Philistines” and “criminals” with no culinary appreciation who patronize their restaurant. He serves Italian dishes not as customers imagine them to be, but in the traditional old-school manner, which causes confusion and dissatisfaction. Though Secondo doesn’t mind bending to the wishes of his boorish customers’ palates, Primo has aneurysms: when a customer requests a side of spaghetti with their risotto, he fumes, “They both are starch! Maybe, I should-a make a-mashed potato for on the other side?” 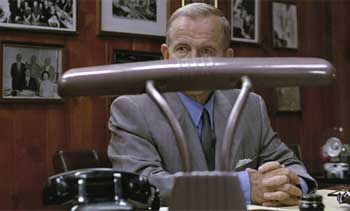 Ian Holm is Pascal, a boisterous gangster who owns the successful restaurant in direct competition with Secondo’s, even though their food – according to Primo – is “RAPE! The rape of cuisine!” Pascal starts as a lovable, funny character (“You must bite your teeth into the ass of life!” – replete with his jaws on Stanley Tucci’s bottom), representing himself as a businessman friend to Secondo, but something dark lurks beneath his benevolent exterior.

Minnie Driver is Secondo’s girlfriend, whom he refuses to sleep with, to remain pure until they marry. Yet he has no problem having an affair with Pascal’s wife (Isabella Rossellini). Even this subplot is an indication of how “old-country” Secondo is.

When Secondo cannot secure another bank loan to keep his restaurant afloat, it is Pascal who comes to Secondo’s aid, not with money, but with a life-changing promise. Always touting himself as someone who hobnobs with high society, Pascal promises to coax a well-known jazz musician into Secondo’s restaurant, a promotional visit that would put the small restaurant on the mealtime map. A promise with seeming heft behind it, as the frames on Pascal’s office wall attest, showing him carousing with Hollywood bigshots. It’s the last shot for Secondo and Primo, their Hamburger Hill, their Big Night…

BIG NIGHT comes out of left field and startles with its brilliance. Such controlled, beautiful filmmaking! In the opening scenes, we meet the brothers in the kitchen, cooking (along with Marc Anthony in a subdued role as their assistant; we’d never pick him as the entertainer who would marry that fly-girl made good). Then Tucci does a walk-through of the restaurant, a small affair that we can see elicits his utmost pride; his placement of ashtrays, picking lint off tablecloths, etc. Magnificent underplaying. Tucci has spent as much care and pride in crafting this film as his character has in crafting his restaurant. 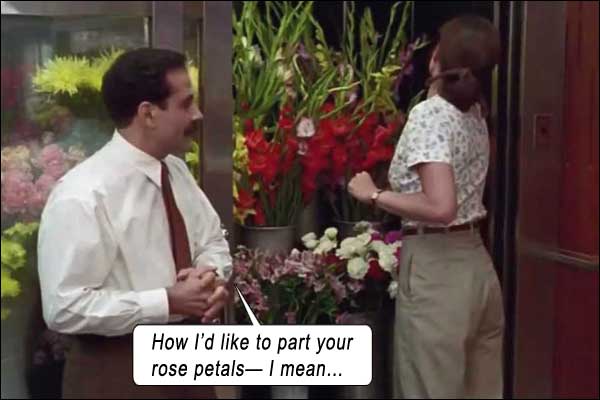 The Old World music sets the tone, the vibrant characters carry the plight, and the cooking seals the deal. The cooking! Making pasta from scratch – from beating the eggs and flour to the flattening and cutting of the dough into strips! Aromas leap off the screen; olive oils and basil and sweet peppers, fresh breads and cheeses; Secondo describing the dishes in delicate, mouth-watering detail…

Every detail of the film conspires to keep it entertaining and fresh: Campbell Scott’s insouciant car salesman, Secondo waving a quick goodbye behind his back, Pascal referring to Secondo as “This fuc-king guy!,” Primo’s ham-fisted attempts at asking out the Flower Lady (Allison Janney); the subtle 1950’s élan, even eccentric details like Secondo meeting with Pascal, deferentially asking for a loan, and Pascal openly creating discomfort, by making Secondo sit in a much lower couch with a desk lamp obscuring their sightline to each other. (This is a remarkably brave comedic shot, as both POV shots – Tucci’s and Holm’s – show the desk lamp obscuring each of their faces!)

A story that will arc us high and take us very low indeed, as our hearts beat in simpatico with Secondo’s agitation over the course of the Big Night that would make or break him.

BIG NIGHT is ultimately a tragedy, a tale of devious agenda and trust betrayed, yet in its final scene, a reconciliation that will steal our breath away with its impact: another brave cinematic rarity – a long, unbroken take (with Tucci actually cooking an omelet in real time, and serving it to himself, Anthony and Shalhoub!), with no dialogue, that builds to uniting the two brothers in one beautiful human gesture. As it opened, the movie’s closing is a bookend, the two brothers in the kitchen, united. If the movie was brilliant up to that point, now it was immortal.

Unfortunately, Stanley Tucci must fund his directorial efforts with his acting gigs (in crafted B-roles like JUNO and SPOTLIGHT, and silly dalliances like HUNGER GAMES and TRANSFORMERS: AGE OF EXTINCTION). To date, BIG NIGHT is still Tucci’s best helmed film.