Greg Brady and Danny Partridge face off in a battle over BIGFOOT!

The horror, the unmitigated horror – of watching Danny Bonaduce (aka Danny Partridge) trying to find a facial expression besides Douche No. 3. He’s Harley Anderson, a radio talk-show host who clears 50 acres of forest to hold a rock festival. Barry Williams (aka Greg Brady) is Simon Quint, a treehugger trying to stop him. When Anderson offers Quint a slot on the bill to play his limp-wristed folk songs, Quint allows the destruction to go ahead (some principles!). 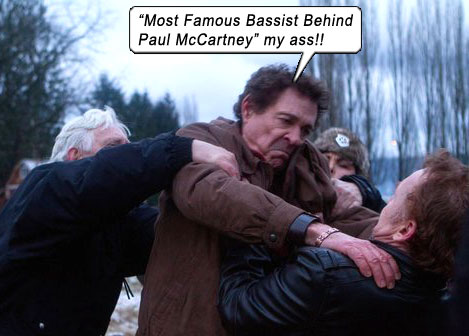 During the “festival” (which consists of 40 hillbillies that I am guessing are the production crew’s girlfriends, boyfriends, and close family members) Bigfoot attacks; well, not exactly – a half-assed computer-generated simulacrum of a 40-foot ape pretends to attack, and the shots are composited with footage of the girlfriends and hangers-on. It’s enough to kill Alice Cooper (yes, the real Alice, in full makeup, and almost out-non-acting Bonaduce).

Directed by Bruce Davison (the name vaguely familiar? Think Senator Kelly from X-MEN, who gets turned into an aqua mutant), BIGFOOT is a SyFy Channel production – so it has NO production values. Davison gets in on the action as a sheriff who can act; character actor Howard Hesseman as a councilman who can’t. Female sherriff is once-sultry, ex-Playboy bunny and femme fatale from TWIN PEAKS, Sherilyn Fenn, now fat and unrecognizable, except for her beauty mark. (Guess she didn’t marry the right producer while she was still hot.)

Danny Partridge and Greg Brady have a barroom brawl over Partridge sleeping with Brady’s mom; ironic, considering Barry Williams actually slept with Florence Henderson. To start the brawl, Williams asks nicely to borrow the guitarist’s acoustic guitar (from the band onstage at this pub), which he then breaks over Bonaduce’s head. And the guitarist remains seated onstage just watching instead of knifing Greg Brady in the neck for smashing his guitar! What the FUCK universe is this movie set in? We can forgive a little for lack of budget and effects, we can even forgive a little for non-acting – but for the non-human reactions in that scene alone, everyone involved with this production should be knifed in the neck!

Bonaduce goes after Bigfoot to kill it, for ruining his rock show, and Williams tries to stop him, because Bigfoot is part of Nature that Williams is so concerned about until he is allowed to play his folk-suck songs amidst its devastation. Along the way, their laughable “acting” “careers” are once again knifed in the neck.