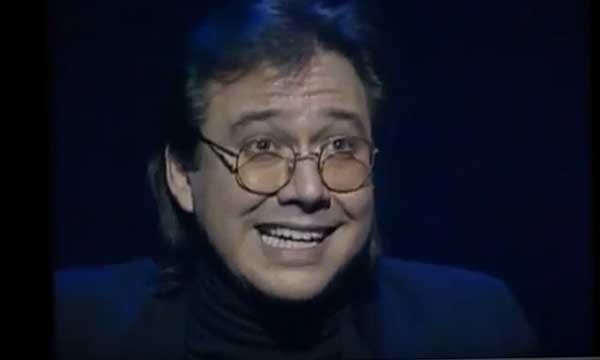 Bill Hicks: the grimace that shook the world.

Today, a young man on acid…

Filmed in Montreal, Quebec at the Centaur Theater for the Just For Laughs Comedy Festival (from his dialogue, we presume he did a few nights here), Hicks unleashes his firebrand social commentary on a generally staid audience – if they’re here for a few nights, it means they’re probably burned out on comedy in general, and being less rowdy than American audiences, we miss the riotous reaction we’ve come to expect from super-comedians and super-applause-signs.

Nonetheless, RELENTLESS is one of Hicks’s finest moments immortalized in amber. His untimely death in 1994 (pancreatic cancer) meant this second album/DVD of material was his last (not counting the inevitable posthumous releases). This live presentation is slightly different in running order from the album of the same name.

The show opens with a pastiche of Hendrix’s Purple Haze. After a few minutes of verbal noodling, Hicks drags us screaming into his unholy embrace. He does it so artfully, we don’t realize when the dissection begins; before long, we realize we are, in fact, listening to a prophet in the vein of Carlin, Stanhope, CK and Rock.

A heavy smoker (he’s “up to two lighters a day”), Hicks chastises people who give shit to smokers, reminding us: “non-smokers die every day.” I don’t smoke, never have, but I can equate his frustration with the drinking-and-driving pushers. I’ve grown sick of the notion that if you drink and drive you’ll automatically kill someone. Like Bill, I got news for these people: sober drivers kill people all the time.

Still, his smoking would take him to that big nothingness in the ground. So his self-effacing stance on his own views is a lucky mitigation. He’s well-aware he might die from it, but just doesn’t want the unspoken derision that comes with it. He was speaking at a time when smokers were just starting to be ostracized from their places of employment for those few minutes of carcinogen lung-butter; we’d see them skulking behind their office buildings or on pub decks, looking like itching junkies congregating in corners to ply their addiction, which was starting to seem more anti-social than social – its original selling point in the 50s and 60s.

There’s a great callback bit about Yul Brynner’s cue ball noggin, and the girls who would sit on it every night. There’s gallows humor about him being totally wrong about smoking, and turning up in five years with a tracheotomy – a bit that Denis Leary would turn into Tracheotomy Man just a year later in NO CURE FOR CANCER (1993). 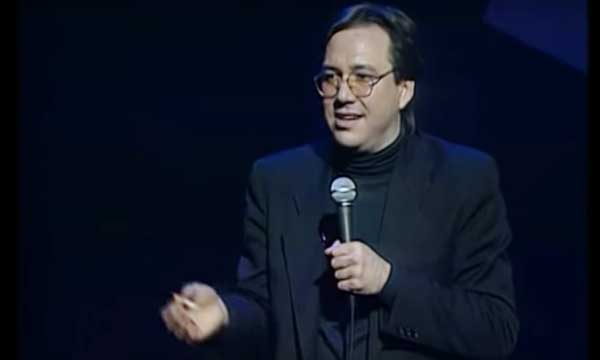 Bill hates Satan, because when Satan speaks, everyone listens.

Garbed in all-black, turtleneck and jacket, Hicks’s relentless passion bleeds off the stage; the screaming is almost Kinison-like although he’s not using it for every punchline, only when the crescendo in emotion demands it. The audio engineers must hate him, as he spikes the level many times with his sudden volume, and then salaciously distorts his audio by getting right up on top of the mic to make his Satan noises, which will send shivers up your spine. Because that’s how Satan really sounds.

Intolerant of ignorance and idiots, Hicks might come off as leftist in this modern age, but he was against anyone or any leaning that promulgated stupidity. One of the cases that led to the creation of the PMRC – two boys who committed suicide after listening to Judas Priest records – sparks ranting about “two less gas station attendants in the world.” He’s right. In Hicks’s summation, there was no cure for cancer coming from two idiots who would take their lives after listening to Priest—Heeey, Denis, nice title for a Special, no?

Hicks didn’t suffer fools, so you can imagine his take on the president at the time, George H.W. Bush, and his own “Iraq War” (seems the Ku Bush Klan loves to prosecute wars with Iraq, as soon as they gain control of the levers of government necessary to do so).

And it was Hicks who, way back then, alerted me to the paradoxical idiocy of “A lot of Christians wear crosses around their necks. Do you think when Jesus comes back he ever wants to see a fucking cross?” Also giving us ammunition to fight back against the hordes of Methuselah when they come to nail you to their wood, “Hey buddy, we’re Christians! We don’t like what you said!”

“Well then, forgive me.”

Noting the depravity of “news” broadcasts that only focus on the negative, Hicks launches into his prime message of hope:

Just once, I’d like to hear a positive LSD story: Today, a young man on acid realized that all matter is energy condensed to a slow vibration; that we are all one consciousness, experiencing itself subjectively. There is no such thing as death, life is only a dream, and we are the imagination of ourselves… Here’s Tom with the weather.

As the applause breaks over him, one last overarching positive message from this harbinger of doom: shining out above him, a picture of the globe from space, that famous Earth shot taken by Apollo – we are all one consciousness, experiencing itself subjectively. Hicks makes a point to indicate it as he walks out under it.

No one heard his message. No one ever will.

I first became aware of Bill Hicks in Australia, with the release of the 1988 video COMEDY’S DIRTIEST DOZEN (in which Chris Rock was the worst comedian, and Tim Allen was one of the best – yes, it was truly upside-down, and not just because it was Australia). Hicks was such a standout, my roommate and I would quote his lines for years afterward. The host introduced him as “a comic, a poet, a revolutionary.” His one bit here yearning for “a positive news story about a young man on acid” proves him worthy of those epithets. He ends RELENTLESS with that bit.