For Moron Eyes Only.

Billy Madison is the type of mungo film experience that leaves one speechless on how a film of this lowbrow nature could ever have been greenlit. The answer, of course, is because that champion of dullards was involved – Adam Sandler, playing the eponymous Billy Madison with every ounce of talent the christian god forgot to give him. A fine businessman he is; a writer and comedian he’s not. 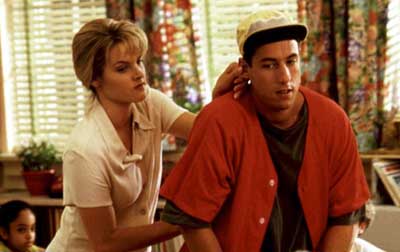 Acting Students: Note how Mr. Sandler poignantly imbues this scene with a fascinating spectrum of emotion.

In order to inherit his father’s hotel empire, twenty-something idiot-boy, Billy Madison must promise his father (Darren McGavin) that he’ll repeat grades 1 through 12 in six months and graduate, or the empire will fall to a business acquaintance (Bradley Whitford).

We discover Billy can’t even spell “rock.” How then are we expected to believe this imbecile who fills his days with “daiquiris, stroke mags and Nintendo” can accomplish his task in six months?

About now the speechlessness starts. This is not an underprivileged person deprived of getting the breaks and so therefore failing at life – Billy is an enabled douchebag whose father paid off teachers to pass him and who refused to educate himself, until his inheritance was at stake, at which point he suddenly wants to turn over a new leaf only to inherit the riches.

This is not a likeable guy. He is neither hero nor anti-hero. He is a waste of space. And the directionless movie can’t even make up its mind on how to portray him, because even though it disparages higher learning at every turn, the disparagement is in direct opposition to the plot of the movie itself, where Billy needs to graduate, i.e. display that he has learned, in order to claim his inheritance.

And the smokin’ blond first grade teacher (Bridgette Wilson) – instead of considering him the illiterate moron he is for trying to pass first grade – falls for him. Well, we all know she’s attracted to a multi-billionaire’s son for his great personality, right?

Directed half-heartedly by Tamra Davis, from an unfunny script by Tim Herlihy and Sandler (Herlihy would go on to write all Sandler’s “comedies” until 2002), Billy moves up through the grades via a montage, not actually doing tests or learning anything, but through attending camp, playing basketball, writing derogatory notes about the ugliness of his fourth grade teacher and having lice exams.

Is it even worthwhile wasting my server space on this review, or you frying your braincells reading it, or Adam Sandler pretending to act in it?

The answer is no.