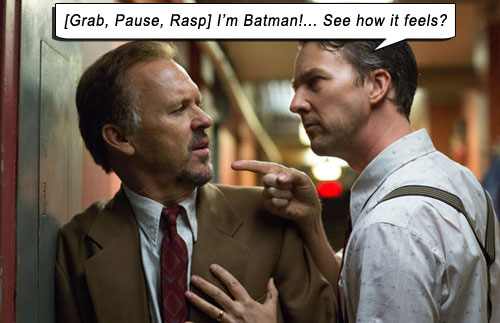 And did you get what you wanted from this life, even so?
I did.
And what did you want?
To call myself beloved, to feel myself
beloved on the earth.
— Raymond Carver, “Late Fragment” (opening titles to BIRDMAN)

BIRDMAN exists in a surreal modernism that is wholly self-aware of its connection to reality, reveling in its analogs and satirical digs at Icarus, the Phoenix, superhero culture, and the faux-import of capitalistic success and social media, so us dopey reviewers are not scoring any points by calling down these puns or punchlines as if they were missed gems. Matter of fact, BIRDMAN is also aware of us dopey reviewers hunching here in the fluttering dark, and our proclivity of puling inanities through our poison pens whilst vicariously feeding off the very subjects of our caterwauling.

Get out of our heads, BIRDMAN! 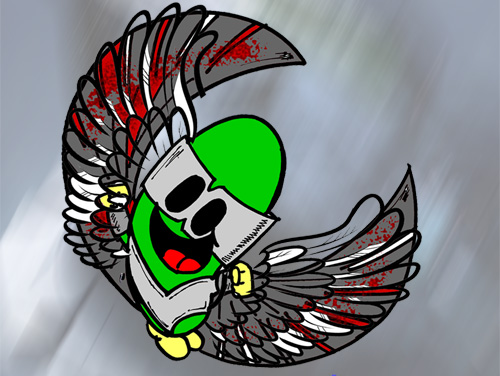 BIRDMAN is, if not a game-changer, one of those films that comes along once in a long while that rattles the cages of cinema. CITIZEN KANE, 2001: A SPACE ODYSSEY, THE BLAIR WITCH PROJECT, PULP FICTION come to mind: movies that marry movie-making technology to the pulse of culture, swirl it in a stream of stars, then supernova the blackness just when we thought it was too safe to go to the movies.

Get out of our heads, BIRDMAN! 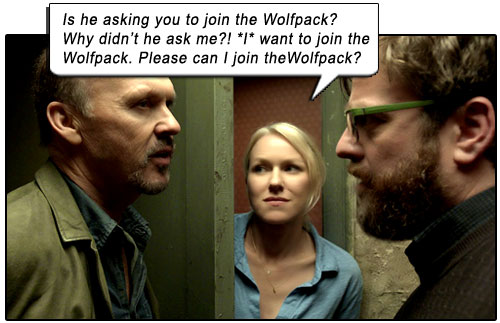 Apparently it makes no difference to Keaton himself that he is playing this character so close to the real life bone. It’s just a coincidence, and just another role to him – as BATMAN was. It’s people that draw the connections between real and reel life, and create the false perception of “comeback.” One person’s opinion, one review, one retweeted twit, can make all the difference – and even this element is portrayed in the movie, both in a vindictive New York theatre critic (her column denotes whether plays live or die), and Riggan’s sudden YouTube fame, which is brought about not by achievement or virtuosity, but by being accidentally outside in his undies and having to “speed walk” through Times Square to get to the theater. Caught on film. Posted. 300,000 views. Fame. And here he was trying to write, direct and star in a Broadway play, wondering how to ever reach the masses to promote his serious stab at art. It’s an ironic indictment on our utterly pathetic, intellectually dismantled culture – and the funniest thing you will see in film this year. (Just the fact that he “speed-walks” instead of runs or tries to cower in his nakedness. Kills me.)

Yes, BIRDMAN is a comedy. Black. Cynical. Honest. Directed and co-written by Alejandro González Iñárritu (BABEL, BIUTIFUL), it is old school filmmaking done with new school tools. Willfully staged like a play with one roving camera, plot centers around a stage adaptation of Raymond Carver’s What We Talk About When We Talk About Love. A play within a play, ambitiously crafted to look like one long unbroken take. Of course, it’s not. And if you possess a modicum of filmmaking dialect, you’ll see where Iñárritu inserts his clandestine cuts. Yet even if the ebullience of one unbroken 119-minute take cannot be achieved in reality, all the individual scenes are actually one take each. Long, flowing, dialogue-driven masterpieces of momentum, unbroken with cutaways or inserts, wonderfully blocked, meticulously planned (the long walks down winding corridors to various rooms are a planning nightmare all their own). In other words, it’s awesome – in the true sense of the word: inspiring awe.

Emma Stone (THE AMAZING SPIDER-MAN) is Riggan’s cynical daughter, his ex-wife is stolid Amy Ryan (JACK GOES BOATING), his girlfriend, Andrea Riseborough (OBLIVION) (klaxons!–lesbian makeout scene!). His stage starlet is luminous Naomi Watts (MOVIE 43), his ruffled producer/lawyer, Zach Galifianakis (playing it straight, yet funnier than in HANGOVER PART 3). Star of the play is Actor’s Actor Edward Norton (THE GRAND BUDAPEST HOTEL) – even in this movie, playing an Actor’s Actor – creating his own Method reality for himself (for his drinking scenes, he’s got real gin; for his sex scenes, he’s got real wood…).

Throughout, Riggan doubts. He doubts his talent, his cast, his finances, his future, his loved ones, his legacy, and wedging a chisel under each of those doubts, the Birdman himself – a raspy voice in Riggan’s head, a regretful specter clinging to past glories, cajoling him to greatness or self-destruction, we can never quite tell: “We had it all – we gave it away! We handed these posers the keys to the kingdom…” During these interludes, Riggan finds he can move objects with a gesture, smashing glasses against the wall, overthrowing furniture (“They don’t know what you’re capable of!”)… Is he really telekinetic? 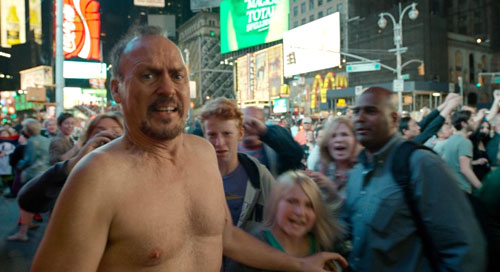 That face. Kills me.

To the external world, Riggan maintains he is not in the least regretful of abandoning his tentpole character. (They ask, “Why would someone who plays the lead in a comicbook franchise adapt a Raymond Carver play?” They try to vocalize their astonishment at art for art’s sake with obscure quotes from supposedly learned sources, only serving to broadcast their faux-erudition rather than identify the artist’s drive. Then there are those who simply ask, “Is it true you inject yourself with pig semen?”) But his inner Birdman constantly surfaces (an uncredited Benjamin Kanes in full costume – for the duration, I thought it was Keaton under the mask – look at that distinctive Keaton-esque lip structure!), reminding Riggan he “needs” Birdman as much as Birdman needs him, for continued survival in the hearts and minds of the fickle populace that pay his salary, “a sad overactor grasping at the last vestiges of his career…”

There are a couple of interludes where the film cannot sustain its energy – when Norton is chatting up Stone. Mike the Actor cultivating Riggan’s cynical daughter, floundering in her “worldly” effluvium that only showbiz brats seem to exhibit (to whit: Jaden Smith). These scenes detract from the film’s momentum, that Keaton drives effortlessly when he is onscreen.

We see a meteor across the sky. An obvious metaphor, yes. An indictment on our shallow dying culture and its latest fad. There may also be a meta-indictment of the way we “need” the escapism of superheroes when we ourselves are so impotent. I’m not sure, I’m still recovering…

Stay in our heads, BIRDMAN!