The Bitch Of A Nation.

To us, Mr. Griffith was the movie industry. It had been born in his head.
— Lillian Gish, actress.

I’m not a film scholar, but does watching this movie make me one?… 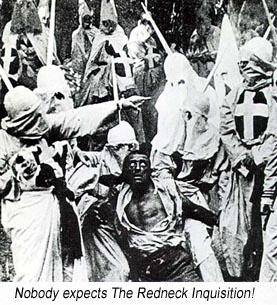 Back when there was no internet or breast augs or Conan O’Brien, people got their entertainment by watching the first moving pictures. D.W. Griffiths‘s THE BIRTH OF A NATION is one such “movie.” Nearly a century after its release (1915) it stands today on the horns of a grand dichotomy: that of being a pioneering film – and a racist piece of shit.

The movie is old and crackly and dated and hard to find. But I’d urge anyone who calls themselves Amuurican to try to get a look at it. Because those who don’t know their history are doomed to Republican it.

Griffiths lifted the story from a play and a novel, both written by white supremacist and reverend (no contradiction there!) Thomas F. Dixon Jr. – The Clansman and The Leopard’s Spots.

THE BIRTH OF A NATION comes in two segments, the first dealing with the friendship between a family from the North and a family from the South, and how the Civil War forces them to take opposing sides; the tragedy reaches its zenith when both families’ sons meet bayonet to bayonet on the battlefield.

The second half of BIRTH deals with Reconstruction – and the magnificence of the Ku Klux Klan in keeping African Americans at bay as they were on the verge of taking over White Civilization. Oh, so we have the Klan to thank that we’re not speaking Ebonics now!

With BIRTH’s historical place in filmdom pretty much unassailable, it is hard to rail against this progenitor of today’s trillion dollar industry. It is a massive achievement – there are epic battle scenes, split screens, process shots, special effects (tinting the filmstock) and cutaways (a brave new technique) – D.W. Griffiths showing the industry the heights that film “making” could scale. On the other hand, whenever a movie promotes hypocrisy, ignorance or wrongheadedness (usually found in romantic comedies, family movies and religious fare – BIRTH actually conjoins all three genres!) the movie rates low, because it misuses a great artistic tool to further idiocy.

And BIRTH’s second half is freakishly hypocritical, provincially ignorant and overwhelmingly wrongheaded.

The movie is not “bad” for being silent; movie is not “bad” for its comical overacting (in their defense, silent actors HAD to act “theatrical,” or the emotion wouldn’t be conveyed; it was a stage play on film, with usually one master shot to play off); it is not even “bad” in its well-worn ideas (which were new back then, I guess), being sarcastic in its description of “War’s peace” and showing a field choked with dead men. And BIRTH boasts many innovations, such as the battlefield long shot of two armies shooting at each other (academically, it is very interesting to see how these scenes were handled; there were no templates except those created by Griffiths himself; SAVING PRIVATE RYAN is over 70 years in the future).

Movie is “bad” because ignorance and hypocritical Christianity are held up as sanctimoniously right. The last frames show the Ku Klux Klan not allowing black people to vote at gunpoint, and then an overlay of Jesus with a fake beard overseeing a town of frolicking people – frolicking WHITE people – a text overlay blurting, “Dare we dream of a day when the Prince of Brotherly Love shall rule.” Uh, rule over just Whitey, of course.

And there are the ambiguous ideas, like the title card, “A mother’s gift for the cause: three sons off to war.” Was Griffiths being sarcastic again? For as we all know, even though humans rail against the inconvenience of death in war, they still glorify the concept of war itself. Look at all the medals they use to pat their own asses. 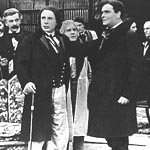 After the Civil War, a subplot grows to fruition – Silas Lynch (George Siegmann), a mulatto (a white guy face-painted in Light Darkie – it just keeps getting worse, don’t it?), starts a black congress, which immediately starts acting like Whitey thinks a black congress would act – boozing and arguing, with their shoeless feet up on the tables, making laws that Whitey should salute them and that they pass the right to intermarry… It’s all patently ridiculous – yet here it is, in a motion picture of the time.

When I heard THE BIRTH OF A NATION was racist, I thought, “How bad can it possibly be?” Well, think of the most racist thing you can think of – say, Rush Limbaugh – and then multiply by the Ku Klux Klan. Add Glenn Beck. Stir.

Admittedly, this view of a black congress is reprehensible, but I’ve seen worse – remember those Shirley Temple movies?! Presaging how the ignint blacks would talk in those Temple movies, this is one of the title cards in BIRTH: “Dem free-niggers f’um de N’of am sho’ crazy.”

Then it gets REALLY racist – as blacks overrun the town, vandalizing and chasing white women in uncontrolled bestial lust (which the sophisticated Christian whites would never do!), and one of the young milky-faced stars from the first half of the film (Henry Walthall, the one they call “Little Colonel” – pertaining to his white manhood, mayhaps?) gets the idea to form the Ku Klux Klan… with white man-hoods…

I found it jarring that all the action takes place in rooms with a door on the left side of the screen and a door on the right, characters hastily exiting and entering like Kramer, with clearly nothing on the outsides of the doors.

Consequently made every interior look uninviting and unlivable.

Then I realized Griffiths was treating the movie frame like a stage, where people enter stage left or stage right; if he really wanted to get fancy, some sets had doors at the back of the room, farthest from the camera. Bonus Kramer points for using them. 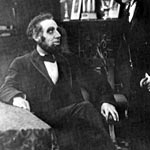 Guy who played Abraham Lincoln (Joseph Henabery) looked pretty authentic – then again, this was so long ago, maybe it was really him! He sits perpetually stony-faced in the one chair facing sideways at his table in his uninviting room (with a door to screen right).

Black soldier Gus (Walter Long – another white guy in blackface) pursues one of the virginal white chicks until she jumps off a cliff rather than be molested by him (an act which would be echoed decades later by Alice Munro in Michael Mann’s reinterpretation of James Fenimore Cooper’s LAST OF THE MOHICANS – but without the racism).

When Little Colonel’s Klan chapter hears about this, they execute Gus. Thus begins a race war, with whites wailing and gnashing their teeth over the blacks creating a monopoly on power in their society. Just one question: Did that white supremacist reverend asshole set his story on planet Earth? 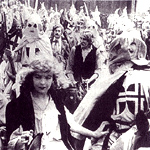 Title card re. the Klan: “The organization that saved the South from the anarchy of black rule!” Yep, Dixon was definitely talking about another planet. In which reality did blacks almost rule America?

And then – the Hero Shots. As the whole town is ransacked by blacks (and white guys in blackface), Little Colonel rounds up Klan members from various chapters and rides thousands strong like the Cavalry coming to the rescue. The Ku Klux Klan is unequivocally the hero – there is no gray area, it IS all black… and uh, white.

These guys are so serious, even their horses are covered in white sheets! No beds were spared! There are literally thousands of white-sheeted Klanfolk, all gutlessly bedecked in their hoods, which in those times were white helmets with long spikes on top – in another of those great scenes that Griffiths sets up, but for the promotion of ignorance! I’ve never seen so much amassed redneck in one place. Except maybe a Larry the Cable Guy show. 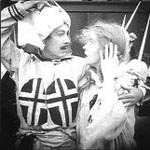 The Klan was apparently dying out at the time of this film, but this movie reinvigorated them. Meaning this piece of fiction refashioned history – by using propaganda as history itself. To people who didn’t know any better, who were truly not sophisticated enough to realize a movie was fiction, it was regarded as reenactment.

And while the Klan come rahdin’ rahdin’ RAHDIN’ like the wind – source music is Wagner’s Flight of The Valkyries. (The same piece would be used by Coppolla 64 years later for his Huey convoy in APOCALYPSE NOW as they decimate Viet Cong villages. As unequivocal American Heroes.) 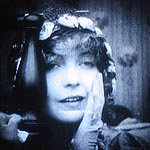 Lillian Gish is probably the only actress worth mentioning here. She plays a girl who at first hated Little Colonel for his involvement with the Klan. But she is not displaying ethics; it is only a character trait so she can arc to loving him when he saves her in his sheet. Also proving the utility of being a Klan member – chicks dig it.

After the rousing parade of Klansmen through cheering city streets, we dissolve to the next election, where we see black people coming out of their homes and being greeted by armed Klansmen on horseback with guns drawn to stop them from voting. In that great American tradition of: One White Man – One Vote.

Think it ain’t so? In 1915, Congress passed a bill requiring new immigrants to take a “literacy test” (that would selectively prohibit many from entering America) – President Woodrow Wilson vetoed it, even though the confused bastard seemed to support the Klan. Up until the 1960s, African-Americans were required to take literacy tests in order to vote – impossible to pass, for anyone, not just blacks. And in 2010, pea-brained bigot Republican Tom Tancredo speechified at bringing back the literacy test…

Title card: “The agony which the South endured that a nation might be born. The plight of war does not end when hostilities cease. This is an historical presentation of the Civil War and Reconstruction period and is not meant to reflect on any race or people of today.”

But it did reflect – on White Man’s guilt!

THE BIRTH OF A NATION is the closest thing to an Emmett Brown time machine; a window not just on how people used to live, but the intellectualism of the time, and also the stunted attitudes of “All men created equal – except black people.”

If this is THE BIRTH OF A NATION, it is no wonder that in 1973, Roe v. Wade legalized abortion.