Melancholia all over ya.

Never has depressing looked so… BIUTIFUL.

If you thought you knew tragedy or heartache or squalor or depression, from the likes of TRAINSPOTTING or ETHAN FROME or SLUMDOG MILLIONAIRE or THE PURSUIT OF HAPPYNESS, Alejandro Gonzalez Inarritu’s gritty film about a small time Spanish thief from the slums of Barcelona, who discovers he has cancer and must try to provide for the care of his two young children before his death will take you to another level of wrist-slash. 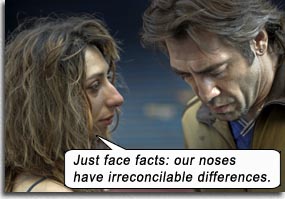 Javier Bardem is Uxbal the thief, who, after discovering he has two months to live, strives for a desperate redemption of his own soul and that of his profligate wife, the mother of his two beloved children.

The fact that Uxbal is a thief is an interesting left turn on the sympathy stakes. Usually the protagonist in a story so unforgiving is a goody-two-shoes, stacking the sympathy deck in their favor. Uxbal is what one would usually term a “bad guy”; he deals in flesh, selling illegal Chinese immigrants to factories for cheap labor; he hustles goods on the street with Senegal illegal immigrants (Cheikh Ndaye and Diaryatou Daff); he pays off police to look the other way. Writer-director Inarritu (and co-writers Nicolas Giacobone and Armando Bo) craft Uxbal as a sensitive, soulful man underneath the criminal measures he has had to take to survive the mean streets and support his kids. And of course, the casting of Bardem doesn’t hurt in the sympathy stakes. Especially with the laydayz…

As so often happens in real life, those family and acquaintances in Uxbal’s orbit exhibit the same directionless stagger with their lives: his brother Tito (Eduard Fernandez) runs a strip club like a lecher, and his wife Marambra (Maricel Alvarez, who is beautiful – for a horse – yet inexplicably “attractive”) is sleeping with his brother, and sneaks out of their home some nights to give “massages.”

It is never explicitly stated, but Uxbal has some measure of psychic ability, and accepts payments grudgingly for telling mourners what they want to hear about departed loved ones. This ability allows him to “see” visions of his dead father – only a boy when he died, so appearing as a boy alongside the grown Uxbal in visions.

Dying a pauper, their father was not even buried in a grave, but housed in a coffin in an unsecured skyscraper plot of coffins, piled high on each other above ground. It’s a horrifying illustration of poverty coupled with overpopulation. And even that high-rise plot is being taken away from Uxbal’s father.

Even in trying to redeem himself by doing good deeds for those he has wronged, Uxbal meets misfortune and misunderstanding. No matter how “beautiful” we might think Uxbal’s soul has become for trying to reconcile with his wife, brother and dead father, it becomes merely a platitude when we consider the fate of his kids (wonderfully natural Hanaa Bouchaib and Guillermo Estrella) after his death. For the saddest cut is that his kids – innocent of sin and innocent of the conditions that led to the poverty they were born into – will be the ultimate victims on two fronts: victims of the man-made social disparity that led to their poverty and indirect victims of Uxbal’s untimely death.

BIUTIFUL is tragedy piled on tragedy, yet is written and directed so elegantly that the grief and sorrow is almost palliated by the artful way that Inarritu frames it.

We have to step back from the insidious poetry of the film to glean the reality: If there’s one thing we should take away from this beautiful movie – it’s that life ain’t biutiful.