In the Name of da Fahder, da Son, and da Hollywood Spirit…

The thing is… you’ve got the wrong Bad Guy.

BLACK MASS is supposedly a tale about “the most violent criminal South Boston has ever known.” But when all the slogans say this, they’re looking at James “Whitey” Bulger. Even whilst adding that Bulger worked hand-in-glove with the corrupt FBI. Therefore, if an institution was advocating for Bulger, if the FBI was protecting him from prosecution, if they were nudging/ suggesting/ sanctioning hits and other felonies on their behalf, then THEY – not Bulger – are the most violent criminals South Boston has ever known. Bulger was just a triggerman.

Let’s establish this point for the social media dummies that comprehend NOTHING and conflate EVERYTHING: I’m not saying Bulger is innocent of anything. Bulger is a sociopathic criminal who ran South Boston’s underworld with an iron fist and a comical accent. He didn’t just kill on FBI orders, but for his own advancement as well. But the FBI has the audacity to classify him under “organized crime” when THEY were the organization endorsing his crime! The brass elephant balls on these rewriters of history!

BLACK MASS aims to pinpoint the people and motivations behind the matrix of collusion that rose up in South Boston in the late ’70s, with Bulger (Johnny Depp, MORTDECAI) at its hub. Movie points the finger directly at FBI agent John Connolly (Joel Edgerton, EXODUS: GODS AND KINGS) for allowing Bulger free reign to run his criminal enterprises without interference. It tells us explicitly that Connolly, Whitey, and Whitey’s senator brother William Bulger (Benedict Cumberbatch, THE IMITATION GAME) shared a blood bond by growing up together on the mean streets of Boston, and that Connolly would abrogate his FBI responsibilities to honor that bond.

Entering into an alliance with Whitey, ostensibly to further his own career, Connolly would take down Italian mob figures that were against Whitey (notably, Angiulo family members), thereby doing Whitey’s work for him. In return for Whitey supplying information about other gangs, Connolly not only turned a blind eye to Whitey’s extortion, drug running and murders, he also actively threw the FBI off Whitey’s trail.

But Whitey didn’t supply any information! All the intel the FBI gained was through other informants and sources, and Connolly was taking those reports and inserting Whitey’s name as a source! Which means Connolly wasn’t even benefitting from the relationship with real intel – thus he was tied to Whitey and his “Winter Hill Gang” purely by that blood bond.

Whitey tells his second, Steve Flemmi (Rory Cochrane, OCULUS), of his “informant” status – but denies it’s actual “informing” (“It’s like an informant – but not an informant”) because in their world, a RAT was the lowest of the low, targeted for whacking no questions. But – as we discover – he truly didn’t do much informing. Which is why this “definition” would become an ongoing contention in the real world case of The U.S. v. James Bulger. 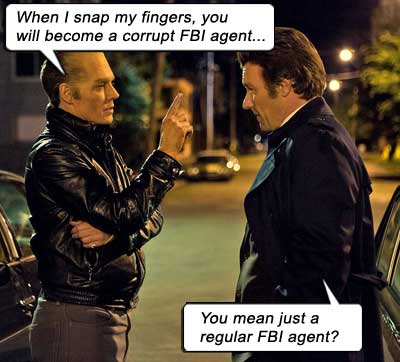 The thing to keep in mind is: This Is Not A True Story. Oh, it might say Based On Real Events – but it’s a Hollywood film. Starring a Hollywood film star, who is cast purely to be liked, to sell tickets. It matters not that Depp’s portrayal of Bulger is chilling and eerie, with his face totally revamped to resemble the Boston kingpin (from his striking blue eyes, to his receding hairline and uneven teeth), he is unequivocally the one we’re rooting for. And we are given ample “rationalization” to root for him because of the “corruption” of this one weak FBI agent.

It’s all a fiction. A throughline created to run this story in understandable, entertaining movie methodology. The reality is too complicated for a blockbuster audience to assimilate in a mere 122 minutes. Take the 2014 documentary WHITEY as an example. Halfway through its 107 minutes, delineating the confusing inter-relationships between the feds and the crims, you throw your hands up and say “Throw ALL these dishonest, dishonorable, unethical, felonious swine into prison and throw away the key!” When it gets to teasing out threads and splitting hairs on who killed who, everyone is accountable, everyone is “criminal”!

FBI superior McGuire (Kevin Bacon, X-MEN: FIRST CLASS) just wants to catch Whitey and get the town dancing again. Along with his second, Fitzpatrick (Adam Scott, PARKS AND RECREATION), he falls victim to Connolly’s misdirection and disinformation. Later, a no-nonsense FBI director Fred Wyshak (Corey Stoll, HOUSE OF CARDS, whom we never see enough of in great roles), will shout at Connolly to get Whitey or else! Whitey’s gang includes Kevin Weeks (Jesse Plemons, the sociopath Todd from BREAKING BAD), John Martorano (W. Earl Brown, TRUE DETECTIVE), and Brian Halloran (a manic Peter Sarsgaard, LOVELACE). Wives of the gang are pretty much treated like dames of the day, dutifully meeting their husbands in the kitchen after they come home from a long day’s mobstering.

Like ARGO, this movie and the 2001 book it was based on (Black Mass: The True Story of an Unholy Alliance Between the FBI and the Irish Mob, by Dick Lehr and Gerard O’Neill) were both created after the fact. That is, regardless of the odd newspaper article that might have mentioned him, no one knew or cared about Bulger while he was active (except the people and families he terrorized, extorted or capped, of course), yet now he is blown out of all proportion as “the most violent whatever.” In retrospect, all the dirty laundry about his collusion with the FBI makes him larger than life – BUT – this story is not something NEW. You know and I know – and it’s such common knowledge that none of us will be whacked for it! – that the FBI is hand-in-fist with felons even as we speak, working the angles on feathering their nests with big busts and promotions and turning blind eyes to murders, prostitution, usury, perjury, GTA, rape, you fucking name it…

Since when is this a revelation that the FBI is corrupt?

Does it occur to anyone that – just like ARGO – we are being a fed a line about the state of crime in whatever city, and that in 20, 30, 50 years’ time, the actual truth will come out – sigh, once again! – of some kingpin that had the FBI or CIA or the President under his thumb? In 1979, the world was told the Canadians diplomatically secured the release of American fugitives from Iran – 33 years later, in ARGO, we learned the truth about Ben Affleck’s beard rescuing them.

Now Whitey Bulger is all the rage. But who will the government be telling us is/was the “most notorious criminal in U.S. history” 30 years from now?

But what about the movie itself? Is it any good? Yeah, the movie’s great – brutal, fast-paced, well-performed and well-directed (by Scott Cooper, CRAZY HEART), with Depp immersing himself in a magnetic performance. An entertaining diversion, a grand mob fiction, like THE GODFATHER or ONCE UPON A TIME IN AMERICA, but how many viewers will believe this is the definitive story of James Bulger and John Connolly? This movie is a biography of Whitey Bulger like STAR WARS is a biography of Darth Vader. With the arrests of Connolly and Bulger (obviously after they had outlived their use for the FBI, excepting their final role of scapegoat), how many think that corruption has finally been eradicated in the FBI? Royt… an’ I got a bridge in Bahston I’d like to sell you people…