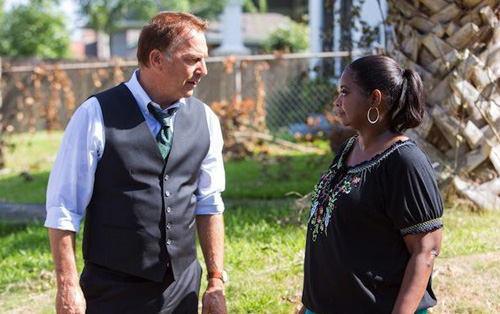 Let me add that everyone in this movie is exemplary, writer-director Mike Binder coaxing performances that soar like eagles; a white grandfather, recently widowed, fighting for custody of his bi-racial granddaughter, against her black grandmother.

Yet if everyone else is an eagle, Kevin Costner is the International Space Station. We cannot wrench our eyes from his onscreen presence.

Costner is Elliot Anderson, a lawyer who has just lost his wife to a car accident, both of them raising their 7-year-old granddaughter Eloise (Jillian Estell), after the death of their daughter during childbirth. Eloise’s deadbeat dad Reggie (Andre Holland) has been AWOL since her birth.

Two families fighting for custody of a child could easily be resolved if both agreed to mutual guardianship. But people are stubborn, and writer Binder exploits that failing in our genes. The stellar, grounded, poignant performances alone could have held up this pat story, but Binder throws in a spanner – junkie father Reggie returns, claiming he’s clean, demanding money from Elliot to disappear forever or join the legal fight on Rowena’s side.

Then there’s the issue of black and white.

Though the movie’s title implies racism is a major theme, when the issue arises – due to the snideness of Rowena’s legal team rather than anyone actually being racist – it is hardly a bombastic clarion call for tolerance. The film actually makes no racial statements, showing by example that race doesn’t matter (making that the indirect statement).

Anthony Mackie (CAPTAIN AMERICA: THE WINTER SOLDIER) is Rowena’s black lawyer brother, Jeremiah, as usual doing a magnificent job as a white guy. Raucous comedian Bill Burr (STAND UP GUYS) seemed miscast at first, but he held his serious ground (with his funniest scene being an indirect stepping away from a keyhole eavesdropping, that will be missed by most viewers). Mpho Koaho (FALLING SKIES: THE ENEMY WITHIN) is Eloise’s autodidactic math tutor and comedy relief. Estell as young Eloise is neither too cute nor too precocious. Paula Newsome plays a young black female judge, uh, judiciously.

The big bad “N-WORD” is thrown down in anger – by Elliot! However, in a courtroom speech that rivals his rhetoric in JFK, Elliot elegantly justifies why he called Reggie a “street nigger” (because that’s how Reggie referred to himself in his texts to Elliot’s daughter, thinking himself streetwise and black-tough). Besides, everyone in that courtroom and in real life would admit freely that Reggie himself was acting like a nigger! That word has transcended racism to a degree and is definitely referring to a “type” – deadbeat, junkie, unreliable, troublemaking, etc. For instance, no one would ever consider calling Mackie’s character a nigger; neither would the term cross our minds in relation to Rowena, or any of her close-knit family. But when we see a loser like Reggie, there’s no better word to describe that guy. Chris Rock – the most vocal racist watchdog – spelled out the difference between “black people” and “niggers” more elegantly than any of Costner’s courtroom speeches, in BRING THE PAIN (1996). Everyone should get that definition straight in their heads before watching BLACK OR WHITE.

I think many would have liked to believe this movie was aiming for something more meaty on the racism front, and were disappointed when Elliot’s speech brought it down to Earth so smoothly. As far as I’m concerned the less said in the “race discussion” the quicker it will disappear. I’ve always maintained: As long as EVERY legal form still has a checkbox for “race,” then race-ISM will exist. Get rid of that box (i.e. STOP RAISING THE FUCKING ISSUE) and it will gradually become irrelevant. BLACK OR WHITE handles it beautifully and goes a long way to making it disappear. (In reality, lawyer Jeremiah would have cut off Elliot before that speech started to soar, but I think he wanted to watch the magnificent acting as well!)

In his first seconds onscreen, we feel Costner, at a level of intensity reserved for third acts: his eyes are red, his face grippingly somber; he is still. He has just received news of his wife’s death. The next few minutes are crucial, as Costner sells us that emptiness of soul in having to face the rest of existence without an integral part of his. That scene of walking into his bedroom after driving home, and staring blankly at the bed; how does anyone face this reality, that the bed remains this empty from now till death? You have me weeping inconsolably five minutes into this film – not because of this man’s tragedy, but in the depth of talent in how Costner is selling it. And we are in the palm of his acting hand, from now till death.

And grand mention to Octavia Spencer, holding her own in the face of Costner’s momentum. Once the go-to black actress for the “Mm-hmm?” face, she has now cemented her gravitas with her Oscar-winning turn in THE HELP and scorchers like FRUITVALE STATION.

Binder’s last directorial effort was just as controlled and contemplative – REIGN OVER ME (2007), making an actor out of Adam Sandler. (Hard to believe this is the same guy who directed Damon Wayans in 1994’s BLANKMAN.)

BLACK OR WHITE would have been a meaningless coaster were it not for Binder imbuing the story with such character “realism” and grounded performances. Elliot’s drinking could have easily tipped into AA stupidity – but doesn’t. Elliot asking Reggie to spell his own daughter’s name (“L – O – E – Z – E, Eloise”) might have turned into a statement on black stereotypes – but doesn’t. And though the female black judge was secured by Jeremiah as a strategic trump card in their corner, she doesn’t automatically lean in their favor just because she’s black and female, but rather displays the unbiased manner that any good judge should purvey. (The only “non-realism” was Rowena constantly speaking in court from behind the “bar” – the railing that separates the “spectator gallery” from the business end of the courtroom. Anything said from behind the bar is irrelevant to the case being prosecuted before the bar, yet Rowena makes defining statements that affect the outcome of the case. Like Mackie allowed Costner to talk, I guess the judge just wanted to see Octavia’s acting.)

And all those racism angles that would usually make us roll our eyes or shift uncomfortably are handled so adroitly we can watch this movie without any fear of tripping and bashing our head on Quentin Tarantino Dead Nigger Storage.