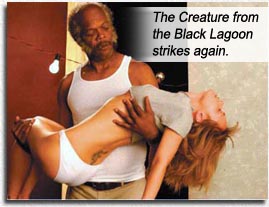 BLACK SNAKE MOAN is almost as confused as its lead character, Rae.

The junkets would have us believe that this southern story (not southern-fried, more like “half-baked”) is about a nympho who is molested and left for dead, then found by old black bluesman, Lazarus (Samuel L. Jackson), who ties her to his house radiator with a heavy chain to “cure her” of her condition. That’s where the press leaves it. (Rightfully so, as most movie buzz these days gives away who did it, how they did it and how many explosions and car stunts it took to do it. Too much information, Studio Marketing Dummies.)

All the scandal and controversy surrounding this picture is hot air. Rae gets all squirmy whenever her boyfriend, Ronnie (Justin Timberlake, playing a weak-willed ponce who cries at the first sign of conflict – basically just playing himself) is not around, tapping the town populace and popping pills profligately. She also drinks – but only when Ronnie is not there to curb her alcoholism and teen lust. But if she only screws around and misbehaves when Ronnie is absent, she’s not really a nympho – she’s just a plain good old-fashioned SLUT.

Does writhing in faux-orgasmic “movie” heat and popping a few pills on a binge night qualify as a technical definition of nymphomania or alcoholism – or are we watching an undiagnosed mental condition that the film-makers are not bothering to explore for the sexy rusted links around Rae’s slim and luscious, sweaty, milk-pale waist?

I think the latter.

In its defense, the film gives Rae a child-abusive backstory, which accounts for her mental unbalance – but then, it should not be considered nymphomania; although, to be fair again, the movie never mentions the word, the only character that alludes to her sexual profligacy calling it an “itch.”

But viewers are gonna call it “nymphomania” anyway. Sells tickets.

Those of us who have had experience with people killing themselves on drugs, alcohol and nymphomania know that Lazarus’s method might curb the immediate drug and alcohol intake, but does nothing to address the mental problems (read as “weakness”) associated with those cravings, or the sociological situation that led her there. And nymphomania will not be curbed at all – it’s internal. And Lazarus’s illegal methodology is quite brazen for someone living in a town where his run-ins with the law were “just for being black and nearby.” But hold on a minute… maybe Tom Cruise is right. Maybe therapy and psychoanalysts and medication aren’t really necessary. All you need to cure mental problems, childhood trauma, financial disparity and white trashiness is a Good Solid Iron Chain.

But the movie’s running time cannot sustain the heat. Lazarus’s gig at a drunken blues soiree, with Rae sensually body-rubbing around the dance-floor in aching sweat (and Jackson doing a reasonable miming guitar job and sporting adequately pained blues vocals), doesn’t so much raise the heat as promise a gang-bang that will never materialize. It gets cold fast down south.

But when Ronnie brings the sexy back, returning to town unexpectedly after being dishonorably discharged, and finds Rae with Lazarus, things get… mildly louder. To find Rae, Ronnie beats the info out of his dishonorable buddy (the last guy to see Rae, who beat her and left her for dead), and all I could think was: It must be embarrassing to take a bitch-beating from Justin Timberlake.

Doe-eyed, taut-breasted Ricci has come a long, lecherous way from Wednesday (way back in the dark ages of 1991’s THE ADDAMS FAMILY); it’s hard to envision her frumpy man-body in THE OPPOSITE OF SEX (1998), or her WASP-syrup smile gracing the cover of PUMPKIN (2002); bikini-waxed so low she might as well be – oh, I guess she is – it’s enough to make any man’s black snake moan.

With a down home soundtrack, a preacher who doesn’t really give us any insight into anything (John Cothran, who brings the “nice” back), a hesitant courting between Lazarus and a pharmacist, Angela (S. Epatha Merkerson, who brings the GOOD TIMES mother look back), and non-sequitur incidents pertaining to Rae’s condition, it’s hard to see this movie as a study in redemption. But I’m sure that’s what Brewer was aiming for, as the final scenes hitch Rae and Ronnie and tell us that everything is now gonna be allllriiiight – once again, a mediocre film preaching that Marriage (after a good, solid chaining) is the panacea for absolutely anything.

During the ceremony, Ronnie gives Rae – in an almost interesting twist – a slut belly chain instead of a ring. Now that’s bringing the sexy back.