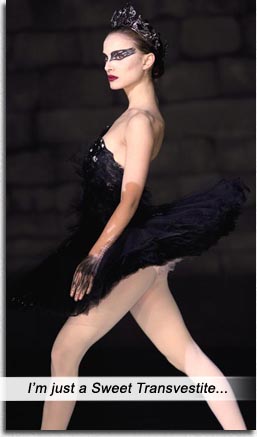 But here’s the rub: this film’s actual director, Darren Aronofsky – pulls off the ballet director’s boast! BLACK SWAN is not only an edgy psychodrama, it actually makes ballet watchable! Aronofsky achieves this by following the same formula he employed in his own THE WRESTLER (2009): he makes his lead live the part – as Mickey Rourke did all his own wrestling, Portman does all her own tippy-toe dancing; like WRESTLER, Aronofsky’s Steadicam is in the heart of the action with over-the-shoulder shots the order of the day; like WRESTLER, SWAN follows a conflicted artist at war with herself, obsessively committed to her vocation, which will bring about her own demise.

The theme of Swan Lake is apparently the white swan and the black swan both existing in the same animal and warring for primacy. Of course, the metaphor describes Nina and her paranoid delusions; she’s holding it together by a thread, and if her evil side gets loose, everything gets pear-shaped.

Portman IS this movie. She is raw, sensual, scary, timid, disturbing, a paranoid delusional self-mutilator – you know, your average ballerina. Portman is magnetic; we live every stolen joy with her, every paranoid slight, every jilted insecurity, every perceived failing. This is Portman as we’ve never seen her before: she has always had a knack for making that “worried face” ever since LEON (1994), but here, we are behind her eyes. And that’s a scary place to be when you’re dealing with people in swan costumes. She is harried, browbeaten, insecure, yet obsessive about bringing perfection to her dancing. And that’s another kudo to Portman – she effectively had to become a ballerina for this movie as well, and as boring as that discipline may be, we marvel at her athletic ability in pulling off the tippy-toe tippy-toes. The wanking scenes and lesbo scenes are just gravy!

Nina’s bipolarity stems from her mother, ex-dancer Erica (Barbara Hershey, perfectly cast, looking like an older version of Portman), once a raving beauty, now a discarded ugly duckling who used to be a swan, and a proud, overprotective, mood-swinging wacko (Nina refuses a slice of cake in celebration, so Erica hurls the whole cake in the garbage; Nina attacks her verbally about her ended career, so Erica pecks back about Nina’s neuroses).Mila Kunis is Lily, a rival dancer out to “steal” the lead role of the Black Swan from Nina – but only in Nina’s foggy mind. Winona Ryder is an older dancer who was once the director’s bottom-b, now discarded for fresh meat in the form of Nina’s swan neck.

The director accuses Nina of being stiff and robotic, too controlled, of having no emotion, basically, of being Mitt Romney – while Lilly is such a threat because she is a natural. The best thing about this criticism is that we, as an untrained audience, can see it is true. Portman imbues Nina with a studied frigidity, while Kunis flounces through her dancing as if she was born doing it; later, when Nina cuts loose with fierce sexuality-on-tippy-toes, we see exactly what the director meant. (Unlike movies like EDDIE AND THE CRUISERS (1983), where Eddie cusses out his band for not being “in the pocket,” yet every recorded piece of music they mime to IS in the pocket.)

I cannot say enough about Portman Portman Portman. A jaw-dropping performance! Still… it’s ballet. And Aronofsky probably had to throw in those salacious scenes to keep both her and us naked below the waist. No, I’m not a fan of the twinkle toes (AMADEUS loses potency in its third act when it focuses so much on Mozart’s ballets), but I do appreciate the sensational music that accompanies most ballets and the searing athleticism of the dancers, and level of skill required to flap your arms like a big honking bird for three hours, or wear pants so tight your urethra turns blue. And those dancers are nothing but muscle and sinew. A shot focuses on a tutor’s back as she flutters her arms, and she is pure corded steel, not one ounce of superfluous fat, every muscle a cabled weapon!

Aronofsky knows how to disturb us with images that gouge our emotions: seeing skin blemishes in the mirror that are not there, pulling fingernails off, seeing a shredded leg. The camerawork is studiously crafty, weaving in and out of dancers during routines, tracking around characters dizzyingly, tilts and reveals, bizarre sound effects augmenting Nina’s paranoia. Aronofsky’s over-the-shoulder shots work to great effect when onstage with the dancers; firstly, it involves us in the production intimately – feeling, breathing, brushing up against sweat and bone; and secondly, being amongst the dancers means we thankfully don’t have to watch the ballet from the audience!

BLACK SWAN is black all over, a terrifying hallucinogenic vision of a tortured soul. Ballet used to put me to sleep. Now I’m too scared to go to sleep because I’ll have nightmares about ballet!

An indication of how ballet is looked down upon by society without even realizing it: Ballet dancer David Hallberg performed on THE COLBERT REPORT in Dec 2011. And the biggest cheers erupted when Stephen Colbert himself flounced onstage in black tights and started twinkling his toes in jest around Hallberg. What a mocking display! No matter the exceptional job Hallberg was performing, he must have felt the audience’s unthinking derision through his fake smile. Think about it: would Colbert – or anyone else – ever consider coming onstage and playing air guitar while a rock band is on?