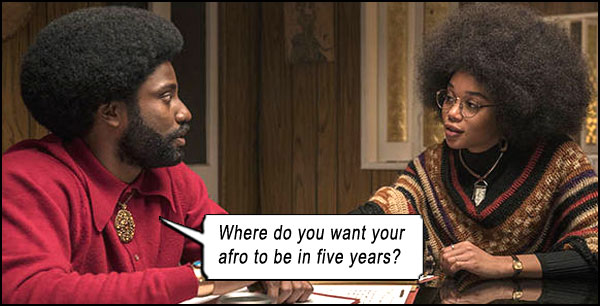 All the scientists who worked in and for Germany in the 1930s lived to regret that they directly helped a sociopath like Hitler harm millions of people. Let us not repeat the same mistakes over and over again.
― Piero Scaruffi, software consultant, lecturer, publisher.

There’s that CHAPPELLE’S SHOW sketch of the blind black Klansman who didn’t know he was black, and upon being told, divorced his wife because “she was a nigger lover.” CHAPPELLE’S SHOW was black comedy at its blackest.

Now comes Spike Lee’s BLACKKKLANSMAN, the story of Ron Stallworth, a black undercover cop in the ‘70s, infiltrating the Ku Klux Klan. Duping the KKK’s Grand Wizard David Duke on the phone as to his color, Stallworth would send in a white emissary (fellow undercover officer Flip Zimmerman) as himself, to befriend the repressed closeted homosexuals and insecure Lonely Guys who identified as the local Klan chapter in Colorado Springs, Colorado, eventually uncovering a bomb plot against a black activist group that led to the deaths and arrest of Klansmen…

And that’s all this movie might have been – a black comedy fancifully exploiting a singular incident from the Klan’s past – if it weren’t for Dumbo Donald. The Russian-puppet 45th fake president of the United States appears in a coda to the film, giving one of his most heinous speeches, just after the “Unite the Right” Nazi rally in Charlottesville Virginia in August 2017, where he claimed there are “very fine people – on both sides.” Cut to David Duke in 2016, praising Dumbo Donald as the KKK’s savior (an honorific that Dumbo Donald has yet to repudiate). This movie is released on the one-year anniversary of that hate rally. And we see real footage of that day’s chaos, as well as the car driven by a white supremacist that ploughed into anti-fascist protestors, killing activist Heather Heyer, and we realize… BLACKKKLANSMAN is not sharing a laugh over America’s guilty past, but alerting us to the fact that the sheets might have gone, but the hoods remain the same. Alerting us to the fact that, just like the movie BIRTH OF A NATION rejuvenated the splintering Klan of 1916, the election of the transparently racist Dumbo Donald one century later worked in exactly the same way, emboldening, enabling and ennobling a new strand of unsheeted Klanfolk to pseudo-bravery and xenophobia misapprehended as patriotism. Opening our eyes to the fact that a White Klansman inhabits the White House.

It takes some big blaxploitation balls to make this film: there is director/co-writer Spike Lee – social justice filmmaker (DO THE RIGHT THING, CROOKLYN, GET ON THE BUS); Ron Stallworth is John David Washington – son of Denzel, who was Spike’s MALCOLM X; one of the producers is Jordan Peele, irreverently exploring blackhood in KEY & PEELE, recently elevated to godhood with GET OUT; and Flip Zimmerman is Adam Driver, well acquainted with the dark side… 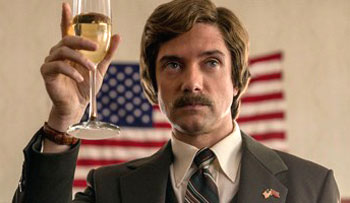 Topher Grace is visually perfect as David Duke, side-parted hair, groomed pornstache and staid demeanor; comporting himself as sensible straight arrow, yet with a fear and ignorance so strident, when a black man hugs him without warning, he screams and recoils as if touched with acid.

Laura Harrier is Patrice, an empowered black female activist whom Stallworth falls for, not telling her he is an undercover cop, because she regards the police as The Man – the nemesis of black culture back in that far-off time of the 1970s; Robert John Burke is the police chief who takes a chance on Stallworth; Ryan Eggold is KKK Walter, one of those “reasonable” types that make first contact with weak-minded civilians, able to turn them with his affability; Jasper Pääkkönen is Felix, the wide-eyed fanatic we envision all KKK dopes to be, looking as angular and sweaty as Michael Biehn in his TERMINATOR days. And at first glance, the cop whom you think is Steve Buscemi in heavy makeup – is actually Steve’s brother Michael Buscemi! Corey Hawkins (Dr. Dre in STRAIGHT OUTTA COMPTON) is a fiery Black Panther leader. And ages-old Harry Belafonte is an elder who ignites black fury in Patrice’s activists. Sunken-eyed Frederick Weller is perfectly cast as a racist cop.

We follow Stallworth and his afro through the boring records department, promoted suddenly to investigative work, and hitting on the idea of contacting an ad placed in a local paper, seeking Klan members, on the off-chance he could do some good keeping the fanatic racist organization under surveillance.

In reality, Stallworth answered the KKK ad by mailing an inquiry to a P.O. Box; here – in cinematic liberty – he just phones them (for our immediate gratification). I presume he must have eventually given the KKK his home phone number in real life, but in Cinematic Liberty Land, Stallworth gives out his desk line at work – which is tactically asinine, as anyone might pick up the phone when he is not at his desk, and would blow his cover.

From the Truth Stranger Than Fiction Dept. the broad strokes of Stallworth’s absolutely non-thought-out plan actually took place: a black man did speak to David Duke, and sent a white man (Zimmerman) in his place to meet the Klan (wearing a wire), who gained the trust of the Klan enough to get initiated into the brotherhood. The movie’s liberties include making Zimmerman a Jew and the foiling of a bomb plot for a Pretty Orange Explosion climax.

Other broad strokes are woven in with dramatic license, so that we cannot tell where reality ends and fiction begins, the movie showing us David Duke himself visiting Colorado Springs for an initiation ceremony, whilst his soldiers simultaneously, surreptitiously carry out the bomb attack – with Stallworth assigned guard duty to David Duke, who was completely unaware that his black bodyguard was the man he thought was a white supremacist on the phone.

Did Duke, Stallworth and Zimmerman come face to face at that initiation ceremony, for dramedy gold? And was Stallworth really tied up so groovily to Patrice? And was her church the one targeted by the KKK on that fateful day? It all seems pretty darn screenplay-neat if you ask me. And was Stallworth – reportedly the first black policeman in the Colorado Springs PD – really utilized to spearhead a kumbaya initiative between the police and the black community? 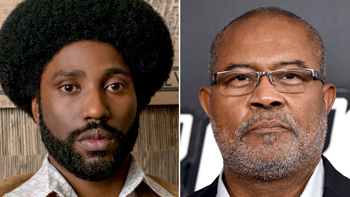 Denzel’s son and Modern Ron. What did Stallworth REALLY do undercover, besides cultivate afros?

Boots Riley, writer-director of the acclaimed SORRY TO BOTHER YOU, takes issue with Spike Lee’s portrayal of Stallworth as an intercedent between the police force and the blacks they love to beat. Patrice even confronts Stallworth in the final scene, on whether he can represent disenfranchised blacks while still being The Man (in dialogue so explicit it’s embarrassing: Patrice: “Are you down for the liberation of black people?” Stallworth: “Power to the people!”). But Stallworth’s role in the community was not so, uh, black and white…

Riley further claims that Stallworth misrepresents himself in his book, Black Klansman, upon which this movie is based. In the book, Stallworth fails to clarify he also spent much of his undercover duty actually working against radical black organizations (such as Patrice’s) to subvert imminent race wars. To be clear, Stallworth’s job was to infiltrate any radical activists, not just the Klan, to discombobulate them from within. This means that the scene where Stallworth visits a Black Panther meeting undercover and reports back to his superiors that it is not worth further surveillance – is a total lie! That’s exactly the kind of radical group he did surveil. So there is much more nuance that could have been woven into the movie to make it more interesting and morally ambiguous, but America runs from nuance faster than a black man from the cops.

It is also a well-publicized fact that Spike Lee was paid $200,000 in 2016 by the New York Police Department as consultant for an ad campaign to unite police and minorities. Lee, a vocal critic of the NYPD, accepted the money. (And see how there’s no more trouble between police and minorities?) Some might say Lee got the better of those he disagreed with by swindling them, whilst others, like Riley, claim that a film like BLACKKLANSMAN, which portrays police in a heavenly light, only shows that Lee has been bought off by the very institution he used to decry.

These criticisms have nothing to do with the quality of the film. Almost like BIRTH OF A NATION, the film-MAKING is stellar, but the message might be mixed, wrong, or, ironically, using the same method of agitprop employed by the KKK to brainwash its constituents. 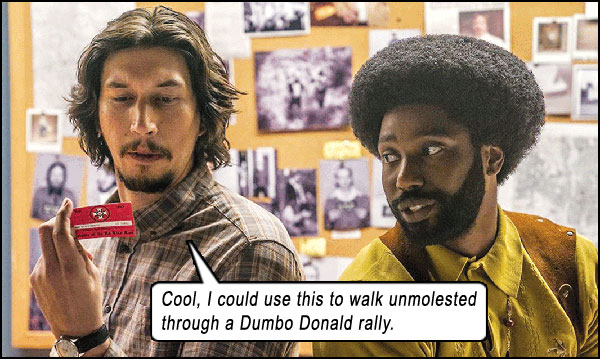 Movie opens with a scene from 1939’s GONE WITH THE WIND, with the racist minstrel song Old Folks At Home transporting us to a time when white people would call the police on black people for walking their dogs, picking up their own kids at school, having a barbecue, or waiting for a friend at Starbucks—wait, that all happened this year… Alec Baldwin makes an ironic cameo as a politician lamenting “living in an era marked by the spread of integration” (ironic because his night gig is playing Dumbo Donald on SNL).

BLACKKKLANSMAN is not like all those “slave” movies unnecessarily bringing up a bygone era; it is a bucket of cold water to the face telling us that era has circled back to trump us.

The real Ron Stallworth still carries his KKK Membership Card as a memento. Or maybe it’s to blend in?