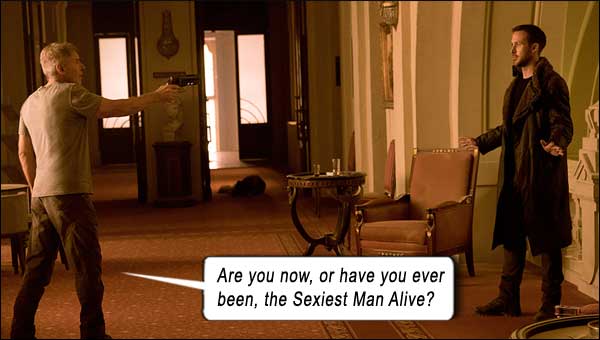 I’m too sexy for my existential crisis.

He’s a BLADE RUNNER in 2049. And he’s a Replicant – a robot that resembles humans. And he hunts older-model Replicants that are not as gorgeous as him. And – unlike the last guy – he’s terrific at his job!

Ryan Gosling is Agent K, a Nexus-9 Replicant, the newest products of the Wallace Company, trusted to the extent that they are embedded in the police units known as blade runners – actually hunting other Replicants. (House niggers of the future!) Unlike the older Replicants with the four-year lifespan, that were implanted with memories and thought they were human, K has an open-ended lifespan, implanted memories and knows he is not human. So do all the other human police, who deride him as a “fucking skin-job” at every opportunity.

We meet K on a particularly tough “retirement” job, against a bodybuilt Replicant (Dave Bautista) who speaks of a “miracle” before his demise.

Before we go any further, note that we are in the first scene of the movie, and already we are so beautifully immersed in futuristic élan, we take it for granted. Like its predecessor, the sights and technologies and concepts are seamlessly woven into BLADE RUNNER 2049: K’s drone, videoing and infrared-scanning the area, K’s hovercar and its interior, the steel-choked city that K flies over to arrive at this desolate farm stretching into the ochre distance… The difference between Ridley Scott’s 1982 BLADE RUNNER and this movie is that we expect to see seamless wondrous efx shots. Yet it’s not bombastic efx for the sake of impressing the children of JUPITER ASCENDING or VALERIAN. To their credit, the production designers and art department have done Ridley Scott proud,  keeping this whole production looking uniquely BLADE RUNNER, capturing not only the synthetic feel of the atmosphere in a dreary rain-drenched Los Angeles overrun by corporate ads, but the visceral tone of the first film, a cerebral orgasmatron of wired teeth and leather fists. 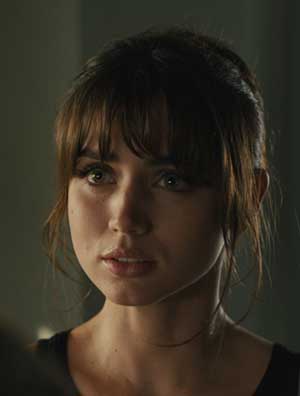 “Tell me how my lips may be of service to you? Honestly, I have no idea.”

And there is something more. Screenwriters Hampton Fancher and Michael Green, with director Denis Villenueve, have meshed their visually intense experience with a level of anxiety and claustrophobia that borders on true horror movie eeriness. A sense of dread pervades almost every scene, not the usual action movie suspense of bad guys versus good guys, but that ominous feeling you get when the hand under your bed is about to grab your leg.

So it is this dread that creeps up our spines when K unearths a secret box of bones on Bautista’s farm. Just what the—?

Back at base, after any disturbing mission, K undergoes the strident “baseline test” Whereas the original movie’s Voight-Kampff test was a relaxed series of questions to determine lack of empathy in a Replicant, in this movie the mind-intrusive process is to ensure the Replicant has not gained empathy; now a rigorous, clinical process of anxiety-inducing questions shotgunned at you.

Severe Lieutenant Joshi (Robin Penn) informs K the bones belong to Rachael – a Replicant who fled in 2019 with Blade Runner Deckard (Harrison Ford)! And she – died in childbirth. Bautista’s words come back to haunt K, “Because you’ve never seen a miracle!” He was referring to the child born of a Replicant. But this means she wasn’t a Replicant – she was a Repli-CAN. (Somebody slap me.)

Joshi orders K to find the child and “retire” it – before the public becomes aware that Replicants can give birth. The Earth is already a cluttered wasteland of the unfortunate lower classes who couldn’t afford to relocate off-world, and the panic of discovering that Replicants were blurring the lines between themselves and humans would devastate what remained of civilization, causing people to buy up all the toilet paper. Studies show this is how civilization falls…

Joshi asks K what would happen if she finished the bottle of whiskey they were sharing… Amazingly, K turns down Robin Wright’s hardbody – in favor of a softbody he has at home by the name of Joi (Ana de Armas – those lips!).

An A.I. hologram girlfriend that cooks, cleans and caresses (and might even be prettier than Ryan Gosling), Joi lays down a translucent steak dinner over K’s unappetizing sludge. Her existence depends on a wall panel and projection arms, so when K gifts her an “emanator,” it’s actually for him – a remote box that allows her to travel outside the tyranny of line of sight of her projector, so K can download her and take Joi anywhere…. (By the way, thank you to the writers for solving the girlfriend problem, which is not about turning them ON, but turning them OFF – when a call or text comes through, Joi freezes like a video being paused, so that K can read or answer his hologram messages. Wallace Company, you’ve sold me! Have one delivered to my home address, please.) 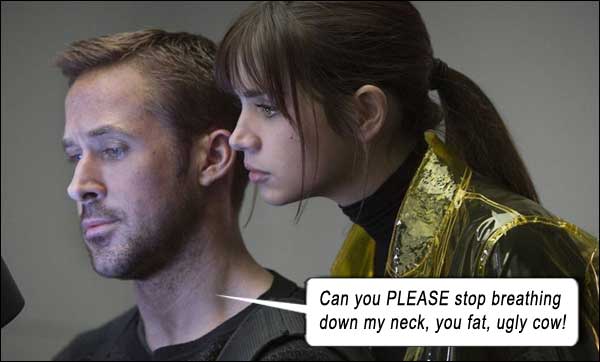 BLADE RUNNER 2049 cannot be digested by virgins. There is too much connective tissue with the cyberpunk original for a newbie or a forgetful veteran to appreciate. Thus I urge all Movie Maniacs – newbies and veterans alike – to watch BLADE RUNNER before immersing yourselves in the almost-superior BLADE RUNNER 2049. After all, it’s been 35 years. And a lot of implanted memories will be reinforced or proven fake when you renew your baseline. The smallest details of this film will jigsaw into place for you. You can thank me later.

K, though not human, has reservations about his mission: “I’ve never retired something that was born before.” Joshi: “What’s the difference?” K: “To be born is to have a soul, I guess.” (So the superstition of religion made it to 2049. And they implanted this stupidity/ignorance into their best model robots?! Wallace Company, make sure you keep that shit outa my sex doll.)

So begins K’s quest to hunt down the child of Deckard and Rachael. But clues leading to Deckard also lead K to the discovery that his memories were not implants, but real. A tiny wooden horse features in the most eerie throughline of the movie – truly, these sequences are horror-movie worthy – further confusing K, who visits the Memory Maker (Carla Juri), determined to dispel his fears, but she discombobulates him even more by acting too much like Amanda Plummer.

Joshi tells K he is “miles off his baseline.”

In this movie, the twist is in the blade runner himself: whereas Deckard was a human that suspected he might be Replicant, K is a Replicant that suspects he might be human. Not just any human – the child of a Replicant and a human – the child of Deckard! (That’s about right – Ryan Gosling’s face and abs are so perfect, he could only be a manufactured robot – or spawned by the Sexiest Man Alive 1998!)

The plot thickens: Corporate Wallace himself (Jared Leto, blind, with a hovering armada of eye-drones) is on his own quest to create a Replicant that can give birth, to accrue an army of Replicant slaves – or at least, that’s what I get from all his nebulous, faux-intellectual ramblings. His go-fer is a Nexus-8 Replicant named Luv (Sylvia Hoeks), whom he unleashes to track down Deckard and the child…

Hmm, Luv and Joi. Too clever-clever? Luv is pursuing K, trying to wipe out his Joi. He must get his hands around the throat of Luv to drown her in a sinking car. Is it just me reading this subtext, fellas? 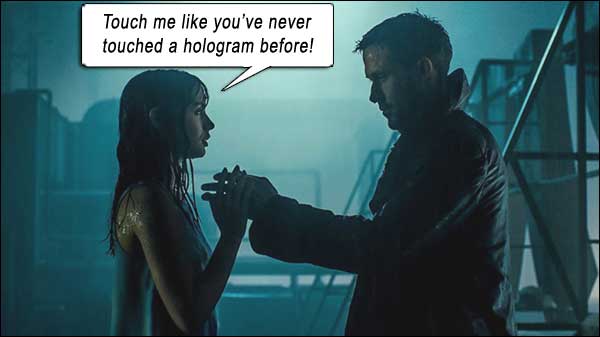 Composers Benjamin Wallfisch (IT 2017) and Hans Zimmer (DUNKIRK) take their cues from the original’s Vangelis synth soundtrack to forge a “futuristic” sound design, at times raucous, disorienting and ear-splitting—[record scratch]—Where the hell is Harrison Ford?! Ah yes, the candy trailers sold you on Ryan and Harrison frolicking together in an orange froyo bedazzle – but Ford only appears late in the story as a very expensive McGuffin. Harrison’s smooth velvet slides out of the orange-black, pointing that gun at Ryan, bringing with him a much-needed ironic comedy relief.

Mackenzie Davis (how serendipitous that she’s a cross between Sean Young and Daryl Hannah) is a hooker that Joi hires for K, in a sad sequence where she tries to scratch K’s unscratchable itch, meshing her perfect beauty with the prostitute’s filthy booty – like sex with 3D glasses on.

And there’s even Barkhad Abdi (from CAPTAIN PHILIPS “I’m the captain now!”).

And we might THINK Sean Young cameos as Rachael… BUT… unbelievable as it sounds, that’s a CGI rendition! Yes, our real world version of a Replicant! (And Young had to be credited in the movie – because she is – SO – FUCKING – REAL!)

A Replicant freedom fighter tells K: “If a baby can come from one of us – we are our own masters.” Mackenzie echoes the original movie’s slogan: “More human than human.” Because “dying for the right cause is the most human thing we can do.”

Thus exposing the flaw in Wallace’s Grand Plan: he wants Replicants to reproduce for him “to populate a million worlds” as slaves. But how does he plan to police those slaves? Because if the Replicant freedom fighters have their way, they’d reproduce to amass an army against him and the humans. And even if “his” Replicants reach that million-world stage, they’d resort to the “rights and freedoms” stage quicksmart. Like every Darth and Caesar and Fuhrer and Dumbo Donald before him, Wallace’s desire outpaces his reality. 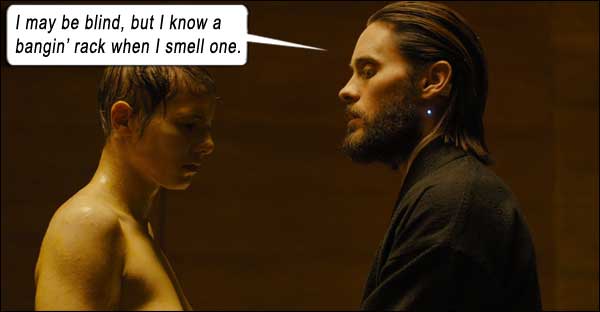 Director Villeneuve, known for his controlled, solemn filmmaking style (SICARIO, ARRIVAL 2016), along with his cinematographer, production designers and art directors, assault us with sights and sounds and emotions; twists of plot, dynamic performances shrouded in somberness, and creative credible fight scenes where we can witness K being terrific at his job.

In the scene where Wallace confronts Deckard, with the shadows of the surrounding pool cascading off the roof and walls, the LIGHTING keeps changing, seemingly in real time (meaning it’s a practical effect!), from heavy orange fading to gray, then black, then slowly back to stark raving orange again; this cycles during an unbroken take and is amazing for its continuity challenges!

We do not realize it as it progresses, but after we dismount, we realize that watching this movie is like riding a unicorn. Because everyone involved with the making of this movie – like K – is terrific at their jobs!