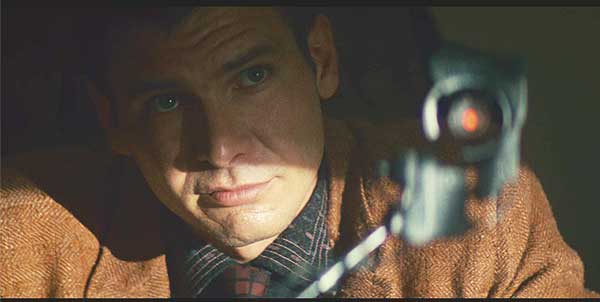 Are you now, or have you ever been, People Magazine’s Sexiest Man Alive?

He’s a BLADE RUNNER. He hunts Replicants – robots that resemble humans. And he’s terrible at his job.

Deckard (Harrison Ford) is regarded as the indomitable hero of BLADE RUNNER, especially since his captain (M. Emmett Walsh) pulls him out of retirement to do a job that his best officer failed at doing – “retire” four Replicants illegally in the city.

But re-watch this movie with an objective eye, and discover that this supposed hard guy – considered the best “Blade Runner” by his police captain – should have been dead meat at the hands of almost every one of his robot victims, if it weren’t for the intervention of others or the haphazard manner the robots toyed with their prey.

Yes, Deckard is the hero, and every hero must necessarily be brought low to rise again (the Hero’s Journey) but Deckard does not go through any existential crisis when he is beaten by the robots – no, he is beaten in a simplistic way at each robot interaction, until some intervention occurs that allows him to triumph. In the Philip K. Dick novel (Do Androids Dream Of Electric Sheep?), from which this movie lifts many ideas and discards even more, Deckard does question his expertise, his job, his marriage and his social status at many points, but screenwriters Hampton Fancher and David Webb Peoples straightened out the complexities of the novel, which allowed director Ridley Scott to invent cyberpunk…

Geez, they let anyone into this party if they wear a bow tie!

Truly, the world Scott forges from book pages that never describe the mise en scѐne is the real stunning genius of this psychedelic day-mare work of art. Dick is more concerned with the noir detective story integrated with futuristic moral dilemmas; whilst Ridley concerns himself with integrating a simplified detective story into a tapestry of raging visual gluttony. I doubt even Dick would have envisioned what Scott brings to screaming life on the screen. This vision of the future is not so much gorgeous as stifling; everything we see onscreen is “futuristic” – from building facades to room designs, from guns to computers, vehicles and street peripherals – yet run-down, beaten into age; skyscraper-sized holographic ads, flying cars and neon storefronts, tilted tech-noir buildings crowding in on themselves, iron streets dank with steaming rain, filthy rusted alleyways, poverty and huddling food shops; above the chaotic cityscape, factories spew flames as gliding police cars slowly slink through the fog; claustrophobic colors and catastrophic beauty… (If you want to see where Luc Besson stole his vision for THE FIFTH ELEMENT, look no further.)

Nominated for Oscars and winning BAFTAs for Production Design, Art Design and Cinematography, BLADE RUNNER’s scenic impact alone raises it light years above the engine-pit of “futuristic” sci fi actioners of the age, like SOYLENT GREEN, LOGAN’S RUN or ROLLERBALL with their bland plastic élan. Scott had just helmed ALIEN (1979) with the same age-worn, rugged production design, and his art directors and effects mavens here create not just a world, but an environment where Dick’s story would authentically take place.

BLADE RUNNER: THE FINAL CUT (released in 2007) is the director’s vision realized without studio intervention. Not only does it completely excise Harrison Ford’s superfluous voiceover narration, it re-edits the film in subtle ways, to cast doubt on Deckard’s origin. Since this version’s release, Ridley Scott maintains that Deckard is a Replicant. Harrison Ford says he isn’t. And it is our job to discern who has the fake memories…

Only the lower classes are cursed to remain on the abandoned Earth, while most humans of any means have moved off-world with their Replicant aides. After the new Nexus-6 Replicants, impossible to distinguish from humans, rebel in an offworld colony, Replicants are outlawed on Earth. Now four Replicants, led by Nexus-6 “combat model” Roy Batty (Rutger Hauer) have infiltrated Earth, seeking their creator in the Tyrell Corporation, to extend their four-year lifespan – a failsafe mechanism built into them.

Blade Runners use the empathy test known as Voight-Kampff, to identify Replicants, which involves the subject’s cooperation in sitting and taking the test – probably the weak link in the process – as the first Replicant discovered (Brion James as Leon) kills his interrogator when the questions get too revealing.

Deckard is called in, and his boss gives him just a little too much information that he should already know – I mean, does the best Blade Runner need to be told the basics of Replicant behavior? 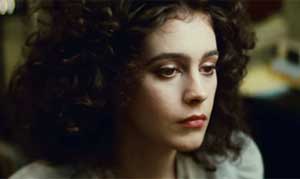 Perfect beauty. What every man wants in a sex doll.

Deckard first visits Tyrell himself (Joe Turkel), who asks Deckard to test his salubrious female assistant Rachael (Sean Young). Deckard unwittingly discovers she is the next step in Replicant development – as Tyrell boasts, “more human than human” – a model with implanted memories, who thinks she is human. And Deckard gets moist. (Distracted by the first pretty robot face he sees. See? Bad at his job.)

Probably the only canny detective work Deckard performs in this movie is to identify a snake scale that leads him to Replicant Zhora (Joanna Cassidy) – a singer who shows him her tits to distract him, then beats him down (see? bad at his job). Why she leaves him alive is conjecture, but it allows him the chance to shoot her in the back, in one of the film’s iconic scenes – the “woman” in the transparent mac breaking through walls of glass as she falls. (I quote “woman” because in the Theatrical release, it is clearly a man-dancer with stubble who takes the fall, while FINAL CUT neatly replaces Cassidy’s face onto the stuntman, and somehow edits the fall so as not to look like a man’s muscled arms and legs.)

Leon gets the drop on Deckard and thrashes him like a red-headed step-child (see? bad at his job), and is about to gouge out his eyes — when Rachael shoots Leon in the head. So now he “owes one” to a robot! He tells Rachael if she runs, he won’t come after her. (Man, can this guy get any worse at his job?)

Deckard tracks down the “pleasure model” Pris (Daryl Hannah) who head-locks him in glamour thighs, about to twist his head off (because – refrain: bad at his job), until she simply releases him and goes into an acrobatic routine that allows Deckard to shoot her in the back. This guy is — terrible at his job!

If you gotta go, I can think of worse ways than betwixt shaved thigh.

Firstly, if Deckard was skilled at all in surveillance, he wouldn’t let the robots get the drop on him; secondly, if he is grabbed (which is, let’s face it, all the time, because, yeh, bad at job), he has no particular set of skills to extricate himself from their superhuman grasp. So no evasive skills and no defensive skills; his one resort is to stand there and get bitchbeaten.

Maybe this guy should get a desk job?

Ultimately he must meet the Aryan-blond, sinister, muscular Roy Batty, who we’ve followed as he tracked down Tyrell only to discover that nothing can be done to extend his life. So he’s in a mood when Deckard confronts him. In an eccentric game of cat and mouse, Batty breaks two of Deckard’s fingers (sigh, need I say it again?), then toys with Deckard as he beats on him (and again?), Deckard finding himself hanging from a ledge (what a surprise!) from his two broken fingers, which he cannot maintain – so let’s himself drop! (sooo bad at his job!) — only to have Batty save him by grabbing his arm and bodily lifting him to safety.

Let’s face it: no matter the eye-warping production design and ominous techno-glaze soundtrack by Vangelis, no matter the visionary thrust of the mise en scѐne, which is the singular driving factor that leans this movie into immortality, Deckard should have been dead ten times over by this point…

Velvet-voiced Harrison Ford was a supernova at this time – hot off THE EMPIRE STRIKES BACK and RAIDERS OF THE LOST ARK. So we took his primacy for granted, but this story really made him look quite… impotent. Until he forced himself on Rachael – in a dominant-submissive scenario that would make twitter crap its vagina in this gutless pc age. On the other hand, this movie put the striking Dutchman Rutger Hauer on the American map with his wild-eyed power performance; Sean Young in her first leading role, and Edward James Olmos tooling around the middle-background as a snarky, icy-eyed deputy monitoring Deckard’s kills.

During Batty’s final monologue, Deckard is a helpless lamb, driving rain streaming down his aghast face, simply gazing wordlessly at Batty, who has learned his quest for longer life was futile, and so let’s his engine run down in a flush of introspection: “I’ve seen things you people wouldn’t believe. Attack ships on fire off the shoulder of Orion. I watched C-beams glitter in the dark near the Tannhauser gate. All those moments will be lost in time… like tears in rain… Time to die.”

Deckard looks sad, introspective himself, as the rain belts down his face. With no narration in this FINAL CUT, we are open to speculate on the allegories and metaphors of the final battle: When his hand involuntarily clenched on itself, Batty drives a nail through it to keep it open — Jesus? Intimating he is the superior, godlike version of man? Batty catching Deckard only after he let go — demonstrating free will? Demonstrating the robot’s HUMANITY? Demonstrating that Deckard is terrible at his job? The dove released at the moment of his death — his soul ascending? Dove signifying he is at peace with himself for his final act? The whole theme of this story – inherent in Dick’s novel and expanded in the movie – is divining that line that makes humans human and robots Replicant. And if a Replicant were to illustrate that it could cross that line, how sinful then were its creators to build it with a less-than-human lifespan? Roy Batty, in his final act, in every way, proved he was more man than Deckard…