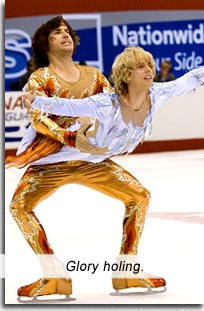 How much gayer can BLADES OF GLORY possibly be? Answer: None more gay.

The words ‘Will Ferrell’ and ‘professional sports’ have no reason to be in the same sentence together. Somehow they keep happening.

In BLADES OF GLORY, Ferrell is ice skating champion Chazz Michael Michaels, whose raunchy routines on the ice earned him the moniker “skating’s outlaw”; Jon Heder is ice skating wonderboy Jimmy MacElroy, whose strict stepfather (William Fichtner) raised him for one purpose – to be a gold medalist. When Jimmy ties Chazz for a gold medal, that isn’t good enough for Jimmy’s dad, who promptly abandons him.

On the medal podium, Jimmy and Chazz publicly brawl and are banned from ice skating forever. But a loophole in the rules (pointed out by their fanatic stalker, Nick Swardson) allows them to compete as a sensual doubles team.

Craig T. Nelson is the boys’ coach, whose dream is to pull off a complicated routine that will either win them the gold – or get them decapitated. Real life married couple Will Arnett and Amy Poehler are the ambiguously incestuous brother and sister ice skating team who stoop to dastardly lengths to defeat Jimmy and Chazz.

BLADES has many funny moments; Ferrell once again shows off his weirdly misshapen body for maximum laughs, he boasts of his “ink” (tattoos reminding him of wild sexual conquests), and he is a practicing sex addict.

Jon Heder (looking pretty as a girl, only with a bigger vagina – sorry, those are his lips) still has only one character in his acting arsenal – the Napoleon Dynamite – and he’s gonna one-trick that pony till menopause.

The final skatedown is a blade runner’s cream dream, as Chazz and Jimmy become one on the rink in a series of maneuvers that would look risqué even if a man and woman were doing them; with Jimmy and Chazz scissoring and sixty-nining, it is positively delightful. If you’re homosexual.

As one commentator says, when asked about the teaming of Chazz and Jimmy, “As if skating wasn’t gay enough already…”