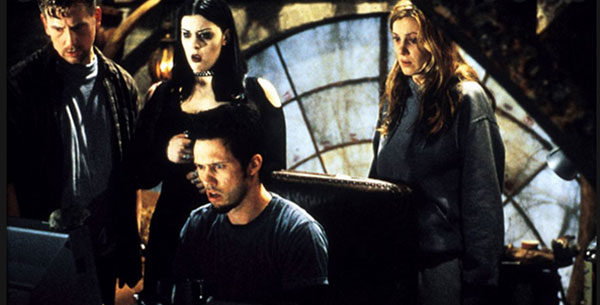 The horror of not saving a document before deleting.

THE BLAIR WITCH PROJECT (1999) was such a phenomenon that its sequel, BOOK OF SHADOWS: BLAIR WITCH 2 could afford to be set “in the real world” and regard that first film as if it was an actual film phenomenon in their world – a world in which everyone from Roger Ebert to MTV’s Kurt Loder are talking about that film.

The five 20-somethings at the center of this dumb plot – retracing the steps of Heather Donahue from the BLAIR WITCH film – live in a world where tourists overwhelm the Burkittsville woods out of curiosity and obsession with the film; where the irritated locals and sheriff try to tell tourists “it was only a movie”; where grifters sell twig figures and piles of rocks, to continue the mystique; where truly the most horrifying thing – is the acting.

Jeffrey Donovan leads this pack of unconvincing day-players into the woods, as a profiteering tour guide. Erica Leerhsen tags along as a supposed “wiccan” (the word that actual witches like to call themselves – although even the terminology “actual witch” is a misnomer, because – no such thing; establishing their bona fides with, “Blessed be” as if that proves they worship Beelzebub). Stephen Barker Turner reads his lines like he’s seeing them for the first time; his girlfriend, Tristine Skyler, suspected of being a witch herself, gives a performance that indicates she’s got either dark powers or mild indigestion. They’re both doing some sort of “supernatural research” themselves – in essence, their own Blair Witch Project (ain’t I quaint?). And Kim Director goes along for the ride because she’s “psychic” or something, garbed like a Goth, but looking like Eddie Izzard. (“Have you got a flag?”)

These five non-entities spend the night in the woods where Heather’s infamous footage was found, and in the morning, discover that all their camera equipment and research notes have been shredded. As Kim Director says, “These things look like they were BITTEN through!” putting so little effort into that line-read, it made me question why she chose acting as her profession. Skyler also experiences a miscarriage, and needs to be taken to a hospital. Which diluted the dread immediately.

I mean, isn’t this the forest from which there is no return? And the gang simply – drives outa there. Gone is that claustrophobia of being trapped in some dimension that won’t loose its grip. Onto the hospital and then onto Jeff’s house in the woods (a veritable warehouse/mansion with multiple levels, just for the sake of getting people alone in their respective spaces), where strange occurrences make everyone doubt their sanity, in the end supposedly succumbing to what we presume to be the Blair Witch curse of not getting any more work in feature films. 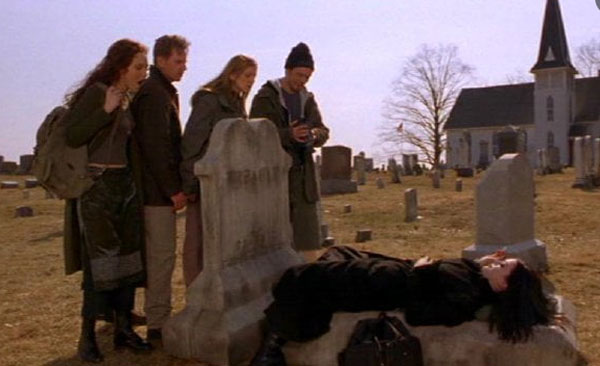 Visiting the last resting place of their careers.

Artisan Entertainment pushed out this dreck on the heels of BLAIR WITCH’s worldwide box office of $248 million (on a budget of $60,000!), doing exactly what the grifters in the movie are doing with their twig figures – trying to cash in on the latest fad. Zero creativity with the story, characters, direction, set dressing, dialogue – everything! It’s simply a B-movie hoisting itself on the cachet of another more creative, successful property. BLAIR WITCH was also a unique viewing experience that could not, and should not, be replicated, for the simple fact that its existence is predicated on the ambiguity of its reality. If another movie is made in the same shaky-cam vein (under the same banner), it will reek of venal replication. (See: BLAIR WITCH 2016.)

Joe Berlinger (known for his documentaries) co-writes and directs. I guess this just isn’t his wheelhouse, as he doesn’t know how to make it look NOT like a Hollywood movie. Supposed pitch black night in the woods is lit like a studio, with source-less reflected light coming from behind trees and paths way in the background; when two characters are in bed, there is a small wash-light illuminating their heads as they speak in this supposedly pitch dark night. This kind of stultifying convention only comes with being stalled in documentary mode. And Carter Burwell writes the score. Which is ironic, because in good movies, this unconventional composer’s scores lend an eerie, otherworldly air, and yet in this witchypoo setting, his music evokes nothing.

Movie ends with the police (led by curmudgeonly Lanny Flaherty) questioning the 20-somethings, without lawyers present, about the murders they were involved in, and showing them footage of their murders on their own cameras (that they committed while possessed, they claim). But why are the police doing this, as if they’re trying to convince the suspects of their own guilt? Homicide detectives just need to ARREST suspects, not prove to them why they are being arrested! This convention comes down to us from Peter Falk’s COLUMBO days – the detective outlining the process of the crime to the criminal, as if it’s part of police procedure, when in fact, it’s a TOTAL WASTE OF TIME. It’s the most idiotic part of an idiotic movie, and– ah, I get it: the cops are also possessed by the Blair Witch!