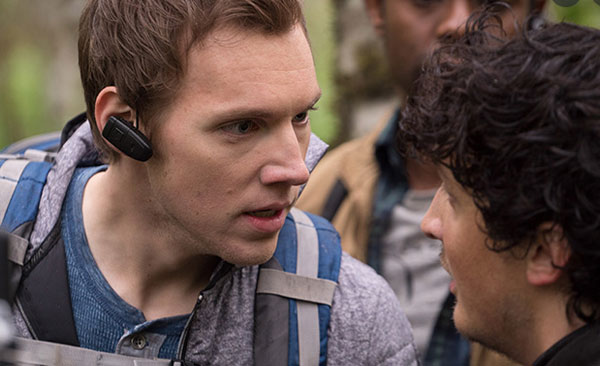 “Trust me: this camera in my ear is facing forward and level, has a wide field of view (even though my head should be obscuring half of it) and has batteries that don’t need replacing ever. Any questions, nerd?”

By 2016, the “found footage” craze had run outa steam. But someone forgot to tell director Adam Wingard, as he dives deliriously into BLAIR WITCH, using supposedly “found footage” to construct this thriller (woooow! So revolutionary!) from five different shaky-cams of doomed 20-somethings hiking the Burkittsville woods, trying to find the girl from the first movie.

James Allen McCune is James (a junior Jonathan Rhys Meyers), looking for his sister (Heather from BLAIR WITCH PROJECT) whom he viewed briefly in “found footage” (hey! Is found footage within found footage a Reality Show?) and now believes she is still lost in the woods. Callie Hernandez is Lisa, who is doing a student film on James looking for his sister, so supplies all the shakycams. Corbin Reid and Brandon Scott are the token black kids, and Wes Robinson and Valorie Curry are two other names you’ll never hear again.

And they hike into the woods. As predictable and irritating as you imagine it to be, through the tropes of loud noises, running shakycams, pitch black trees, stick figures, and lots of screaming, they were never seen again.

BOOK OF SHADOWS was a banal, by-the-numbers thriller that attempted to capitalize on the breakout BLAIR WITCH PROJECT. It was venal Hollywood glam-slamming our sphincters. But here, 16 years later, director Wingard (DEATH NOTE, YOU’RE NEXT) and writer Simon Barrett at least grasp at sincerity with BLAIR WITCH, re-creating the formula that made BLAIR WITCH PROJECT such a phenomenon: horrible editing, bad lighting, looking into camera, audio buzzes, out-of-focus shots, and lots and lots of shakycam. And the only reason it doesn’t work is because the novelty of shakycam has worn off. 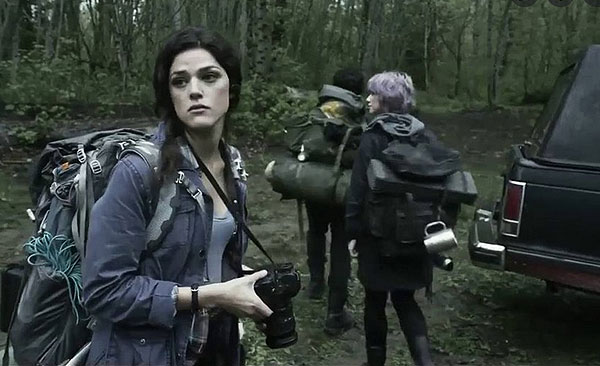 “Why isn’t my jawline getting me better A-list work? Ah, my boobs are too small…”

And it always bugs me on a meta level when these hunted, terrorized kids continue filming even in times of mortal danger. They’ve found a reasonable solution to this by making the shakycams tiny devices attached to their heads, so unlike a hand-held videocam that must be carried and pointed, these devices can be set-and-forget. The other side of that coin is: the dunderhead internet generation – in their haze of insensible narcissism – DO keep filming themselves no matter what duress they are under. Most of them do a shitty job admittedly (like, when an elephant attacks, the camera will swerve away just as the elephant takes off the guy’s head), though that ethos would be a reason for these knobs to keep filming no matter what, especially since they have Unlimited Movie Batteries in their shakycams.

A genuinely horrifying sequence is Lisa crawling through a subterranean dirt tunnel, not a constructed rounded pipe, just a hole in the soil that gets claustrophobically thinner as she goes. And she gets stuck. Primal fear!

Other than that one dread-inducing sequence, all the rest is the usual shakycam pap, with the biggest disconnect – as always – being that if this WAS, in fact, “found footage,” then the editor who put it together would try to do the slickest job possible, not leave the finished product in this unfinished raw format with cams turning on and off glaringly, buzzing and digital noise and tape skips, terrible audio and useless b-roll. If you are given footage to cut into a coherent film, you try your absolute best to make it as smooth and coherent as possible, not just throw it together like a kitchen mess. Found Footage apologists say, “Yes, but this terrible quality stuff IS the best footage they could cull from all the hours of film, to put this story together.” Sure, hon. And Reality Shows are actual reality.