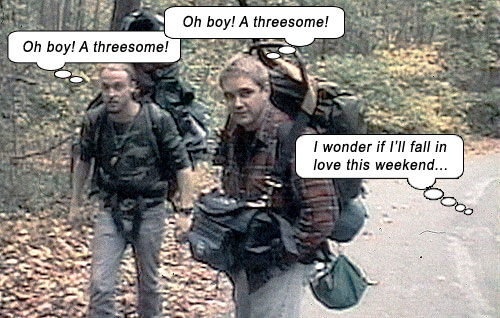 Give a shout out to marketing. And synergy. Internet in its infancy, Reality TV exploding, indie film, unknown actors, creation of a new genre (“found footage”) – THE BLAIR WITCH PROJECT hit the sweet spot of horror movie history during a perfect storm of cultural upheaval. Filmed for a buck-forty-five on hand held cameras with three actors who got paid a buck-forty-five, it is arguably the most successful film in cinematic history in terms of budget-to-revenue.

A genius marketing campaign that turned this simple, crummy home video into a cultural benchmark; claiming that a few years ago, three student filmmakers ventured into the woods near Burkittsville, Maryland, to film a documentary about a local legend – a witch that abducted children – and were never seen again; a year later, their footage was found and cut into this film…

Is it real? The title card says it is! No, but is it true? Well, the father of that abducted kid was interviewed for the trailer – it must be authentic! How do we find out if this is kosher? Can we use this new thing called “the in-ter-net” to find out? Uh, the internet tubes are saying it’s real… this is terrifying!… and how do I work this electronic mail thing again?…

Considering the writers-directors (Daniel Myrick and Eduardo Sanchez) were on a shoestring, even if they turned over the marketing to an actual company, their budget could not have supported giant firms who serviced Dreamworks or Paramount; their publicists were unknowns Clein + Walker (Harry Clein and Jeremy Walker). Now they’re known.

Same with the actors, all in their first film roles: Heather Donahue, Joshua Leonard and Michael Williams, pulling naturalistic performances that would scar the souls of Meryl Streep, Gary Oldman and Edward Norton. 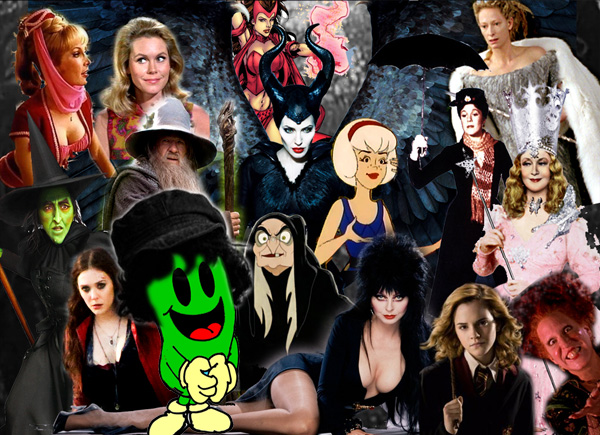 Poffy Donovan
Season Of The Witch

THE BLAIR WITCH PROJECT is a horror movie that seemingly doesn’t even know it’s one. Production values – non-existent; camerawork – shoddy; sound – inconsistent. Yet it is a case of that One Great Idea marketed well. Though every rough edge shows, marketing took those weaknesses and turned them into strengths. These kids are dead now, the marketing told us. It didn’t matter how badly they shot this video, they died at the hands of something in the woods. And “knowing” that compelling fact makes something as innocuous as a pile of stones cause our flesh to creep and a bundle of sticks cause our sphincters to loosen.

We are with these kids every rain-soaked step of the way through an unforgiving forest, lost for three days and nights, coming upon clearings (–sacrificial sites?) with sticks tied into the shapes of little men hanging from the trees, living through the horror-filled nights with indiscernible shouts in the night-black distance, waking to find pebbles arranged in a pile outside our tents… some unspeakable terror gnawing at our heels.

BLAIR WITCH arguably changed the shape of filmmaking. It made the world realize that you didn’t need the 50 million dollar budget and the craft services and the trailers and stylists, or even stars – just a load of creativity, resourcefulness and big balls. 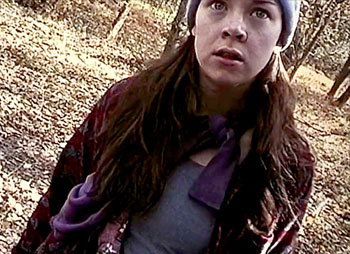 You go into the woods looking that cute,
you’re just ASKING to be haunted…

The best thing about this modern horror tale: BLAIR WITCH is inexplicable and unexplained. To all those fans who posit rabid explanations about the ending, the meaning, the legend, the curse, the blah – meaningless. It is not meant to be explained – just experienced. You feel the hairs rising on your little cucumber legs? Movie is a success. Go to lunch.

Unfortunately, when you do something this breakout and yet this outré, there isn’t much wiggle room for a varied career. Because these kids aren’t dead. They’ve still got to live and work in this wretched typecasting world. And how do they do that when audiences/ casting agents/ directors never see them as something other than the characters they seared into our skulls? Their “types” were ready-made for future movies (Heather the disarmingly hot girl-next-door, Josh the perennial stoner, and Mike the low rent Sean Astin – what am I saying? Even Sean Astin is the low rent Sean Astin!), yet ironically, these three kids did disappear. In 2014, Josh has been working constantly in mainly small productions, Heather “gave up acting in 2007” (‘gave up’ or ousted because she was losing her figure?), and Mike has done a handful of small productions, yet none of the kids achieved the success or recognition they experienced with BLAIR WITCH.

For them, the Blair Witch curse is totally real…