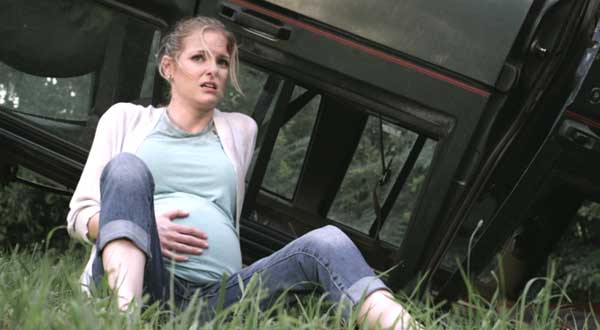 “Luckily, the baby cushioned my fall.”

BLEED opens with the hallmarks of a well-constructed thriller – in 1979, a young girl with a rune-like birthmark is hunted in a small American town for being able to talk to ghosts; in the present day, a pregnant woman with the same birthmark moves to that town. As a child, she and her twin brother regularly saw ghosts. And the townsfolk haven’t changed…

Very quickly, it goes downhill, as we realize the co-writer/director, Tripp Rhame, is simply trying to squeeze in as many horror movie tropes as possible, to make his debut feature film easy to pitch to investors, disregarding any kind of connecting tissue at all between each trope (‘woman finds notebook of dead girl,’ ‘friends uncover gravestone of little girl,’ ‘woman taking bath with ghost behind her,’ ‘running down corridors with shaky-cam,’ etc.). Now each investor wants to see their favorite trope represented – and Tripp trips over himself to please them…

Chelsey Crisp is Sarah (one of those perfectly-featured Millennial women from that Perfect Woman farm) and Michael Steger is husband Matt, who invite two friends to their housewarming, Dave and Bree (Elimu Nelson and Brittany Ishibashi, who share absolutely no chemistry as a black and Asian couple – they look and behave like extras); Sarah’s irresponsible brother Eric (Riley Smith) crashes the party with his hippiechick Skye (Lyndon Smith). (Why is it always 6 people in these modern horror movies? Always 6. Some mystical number that denotes low budget hackjob?)

When Eric reveals he and Sarah used to see ghosts as kids, she chastises him, and hubby Matt poo-poos him, prompting Eric to dare all of them to visit the nearby burned out abandoned prison (how convenient), where he would use his renowned ghosthunter skillz (shyeh royt) to summon the fried phantasms and make a monkey out of Matt.

Did I mention that while hippiechick was lazing in the bathtub, a ghost that looks like a cross between Rob Zombie and Jason Momoa (Raj Kala) tried to jumpscare us? Failed. Effects woefully bad.

When five of the friends are dropped off at the prison by Sarah, who then drives off, the plot cracks its skull on stupidity. Why did she drop them off? There were four cars at her house that any of the friends could have driven and left at the entrance. Was no one thinking this event through? That as soon as Sarah arrives home it would be dark and she’d have to turn around immediately to go pick them up?! What is the plan here?!

The plan is, the writer wanted his pitch scene of ‘ghost girl appears in passenger seat’ saying, “Help me!” which causes Sarah to swerve away from an oncoming truck and flip over. The truck keeps driving – because that’s what trucks do in real life after they barely avoid a car that flips over.

Meanwhile, at the prison, the plot has become unfathomable, as the five friends split up and experience badly-staged jumpscares courtesy of Jason Momoa. In flashbacks, we discover his name was Cannibal Kane, a good guy who tried to save the little girl from the rabid townsfolk. (Question: Was he called ‘Cannibal’ back then, or…? And if so – WHY?) Now he’s a ghost and presumably still on the side of good, because in the final scenes he tries to save Sarah’s baby from the town cultists, with fireballs from his eyes, and bolts of lightning from his arse, just like Braveheart said. I’m not EVEN joking.

Example of writer being confused as hell: If Cannibal is a good ghost – why does he kill Matt’s friend, Dave the black dude? (Is it because writer had to comply with horror movie rules of Black Dude Dies First?) And why does Cannibal make hippiechick stab Eric in the neck, when Eric is the biggest Belieber in ghosts and the most likely to communicate with him? After not making sense with that stabbing, movie continues to not make sense as Eric does what no human can do without medical facilities – staunches the blood spurting from his severed jugular by holding his hand on it and Acting Merely Hurt. Tripp has lost the plot completely by now. Proven by the Asian chick whining constantly that she doesn’t want to be left alone, then wandering off by herself. Should it matter that she is all alone and helpless, if Cannibal is a good ghost and protecting them? No, but he’s killing them. Why? Third base!

Husband Matt hikes back through forest, probably thinking it would’ve been more sensible to take anyone’s car to the prison instead of being dropped off by wife. What is the plan here? The plan, once again, is to achieve ‘single dude hiking through dark forest,’ no matter how idiotic the plot has to become to arrive at this pitch scene. And when lost in the forest, does anyone use cellphones in this year of our Lord 2016?

Sarah meanwhile, has osmosed into another movie altogether, with cultists almost as cuckoo as Scientologists trying to claim her baby as she births it. At this point, writer has achieved his final pitch scene of ‘pregnant woman on altar as sacrifice’ so all those characters milling aimlessly at the prison can just disappear… like ghosts. And how is any of this remotely related to the movie’s title, BLEED? Maybe Eric’s neck. Yes, but he stopped the bleeding, even though it was a fatal wound.

Tripp say: “You know what we need for finale? A big, long-haired muscled dude who can shoot fireballs from his eyes and bolts of lightning from his arse.” But Jason Momoa wouldn’t return his calls.